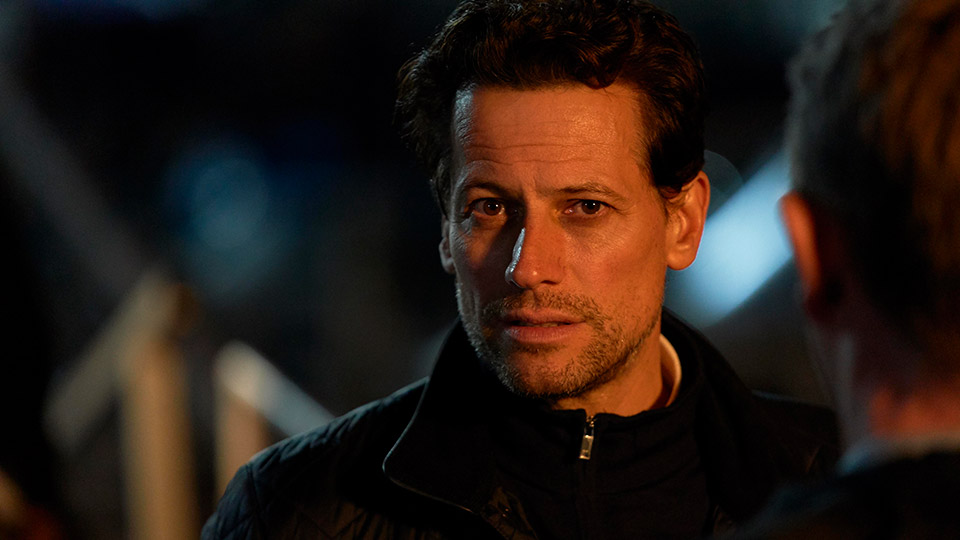 Karen (Katherine Kelly) took Laura (Joanne Froggatt) and her solicitor to be questioned and purposely made sure that Laura saw a file about Ian’s arrest on her desk. In the interview room Rory (Danny Webb) asked Laura if she wanted anything and Laura asked why Ian had been arrested.

Katy (Zoë Tapper) appeared distracted at work and was shouted at by a colleague. Another colleague told her that she had to go home as he could tell she’d been drinking. Katy tried to deny it and she got sent home.

During the interview Rory said he didn’t think that Laura was being honest with them. Karen asked about Andrew’s car and Laura refused to answer. The questioning turned to how the car key got into Laura’s home and she insisted she didn’t know. Karen revealed that the key had blood on it and when Laura reacted with shock, Karen terminated the interview and said she didn’t care what Andrew had done.

Karen informed Laura that she was to spend another night in a cell and the solicitor assured Laura that she would have her out in the morning. Laura was led back to her cell where her shoes were confiscated. She broke down in the cell and started lashing out.

Rory spoke to Karen about her insistence that Laura was guilty. They were interrupted by Rory’s son Greg (Jack Colgrave Hirst), who like his father worked for the police. Rory was then told the fingerprint analysis was back.

Jumping back to the time line where Andrew was still alive, the shady manipulator was visited by Ollie (Sam Spruell). Ollie told Andrew that he’d dropped the car key before asking his friend what his plan was. Andrew said he wasn’t sure but he was intending to disappear. Before Ollie left, he told Andrew that he saw Luke (Jamie Flatters) being rushed into surgery after allegedly trying to kill himself.

Andrew became hysterical and insisted that he was going to the hospital to see him. Ollie followed him off the boat, begging him not to go to the hospital but Andrew was adamant he could get in and out without being caught. Andrew asked Ollie to drive him to the hospital and then reminded him that he had leverage against him. Ollie reluctantly agreed and as they were leaving, they were spotted by Carl (Howard Charles).

The next morning at the police station, Laura was released from her cell and found Karen waiting outside for her. She was informed that she was being released on police bail for four weeks and given her belongings back. Karen showed Laura out of the police station and they were greeted by a media circus. Laura accused Karen of tipping the press off and Karen told her that it wasn’t just the police who had their eye on her now.

Rory and the police turned up at Ian’s work to arrest him, just as Ian had noticed a voicemail from Laura. He was told that he was being arrested for helping to dispose of Andrew’s body and as he was being read his rights, Laura tried to call him.

Liam (Richie Campbell) met Laura at the police station and told her that she was fine to stay in his spare room. Laura insisted on going back to her home and she got emotional as she talked about the situation. Liam reminded her that they didn’t have any hard evidence against her because otherwise they wouldn’t have let her go.

Ollie dropped Andrew off at the hospital and Andrew made his way in, just missing Katy. He was caught on security cameras but due to wearing a cap, it was difficult to identify him. As he made his way to his son, Andrew did his best to avoid Katy so he wasn’t spotted. He saw the details for Luke’s room and quickly made his way through the trauma ward.

Arriving at his son’s bed side, Andrew discovered that Luke was on life support and he broke down, apologising for what he’d made his son do. He then blamed Laura for everything that had happened but stopped speaking when he realised Katy was on her way into the room. Andrew hid in the toilet holding a scalpel while Katy checked Luke. Once Katy was gone, he told Luke he loved him and left the hospital.

Laura arrived at her home and the press were waiting for her. She was told that Ian had been arrested and after letting the press know she was shocked at the news, she ran inside the house where she tried to call Ian but got his voicemail.

Ian was interviewed by Karen and he told her that he knew she was trying to get him to say something about Laura. Karen then spoke to Rory and they discussed that Andrew’s body couldn’t have got out to the marshes with only one person moving it. Ian asked for his solicitor and refused to answer anything but Karen revealed that she knew about the time he beat Alexander Slater and put him in intensive care.

Changing tack, Karen told Ian that Andrew’s key was found in Laura’s flat with Andrew’s blood on it and Ian’s fingerprints. At that shock revelation, Ian’s lawyer arrived.

Laura met with Vanessa (Shelly Conn) and asked for her help finding out what Ian has a criminal record for. Vanessa refused to help and Laura told her that she was questioning her judgement of men, and needed to know if Ian was a good man. She guilted Vanessa by telling her that she owed her.

Katy continued drinking herself into oblivion at home and she made a trip out to the shops to get more booze. When the bag of bottles fell over while she was driving, Katy’s attention turned to those and she almost hit a woman with a pram. That looked like it might be the wake-up call she needed and she returned home where she threw out all the bottles, and cleared up her flat. She then called someone and asked for help.

Winnie (Amy Nuttall) turned up at Carl’s place of work and asked him why he hadn’t turned up to their session. She reminded him that she was the one that was raped and he reacted angrily. He then told her that she needed to know something but then refused to say anything. Winnie pushed but he told her he had work to do and walked off.

Jumping back to Andrew, he got into Ollie’s car and they drove to Laura’s home. Ollie realised where they were and waited in the car while Andrew broke into the house. He entered via an open window and while he was in the house, Laura arrived home. Andrew watched on and Winnie arrived, who revealed she works with Katy and that she wanted to talk to Laura. She then dropped the bomb that she was one of Andrew’s victims too.

When Laura left the house, Andrew continued to snoop around and took one of her necklaces.

Vanessa did dig into Ian and told Laura that he had put Alexander Slater into intensive care. She didn’t know why he did it and Laura couldn’t believe it. Vanessa also told Laura that Ian’s fingerprints were on the car key.

Katy’s cry for help was to Liam, who went around to her flat and listened to her as she told him that she’d been drinking to get through the day. She broke down and apologised, promising to sort herself out. Liam said he would be there to help her and assured her that she wasn’t on her own. Katy asked him not to tell Laura what was going on.

Ian was released by the police and he met Laura at the beach. She asked him about what he did to Alexander. Ian explained that the man was making fun of his disabled sister and he lost his rag. He said he was going to tell her and Laura wanted to know when he had been planning to tell her. Laura then jumped to the car key and Ian said he touched the key by accident while looking for a charger in Laura’s drawer.

Ian then said the police had found evidence that he was at work at the time that Andrew’s body was dumped. He suggested that he and Laura go their separate ways if Laura can’t trust him.

Rory got home and his son was waiting for him, eager to speak but not at home. They decided to go to the pub.

Carl watched the TV and saw Karen giving a press conference. Karen revealed that they had a new suspect and an arrest was pending in the next few days. As Winnie slept. Carl went to the boat yard where he poured gasoline over the building he worked in. He then set it on fire and did the same with his boat.

The police and the fire brigade arrived at the boat yard as Carl seemed to be making an exit.

Jumping back again to Ollie and Andrew, Ollie asked his friend if he would have killed Laura if she’d caught him. Andrew said he wouldn’t have murdered her and suggested that if he got hold of the recordings and destroyed them, he might be able to get away with it. The friends embraced and said their goodbyes.

Andrew got on his boat and Carl was waiting for him, and made he it clear he knew what Andrew had done to Winnie.