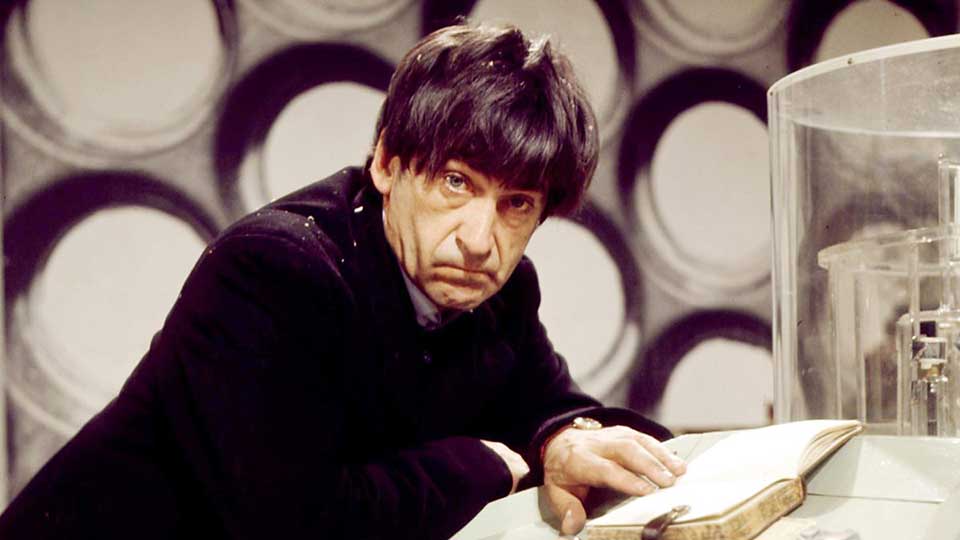 On March 25th 2020, it is exactly one hundred years since the birth of Patrick Troughton, the British actor best-remembered for his role as the second actor to play Doctor Who. He took over the part from William Hartnell in 1966 and left in 1969 after three remarkable seasons of adventures. But his work on the show was never forgotten.

Although Troughton was a definitive character actor, excelling at playing both heroes and villains, and scrupulously avoiding type-casting, the cult status that Doctor Who achieved ensured that it was a role he never truly left behind. He returned to the show three times, in The Three Doctors (1972), The Five Doctors (1983) and The Two Doctors (1985). Towards the end of his life, he overcame his shyness and instinct for privacy to become a stalwart on the convention circuit, and indeed, would suffer a fatal heart attack whilst attending a Doctor Who convention in America in 1987.

It’s hard to believe that Patrick Troughton has been gone for over three decades, and we wrote our tribute to his versatility as an actor to remember him on the 30th anniversary of his passing. But his legacy lives on in the extraordinary body of television and film work he left behind, as well as in the distinction his children and grandchildren have achieved, both in acting and in cricket! His son Michael’s remarkable biography delves deeper into the life of an actor who preferred to retain the mystery.

So to celebrate his centenary, here is our choice of Patrick Troughton’s top ten best Doctor Who stories, one for each decade since his birth!

10. The Power of the Daleks

Patrick Troughton’s first outing as The Doctor was a strong one, and it quickly established him in the part in the eyes of the viewing public, who had never previously experienced regeneration. His earliest episodes see the new Doctor in a slightly more manic guise than the loveable and impish scruff he would later become. Supported by companions Anneke Wills and Michael Craze, the Doctor faces his deadliest enemy in a missing story that was recently animated.

9. The Seeds of Death

This title was one of the earliest releases to VHS in the late 1980s, which adds an extra layer of nostalgia all of its own. It was, for many post-1960s fans, their introduction to the magical world of the Second Doctor. The Ice Warriors are an effective and brutal opponent, taking over a moon base and keeping humans captive. They look better than in their first outing, with masks that fit the actors more convincingly. Plenty of action and adventure sustains the six episodes.

Five of the six episodes of this serial are now known to exist, when they were returned to the archives along with all six episodes of The Enemy of the World in 2013 – the show’s 50th anniversary. The action-heavy episode four, with superb direction by Douglas Camfield, is a standout, when the Yeti attack. If only that final missing episode had been unearthed! It’s so frustrating that it remains incomplete. Thankfully, the sets of the London Underground are effective, since there’s an awful lot of filming in tunnels.

OK, so Peter Davison was the incumbent Doctor for this one, but what’s not to love about the extravaganza of the Twentieth Anniversary special? Pat’s part in it mostly saw him filming in freezing conditions in Wales, but it reunited him with Nicholas Courtney (the Brigadier). The interplay with Jon Pertwee in the final sequences is one of the highlights of this romp, continuing the banter and rivalry they had established in The Three Doctors a decade earlier. Troughton would be brought back once more to the part in 1985’s The Two Doctors, but for our money, The Five Doctors is his best return story.

One of the strangest and most imaginative Doctor Who stories of all time, The Mind Robber is classic 1960s psychedelia, mixing fairytales together in a strange land of fiction. The opening episode (penned as a filler by future producer Derrick Sherwin) is tense and gripping. Using only the TARDIS crew, it sustains over twenty increasingly sinister minutes as the Doctor’s companions are lured outside into an unknown world. Troughton’s performance as he fights the alien menace inside the TARDIS demonstrates the intensity and gravitas he brought to the role, which lay behind his usually affable demeanour.

5. Fury from the Deep

This missing classic tends to top fans’ wish-lists of episodes to be discovered. It is the archetypal Second Doctor base-under-siege story, but with a memorable seaweed monster. What little footage survives looks excellent. The novelisation by Victor Pemberton also brought the story to life, in one of the best adaptations of the serials ever written. Thankfully, the soundtrack survives, so the story can still be partially enjoyed. It has recently been animated.

4. The Evil of the Daleks

The second outing against the Daleks saw the production team merge the Doctor’s greatest enemy with a Victorian setting. From the one surviving episode, it’s clear that Evil of the Daleks is a strong story with an intriguing premise. It also introduces Deborah Watling as Victoria, the Doctor’s Nineteenth Century travelling companion, who is to begin with held captive by the Daleks. The final showdown gives the story an epic quality.

The eight-episode adventure is Troughton’s final encounter with the Cybermen, the enemy he met the most frequently (four times in total). Director Douglas Camfield again gives the small budget a cinematic flavour, with some superb action sequences. The Doctor’s scared little jumps as he runs away from Cyber explosions is pure, classic Troughton. The sequences of the Cybermen emerging from the sewers outside St Paul’s Cathedral are amongst the most iconic in the series’ history, though this footage is bettered by the UNIT fight with the Cybermen at the warehouse. The show began to break new boundaries and expand the limits of what it was capable of and set things up neatly for Troughton’s successor, Jon Pertwee.

The ten-episode epic that Patrick Troughton went out on was famously written over a frantic weekend by Terrance Dicks and Malcolm Hulke when other scripts were deemed unworkable. Although there is padding-aplenty, The War Games is hugely ambitious and sustains over the course of four hours. What seems to be a World War One story evolves into an adventure involving the Doctor’s own people, and his identity as a Time Lord is finally revealed. The climactic episode, in which the Doctor parts from his companions, is poignant, yet his forced regeneration leaves viewers on a sinister cliffhanger.

1. The Tomb of the Cybermen

It’s hard to separate The Tomb of the Cybermen from the excitement of its discovery in the early 1990s, which was easily the most exciting find in the history of missing episodes being returned to the archives. The end product lives up to the hype, and older fans found that the memory didn’t cheat after all. This story has in abundance everything that is great about Doctor Who: an intriguing premise, a sustained atmosphere of menace, a memorable villain and a first class supporting cast. There are so many small great moments in The Tomb of the Cybermen that help to make it special, and almost all of them are touches of class from Troughton. On modern television sets, of course we can now see the artifice of some of the special effects, but as adults we already watch with a suspension of disbelief. Over fifty years after it was made, joining the Doctor and the archeologists as they open up the tombs and release a terrifying menace is as thrilling as ever, and a great introduction to the black and white era for the not-we.

We hope you like our choices, though there are plenty of other great Patrick Troughton Doctor Who stories. But on Wednesday 25th March, on the great man’s centenary, we will be sticking on The Tomb of the Cybermen and raising a glass to the memory of a great actor, a brilliant man: our unforgettable Second Doctor. How will you celebrate?

In this article:BBC, Doctor Who, Patrick Troughton