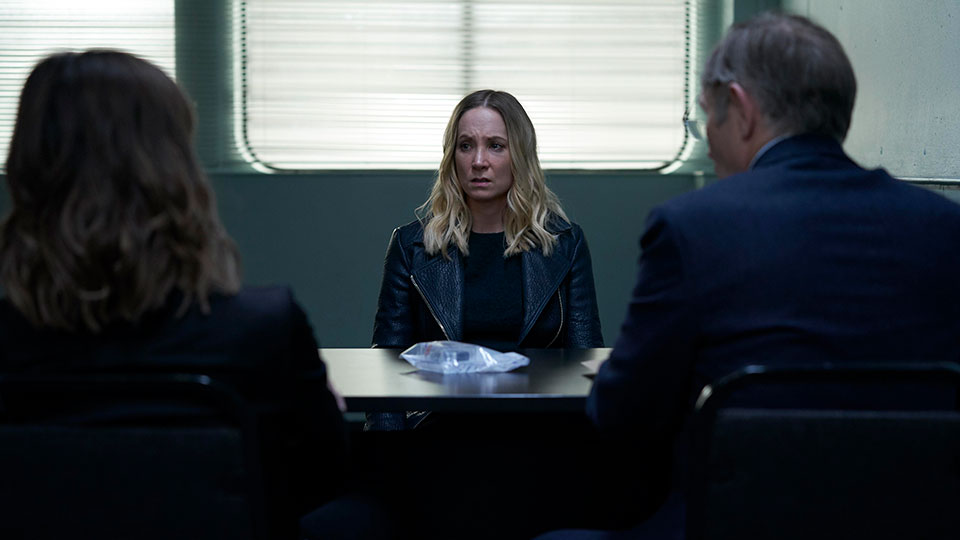 The murder of Andrew Earlham (Ioan Gruffudd) meant that Laura (Joanna Froggatt) couldn’t escape her ordeal in the series 2 premiere of Liar.

The episode opened with Laura back at work and looking in a much better state than we last saw her. It was quickly revealed that what we were seeing was flashback and Laura was working a parents’ evening where she met Andrew. She told Andrew that his son Luke (Jamie Flatters) was having issues, and Andrew informed her that it was the day before the sixth anniversary of the death of Luke’s mother.

The action then jumped forward to the present day where DI Karen Renton (Katherine Kelly) was on the marshes with the police, having found Andrew’s dead body. His throat had been cut and he’d been missing for over 3 weeks. Karen asked if Andrew could have done it to himself and the forensic team said it was possible but unlikely.

The next morning Laura was looking pretty loved-up with Ian (Kieran Bew) and it looked like their relationship was charging full-steam ahead. During a lesson Laura was interrupted and told there were people waiting to see her. It turned out to be Karen and she told Laura that they’d found Andrew’s body, believing he’d been murdered at 6am the day before citing his smashed watch as evidence.

Karen pressed Laura to find out when she last saw Andrew and made it clear that she would be speaking to all of the people close to her. Laura told Karen that she didn’t know or care how Andrew had died.

The story jumped backwards by three weeks and it was revealed that Andrew was tipped off by Mia (Ivana Basic) that Laura had arrived at the house to collect something from the shed. Andrew tried to contain his panic by playing it cool with Mia on the phone and trying to act normal when Luke arrived in the kitchen. He excused himself saying there was an emergency at the hospital and went to his room to pack his things.

Before leaving Andrew had an impromptu heart-to-heart with Luke who asked him why he was behaving weird. After telling him he loved him, Andrew left the house, put on a baseball cap and headed off.

Reverting back to the present day, Carl Peterson (Howard Charles) and Winnie (Amy Nuttall) were watching the news when they found out that Andrew had been murdered. DI Vanessa Harmon (Shelley Conn) and her partner Jennifer Robertson (Jill Halfpenny) also found out about the news with Jennifer delighted but Vanessa saying it didn’t change anything. Laura’s sister Katy (Zoë Tapper) also found out the news.

Karen called in DS Rory Maxwell (Danny Webb) to help her with the murder investigation. He tried to refuse but she made it clear that she wasn’t asking him. Karen took Rory through the little evidence they had and pointed out there was lots of suspects that could have done the murder. She then handed him a file on Ian.

Laura received a call from Katy’s husband Liam (Richie Campbell), who asked if she’d heard from Katy. He told Laura that Katy hadn’t turned up to pick up the boys and wasn’t returning his calls. Laura promised to go and check on her sister, who was cooped up at home and drinking, and she was shocked by the state of the house. Katy tried to pass it off as having slept in and things got testy quickly between the sisters whose relationship had been pulled apart by Katy’s affair with Laura’s ex-boyfriend Tom.

Continuing the storyline from three weeks earlier, the police turned up at Andrew’s house and Luke told them he wasn’t at the house. Andrew walked around a boat yard and called his friend Larry before hiding something under a barrel. Rory quizzed Luke and told him that he knew he’d lied about being his dad’s alibi. Luke said again that he didn’t know where his father was and when Rory spotted a picture of Andrew’s boat on the fridge, he asked Luke to tell him where the boat was moored.

Andrew was indeed at his boat and the reality of what had been going on hit Luke, who broke down in tears as the police searched the house. As Rory and his team pulled into the boat yard, Andrew tried to think of an escape plan. The police beat down the door of the boat and it turns out Andrew was on board a different one – the one belonging to his friend Larry who he’d spoken to on the phone.

As he continued to hide out on Larry’s boat, Andrew called another friend Oliver Graham (Sam Spruell). Andrew asked his friend to pick up a bag and his car from the hospital he worked at. When Ollie turned him down, Andrew pointed out he’d helped him before and promised if he did this favour for him, he’d never contact him again. Despite being based in Edinburgh, Ollie agreed to do the 7-hour journey and Andrew vowed to get Laura back.

Rory and Karen visited Ian to speak to him about Andrew’s murder. Karen immediately asked about his relationship with Laura and he revealed they’d been together for about a month. They asked about how he felt towards Andrew and revealed that he’d put a man called Alexander Slater in hospital 9 years earlier. Karen reminded him that they could check all of his records to see if he’d been lying and that they’d uncover any links he had to Andrew.

Andrew insisted he had nothing to do with Andrew’s death and showed Karen and Rory the door. What’s he hiding then? Rory received a call from Vanessa as they left and she said she had something to tell him about Laura and Andrew.

Karen and Rory turned up at Laura’s house with a search warrant and they told her they knew what had happened between her Andrew and Vanessa. Laura called Vanessa angrily and Vanessa told her that she’d been suspended for not reporting the incident.

The search of Laura’s house turned up some evidence but it wasn’t disclosed what that was to viewers. Instead we saw Karen react with ‘wow’.

We then found out who Winnie was and how she fit into the picture. Winnie was one of Andrew’s victims and her rape had caused problems in her relationship with Carl. It was clear that Carl had blamed himself for how he behaved following the rape and we saw him cleaning blood off a hook inside a boat. Could he have had something to do with Andrew’s murder?

Karen and Rory told Laura that they needed her to come down to the station because the evidence they’d found was Andrew’s car key. Laura claimed she’d never seen it before and Karen told her if she didn’t go to the station willingly, she’d have to arrest her.

Jumping back again, we saw Ollie arrive at the boat yard and pick up Andrew’s ID card, which is what Andrew had hidden there earlier in the episode. Ollie went to the hospital and called Andrew to guide him. Ollie admitted that he didn’t like doing this but Andrew assured him if he did as he was asked, he wouldn’t contact him again.

Ollie managed to get to Andrew’s locker where he found money and dropped Andrew’s car key. He had to hide when Katy walked into the locker room and picked up the key from the floor. As Ollie tried to exit the hospital, he walked past Katy who was wheeling in a seriously injured Luke.

During her interview with Karen and Rory, Laura became agitated quickly. She claimed that someone had planted the key in her house and blamed the police for not giving her adequate protection. When she said she was tired, Karen twisted her words in a bid to try and get her to confess.

Laura realised what was happening and made it clear she wouldn’t confess to something she didn’t do. Karen announced that she was arresting Laura for Andrew’s murder. Laura was processed and locked in a cell. Rory wasn’t happy that Karen arrested Laura without telling him that’s what she was going to do. Karen told him that she was trying to throw her off balance to get more information out of her.

Laura called Liam for help and he told her that they would have to let her go within 48 hours unless they found real evidence tying her to the murder. She protested her innocence again and Liam reminded her that Andrew had lots of enemies.

We saw glimpses of all of those enemies as Laura vowed not to take the fall for Andrew’s murder.

As the episode drew to a close, we jumped back to the parents’ evening where Andrew and Laura had been chatting about Luke. Andrew said Luke was like him, someone who had to win at any cost. Laura said she was similar but given her predicament in the present day, can she finally beat Andrew?