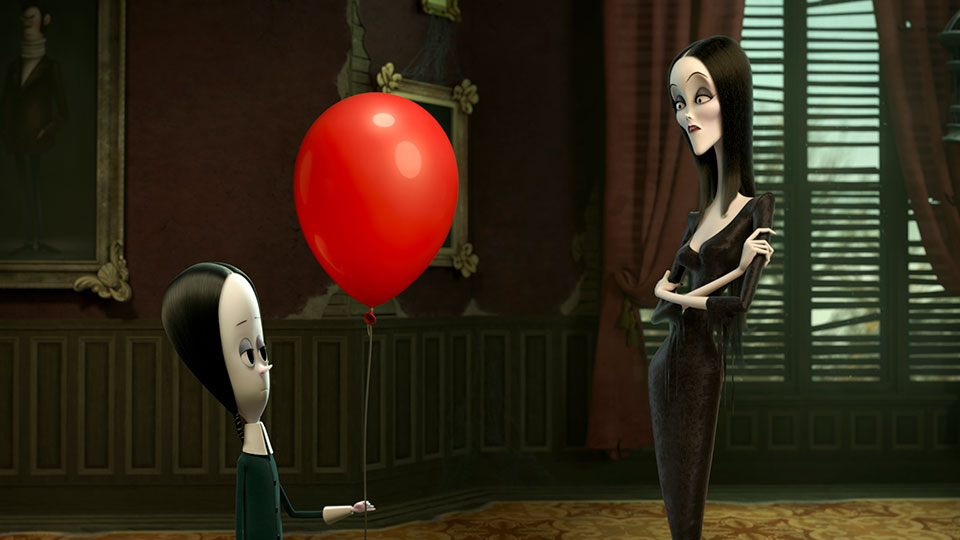 Gomez (Oscar Isaac) and Morticia (Charlize Theron) Addams are interrupted during their wedding ceremony and driven out of their home by angry members of the community. They manage to escape and move to a derelict mansion in New Jersey. They soon catch the attention of reality TV host Margaux Needler (Allison Janney) who wants to make over the mansion so it fits with her new Assimiliation community. When they refuse to let her renovate the house, Margaux steps up her plans to drive the family out of town.

The Addams Family franchise has been dormant for a while. In the early 90s it was resurrected for two big screen outings starring Anjelica Huston and Raul Julia but a third movie in 1998, Addams Family Reunion, recast the actors following the death of Julia and went straight to video. Plans to bring an animated movie to the screen have been mooted for nearly a decade and finally in 2019 The Addams Family was released. Now the film is coming to digital download, DVD and Blu-ray but has it been worth the wait?

Commercially the film performed decently at the box office so another film is planned for release in 2021. Critically it received a very mixed reception and it divided long-time fans of the franchise. Starting off strongly, digging into an origin of sorts for the family, The Addams Family provides a decent set-up establishing the characters and the unusual dynamic they have with one another. The Addams Family has always lent itself to the darker leanings of its source material and sadly those have been a little bit lost in this new film.

While there are still some ghoulish and twisted moments to enjoy, the story pulls the family into a disappointingly generic plot. The battle between Margaux and the Addams Family will seem familiar, as a similar storyline has been used in dozens of animated family movies over the years. That’s not to say there isn’t some fun to be had though. Chloë Grace Moretz is the star of the show, bringing Wednesday sardonic personality to life but unfortunately her character is pushed into a sub-plot that detracts from the main storyline.

The rest of the voice cast are solid enough. Charlize Theron and Oscar Isaac have chemistry as Morticia and Gomez and Nick Kroll is wacky as Uncle Fester. The always reliable Allison Janney relishes being bad as Margaux and Bette Midler adds a little star power into the mix as Grandma. Finn Wolfhard, best-known for Stranger Things, is a bit forgettable as Pugsley but that could very well be to do with how little material he gets.

Special features on the Blu-ray release include deleted and extended scenes, Charades with Thing, three short featurettes about the film and the history of the film, and two lyric videos.

The Addams Family did enough to get a sequel but whether it’ll have the same pull as this one did, remains to be seen. I hope that the next film is a lot darker than this one was, and takes inspiration from the early 90s movies. The Addams Family are at their best when they’re being menacingly weird and the lack of that here is the film’s biggest problem.