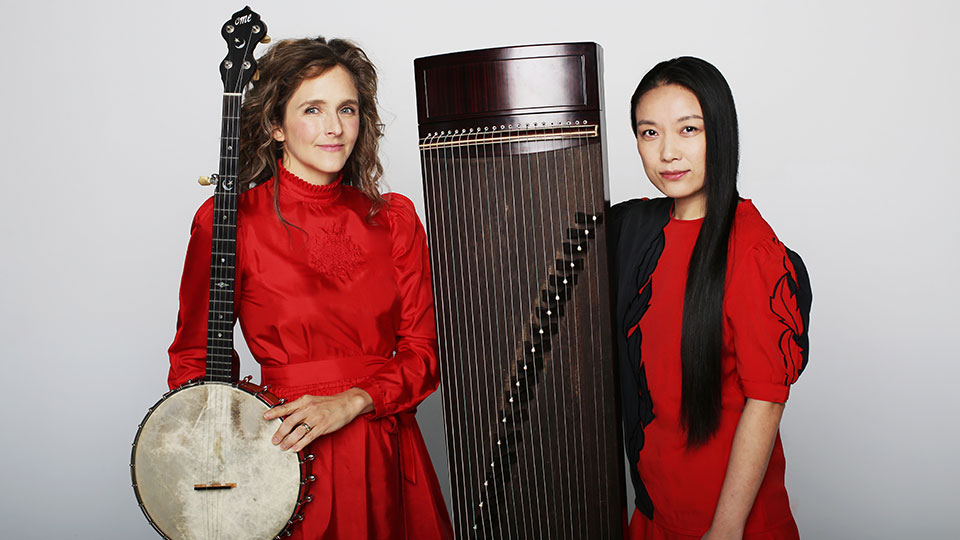 Wu Fei and Abigail Washburn will release their self-titled debut album as a duo on 3rd April on Smithsonian Folkways.

The new collaboration sees the artists merging American old-time music and Chinese folksong. Together they have created gorgeous, impressionistic renditions of traditional material from the hills of Appalachia to the prairies of Xinjian province with each tune flowing seamlessly into the next.

The track Water is Wide / Wusuli Boat Song is available now and it showcases the duo’s ability to weave together a traditional tune of Scottish and Irish immigrants whose lyrics and melody were passed along in the oral tradition of the eastern seaboard of the US, and a Chinese folk song recently attributed to the Hezhe people after decades of misattribution to the Han majority.

Wu Fei said of the track: “It is my honor to share Wusuli Boat song, a folk song from the Nanai people (aka Hezhe 赫哲族) who have lived on the Wusuli River (or Ussuri River) bank for hundreds of years. Weaving this song with Water Is Wide, sung by Abigail Washburn, has made me realize how much people all over the world have to share.”

Around the album release the duo can be seen performing at the following dates:

They said of the origins of their collaboration: “We found one another in our late 20s, when our musical paths crossed in a little mountain town in Colorado. We jammed on American and Chinese folksongs and fast became friends. Over the years, we met at different stops on the road, and we joined up for our first duo concert in Beijing in 2009. Shortly after, we both got married, had babies, and started juggling the life of motherhood and professional music-making. Wu Fei moved with her family to Nashville in 2014, and we began meeting on Abigail’s porch to weave stories of motherhood, music, and folksongs of both cultures. In 2017, we birthed the music of this record in Abigail’s basement with her husband, Béla Fleck, producing. This music is a labor of love over more than 10 years of friendship and shared life paths, and we are so glad you want to share it with us.”

The album is available to pre-order now.

In this article:Abigail Washburn, Wu Fei