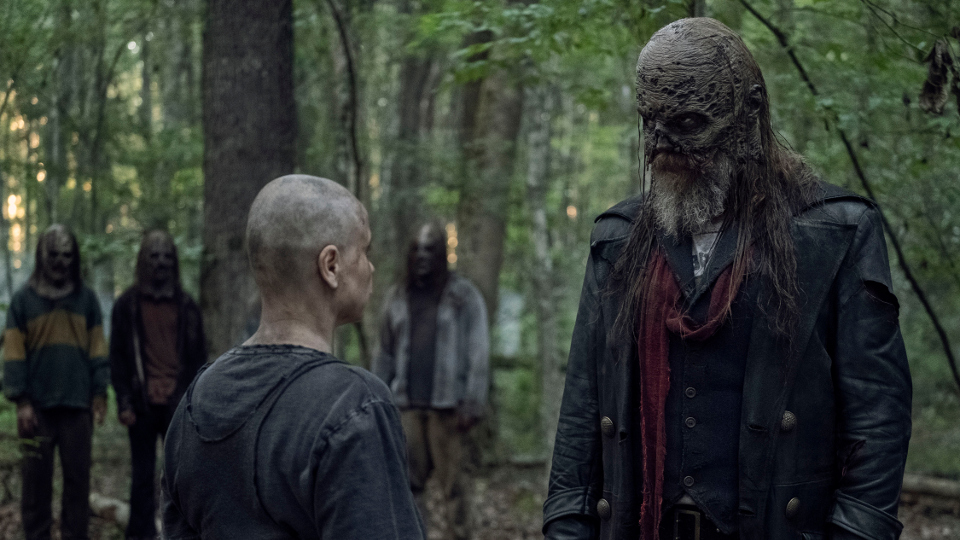 The second half of The Walking Dead season 10 got underway earlier this week. The episode saw the survivors trapped by Alpha (Samantha Morton) trying to escape the cave.

The episode opened up with Aaron (Ross Marquand), Daryl (Norman Reedus), Carol (Melissa McBride), Jerry (Cooper Andrews), Connie (Lauren Ridloff), Kelly (Angel Theory) and Magna (Nadia Hilker) all still stuck in the cave surrounded by Alpha’s walkers. The cave was really dark and the group only had very limited light sources. As they took their time to look around, Jerry noticed Alpha looking down on them. He gave the nod to Carol who looked up before letting out a mighty scream of frustration at Alpha getting the better of them.

Alpha left them for dead and told her Whisperer followers outside to make sure the group didn’t get out. With too many walkers to kill (Although I’m sure Rick Grimes would have had a good go with his trusty axe), Daryl decided it was best to try and find a way out instead. The best plan involved everyone jumping across several stone pillars. Somehow, despite the walkers best efforts, everyone made it across ok.

They were then able to climb up a bit and leave the undead cave behind. Now they just had to find their way through the many tunnels. Daryl used some matches and watched the flame to work out the best way to go. Carol started to struggle due to being claustrophobic. Daryl had a chat with Carol and basically told her she needed to stop being so reckless and let her vendetta towards Alpha go. Carol promised that she would. When the group stopped to rest, Magna had a try with the matches as well. Instead of freedom though, she found a group of whisperers. They were no match for the survivors though and it gave them a renewed confidence that if whisperers could get in then there must be a way out.

Eventually Daryl found a way out but it involved crawling through some rather tiny spaces. This was tough for Carol but worst for Jerry due to his larger frame. He was the last to go and thought he heard something. Using a windup torch for light he discovered a few walkers were closing in on him. He tried to move quicker to get to the others but became stuck. He managed to remove his armour while walkers were biting at his feet and eventually got out. Fortunately his boots were tough enough to prevent him getting bitten.

Seemingly out of danger, Magna moved towards some light and was saved in the nick of time by Daryl. Another step further and she would have stepped off a ledge and fallen back into the pit of walkers. The pushed on a different way and discovered an abandoned mine shaft. Kelly spotted a box all covered up and inside discovered a load of sticks of dynamite. Jerry suggested they leave it alone. Instead they grabbed some tools and began to dig to the surface. They soon broke through and got to work on making a hole wide enough to escape through.

Daryl suddenly realised that Carol was missing. Of course she’d already gone back on her promise and set off with some dynamite to try and destroy the horde. Daryl found her just in time as she slipped and almost got herself killed. They headed back to the group and began to escape. Things took a turn for the worse when the dynamite Carol took exploded and the mine shaft began to collapse. Jerry managed to hold the roof up for most of them to get out. As he escaped, the roof caved in and Connie and Magna were left behind and their fate is uncertain.

Outside Carol realised it was all her fault and broke down. Daryl tried to dig through the rubble to rescue Connie and Magna but had to give up. He sent the others back home but stayed to see if he could find a different way back in.

Elsewhere in the episode, Alpha thought that someone was spying on her camp. Negan (Jeffrey Dean Morgan) suggested that there was a traitor amongst them and pointed the finger at Gamma (Thora Birch). Alpha wasn’t convinced at first but the more she thought about it the more it made sense. When Gamma didn’t return she sent Beta (Ryan Hurst) to hunt her down and bring her back for punishment.

Alpha decided that Negan deserved a reward for his insight and took him to the edge of camp. Presuming he was in trouble, Negan couldn’t stop talking and feared punishment or death when Alpha told him to strip with his back to her. When he turned round he was surprised to find Alpha naked apart from her creepy mask and socks. Negan left his socks on too and Alpha rewarded him with sex. Negan wondered if she was going to cut off his head afterwards and also if she would keep the mask on. He realised he was kind of turned on by the whole thing and decided to just go with it. Ewww.

Can’t wait for the next episode? Read our preview of The Walking Dead – 10×10 Stalker.