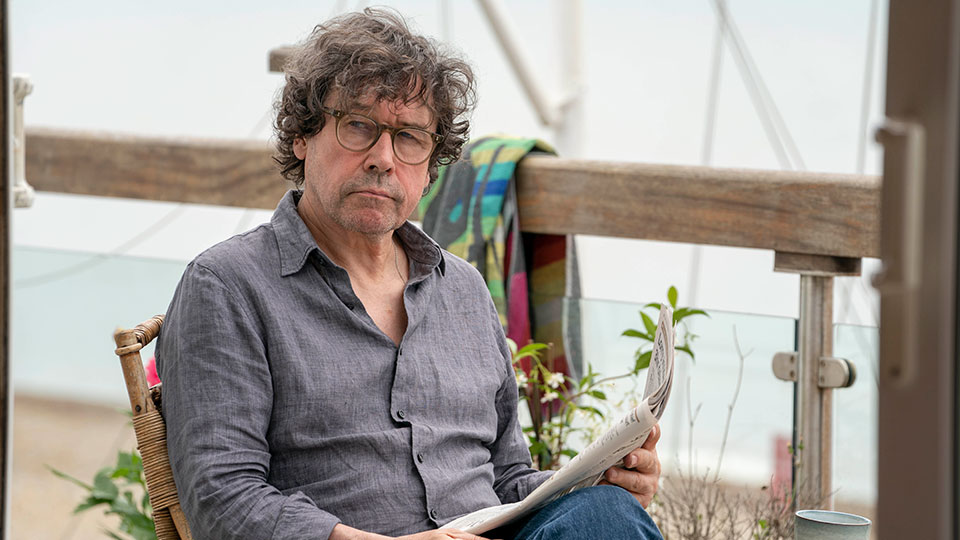 Following tonight’s episode of Flesh and Blood, we think we might now who the victim of the incident is.

Following a run on the beach, Vivien was greeted by Mary who congratulated her on marrying Mark (Stephen Rea). Mary asked about the car being set on fire and Vivien said Mark had reported it before revealing her plans to go to India.

Mary called it the ‘end of an era’ but Vivien promised to stay in touch as she went to speak to Mark. Mary exchanged angry glances with Mark before returning home.

In the present day it was Jake’s (Russell Tovey) turn to be quizzed by the police, who wanted to know what his late father was like.

In the flashbacks Jake had a run in with Leila (Lara Rossi) when he turned up to pick his kids up on a day that he wasn’t supposed to. Helen (Claudie Blakley) called Natalie (Lydia Leonard) to update her on her problems with George (Keir Charles) and to find out when Lily (Grace Hogg-Robinson) was coming home. George interrupted Helen and told her that he was leaving the house for some space but maintained that he wasn’t having an affair.

As they argued, George described the woman he’d been in the pub with and Helen realised that it was Meera (Clara Indrani). Helen told George she now believed he hadn’t slept with her and called HR to take action against Meera but George left saying it didn’t change anything.

Natalie and Tony (Vincent Regan) hooked up again and she pressed him on his feelings for his wife. He evaded her and quickly left, telling her to leave things with him to sort.

The police asked Jake about his feelings towards Mark and he said it was none of his business. Jumping back to the story unfolding, Jake told Stella (Sharon Small) that he thought Mark bought the car on credit and set fire to it.

Vivien and Mark enjoyed a stroll along the cliffs and talked about the test results that Vivien was expecting to receive the next day. She asked Mark to let her cook supper that night and the two stopped to have a picnic. Mark promised Vivien that if the tests were bad news, he wasn’t going to leave her side.

Mary continued to behave creepily by pulling a box out from under her bed that contained items from Vivien’s children including paintings they’d done for her when they were young. Mary let herself into Vivien’s house again and spied on Mark in the shower. She pushed his aftershave bottle onto the floor and smashed it before making a quick exit.

Helen followed up her complaint about Meera and grew angry when she was told it wasn’t a criminal matter. She was warned not to go public with it and told to concentrate on putting her family back together.

When Vivien got home, Mary popped over to find out how her test results were. It was revealed that the tests came back all clear. Mary gave Vivien the painting Natalie did as a child and Mark didn’t look happy for have her in the house again. Before she left, Mary offered to take some bags down to the charity shop for Vivien and once she’d gone Mark complained about her always popping around.

Stella guided Jake through an email to Leila to help him make amends with her. Surely there’s something else going on with Stella isn’t there?

Helen paid a visit to Meera who was moving her family out of their home saying she couldn’t afford to live there since losing her husband and her job. An attempt to confront Meera didn’t really work and Helen left.

Jake helped his mother in the gym and they had a heart-to-heart about his troubles with Leila. He used that as an excuse to turn the conversation to Mark and Vivien told him that she didn’t plan for things to move as quickly as they had. Jake asked what Mark’s daughter name was and she told him it was Sophie. When Jake pushed the issue about if she’d had contact with Sophie, Vivien shut him down.

While Vivien was out, Mark kept an eye on Mary and down at the beach Natalie spied on Tony and his wife, who she saw kissing.

That evening Mary emptied the bags of clothes she’d taken from Vivien’s and looked through them. They contained clothes that the kids had worn when they were younger and a delighted Mary took some scissors to them.

Mark wanted to talk Vivien through the itinerary for their trip to India but she asked if it could wait. She shared her concerns about the kids and the length of time they were planning to be on holiday. As Mark tried to put Vivien’s mind at ease, she asked to see a photo of his daughter and he said he didn’t have one on his phone.

Jake met with Leila and they discussed their marriage while walking on the beach. Leila told him that she had stopped seeing the man he’d found out about and Jake told her that he’d been seeing a therapist of sorts, who had helped him. When he told her he’d stopped drinking, Leila was pleased.

Tony called Natalie and she didn’t pick up. He left a voicemail and it was Tony begging her to call him back.

Mark went to war with Mary and installed a fence between their properties. Mary tried to pry and told Mark she can always walk around the front to get to their house if she needed to.

Natalie went for a walk on the beach and she called Tony back while Helen tried to speak to Lily, who was still very angry. As Helen tried to make excuses, Lily made it clear that she wasn’t interested in listening.

Tony met Natalie on the beach and she told him that she wasn’t pregnant and never had been. She admitted that she’d come off the pill to try and get pregnant so that Tony would leave his wife but it never happened. Emotional, Natalie told Tony she can’t have an affair with him anymore because it was causing her too much grief.

While Mary began making something out of the clothes she took from Vivien, Jake called Stella to tell her things had gone well with Leila. When he asked if he could go to see her, she turned him down and said she was busy.

Lily returned home and told Helen that she’d spoken to George but didn’t know when he was coming back. Natalie interrupted them in tears asking Helen if she could talk to her.

As it was revealed that Stella had been visited by Mark and Vivien, Jake lied to the police in the present day saying he hardly knew Stella. Stella had called Jake after Mark and Vivien’s visit to inform him that Mark’s late wife died from an overdoes and with Jake’s eye off the ball, his son was almost mowed down by a car.

In therapy Helen and George tried to work through their issues. As George spoke, Helen’s phone rang and then buzzed with text messages from Jake. Helen made her excuses and left the session to call Jake, who told her about Mark’s wife.

Mark packed a suitcase and put a first aid kit in there with a mysterious vial of some kind of drug. Vivien was running along the beach and she stopped to take in some air.

Helen and Natalie chatted about George, and Natalie admitted she had a harmless crush on him. It was revealed that Helen knew about Natalie and Tony, and Natalie broke down to her sister. The doorbell rang and Jake was at the door holding what he called ‘dynamite’.

Vivien invited Mary to join her birthday drinks and told her she was family. Mary agreed to attend and was excited to have been included.

Jake’s documents detailed an inquest into the death of Mark’s wife and it was stated that he would have benefitted financially following her passing. The siblings realised they needed to warn their mother who was at home rebuffing Mark’s attention as doubts crept into her own mind.

Mark prepared a drink for Vivien and it was suggested he’d spiked it with some kind of drug. The siblings got together for the birthday drinks and in the present day the police asked Jake what the mood was like and if he’d tried to help the victim. They also quizzed him about his hand injury, which he lied about as we saw him fighting with Mark.

Flesh and Blood concludes Thursday night at 9pm on ITV.

Advertisement. Scroll to continue reading.
In this article:Flesh and Blood, ITV