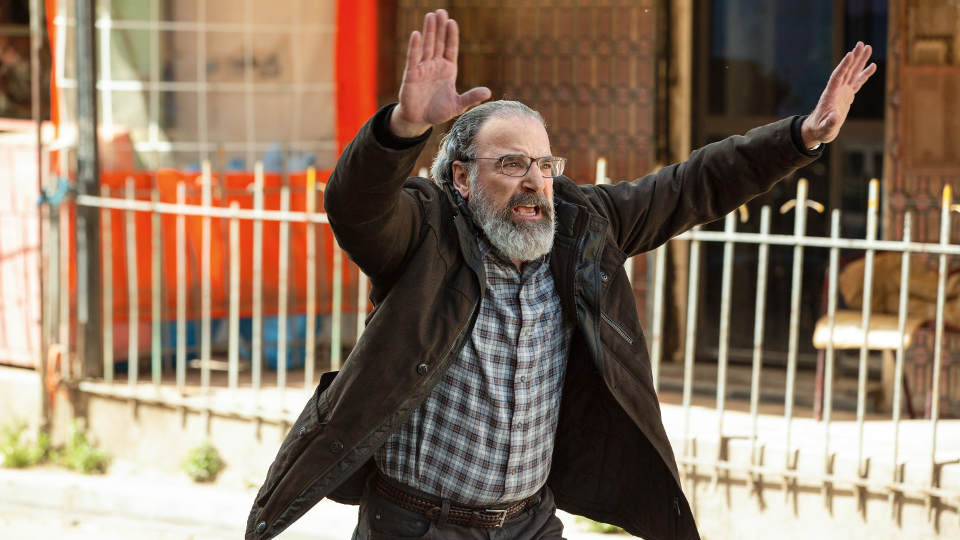 The second episode of Homeland season 8, saw Carrie (Claire Danes) trying to convince Afghan VP G’ulom (Mohammed Bakri) to change his mind about the release of the Taliban prisoners.

The episode opened up right after the end of the first, with Carrie following Yevgeny (Costa Ronin) as he left the building. She was then called in by Jenna Bragg (Andrea Deck) for her meeting with G’ulom.

Straightaway, Carrie confronted G’ulom about the Russians, knowing they were Russian GRU intelligence agents, but he said it was just business. She then got onto her mission of trying to get him to reverse his stance on releasing the Taliban prisoners but he wasn’t for changing his mind. She told him that he had to but he simply replied “Or what?”

Back at the embassy, Carrie called Saul (Mandy Patinkin) to update him on her lack of progress. She was also keen to mention seeing Yevgeny, which seemed to surprise Saul. He actually tried to question if she actually saw him and said she couldn’t go after him. It seems leaving the Russians alone was part of the deal they brokered to get Carrie released.

At her desk, Carrie found an unmarked envelope containing a letter with a name: Samira Noori. She did some research and discovered that Samira was part of a corruption investigation into G’ulom. Samira’s husband had been killed in a car bomb that was likely meant for her. Knowing that Samira could help leverage G’ulom into changing his mind Carrie and the team got to work on bringing her in.

Knowing Samira was out of work but looking for a job they contacted her to offer an interview. The idea was that Jenna would run the interview while Carrie broke into her apartment to search for information they could use. The search looked like a waste of time until Carrie uncovered a USB thumb drive stitched into a burqa. At the interview things didn’t go quite as well though as Jenna messed up causing Samira to become suspicious. She took a photo of Jenna and tried to flee. Jenna managed to get security to stop her and when Carrie arrived back she found they had Samira hooded and tied up.

Carrie attempted to rescue the mission and went to speak with Samira. She had the hood removed, her hands untied and some water brought for her. Carrie apologised and decided honesty would be the best approach. She showed Samira the USB drive and confessed to breaking into her apartment. Carrie told her about the files she found on it and explained how they could use them together to control G’ulom. He’d been scamming the U.S. for millions of dollars for fictional military installations and non-existent troops.

Samira wasn’t happy because she wanted justice for her husband and to see G’ulom arrested. She expressed her wish for the Americans to leave Afghanistan. Carrie explained that peace was actually the only way to weaken G’ulom as he was too powerful. It worked and Samira agreed to help, so Carrie took the files to G’ulom and gave him two hours to make a public statement to walk back his comments on the prisoners.

Pleased at the success of the operation, Carrie and the team went to a local bar to celebrate. Carrie went to the bathroom and on the way bumped into Yevgeny. She started shouting at him but he explained he was the one who tipped her off about Samira. He seemed surprised at Carrie’s reaction to him and walked off. Carrie had another flashback to her time in the prison where she was begging him not to leave her.

Meanwhile, Max (Maury Sterling) picked up some chatter using the device he installed last episode. He had audio of Taliban Leader Haissam Haqqani (Numan Acar) expressing an interest in peace. This gave Saul an idea, one of the five Guantanamo prisoners that were being released was second cousin to Haqqani. Saul convinced him to take a letter to Haqqani that invited him to a meeting.

While Saul waited to see if Haqqani would show, Max picked up more chatter. It indicated that Pakistani intelligence knew he was there.

Elsewhere in the episode, Tasneem (Nimrat Kaur) went to Pakistan to talk to Bunny Latif (Art Malik). She explained that Saul was in Pakistan and he gave permission for her to go as far as possible to stop Saul meeting with Haqqani.

At the end of the episode, Haqqani’s convoy approached Saul’s compound. Saul went outside and realised something was wrong. He realised the convoy was going to be hit and tried to warn them. Suddenly a rocket was fired from a nearby rooftop which hit the convoy.

Saul was knocked to the ground but taken inside to safety. Soon after he was grabbed from behind and taken out a different exit where he was loaded into a truck. He arrived at a compound where he was pushed to his knees. Haqqani appeared and Saul was relieved to see he was still alive. Haqqani approached Saul and knocked him out with his rifle.

Can’t wait for the next episode? Read our Homeland series 8 episode 3 preview.