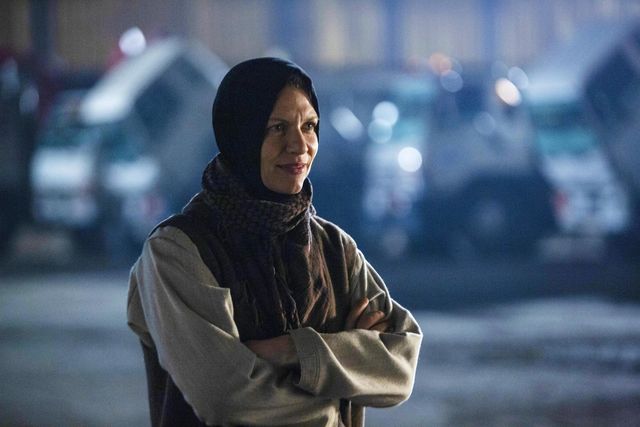 The season 8 premiere of Homeland, caught us up with Carrie Mathison (Claire Danes) and Saul Berenson (Mandy Patinkin) then set events in motion for this final season.

Following the prisoner exchange at the end of season 7, the episode opened up with Carrie recuperating in a German hospital. After her 7-month ordeal she was struggling to sleep and suffering flashbacks and anxiety attacks.

Carrie was focused on getting better and shown to be in great physical shape as she ran lengths of a basketball court. Mentally she’s struggling with PTSD but still trying to ween herself off some of her meds. Carrie was called into an interview with Jim Turrow (David Hunt) who pushed her about her time in the Russian gulag. Carrie explained that her meds were withheld and she can’t fully account for around 180 days.

Carrie still had ambition to return to the CIA but Turrow informed her that she had failed her polygraph. She swore she told the truth to the best of her ability but he said it indicated that she was telling lies. She admitted giving up the location of an old safehouse in Beirut but said she didn’t give up any assets. Turrow pondered how could she be so certain if she had so much missing time.

Meanwhile, in Qatar, Saul was at the Marsa Malaz hotel where he was trying to broker a peace deal between the Taliban and the Afgham government. He updated members of the press “off the record” but was interrupted but a TV broadcast. The Afghan VP, Abdul Qadir G’ulom (Mohammad Bakri), said that they had been tricked into releasing over 1,000 prisoners of war. He announced that he would never release any more which caused the Taliban delegation to leave.

Saul raced after them and tried to get things back on track. They refused to engage if there was no chance of prisoner release. Saul proposed trying to release five prisoners from Guantanamo Bay. They agreed that would be acceptable if they could specify which prisoners were released. Saul confronted Tasneem Qureshi (Nimrat Kaur) to blame Pakistan and referenced the previous attack on the US embassy.

As usual Saul needs help to fix things and that means he needs Carrie. He paid a visit to the hospital to talk to her medical team and told them he wanted her in Kabul for a week or two immediately. Turrow suggested that Carrie may be compromised but Saul stood up for her and dismissed the failed polygraph. Saul told Carrie of the mission and how dangerous it was but she jumped at the offer. Turrow called ahead to the station chief Mike Dunne (Cliff Chamberlain) to warn him that Carrie was coming.

Soon after Carrie arrived in Kabul she met with Mike and he introduced her to new team member Jenna Bragg (Andrea Deck). She showed Carrie to her room and it was revealed to us that Mike was spying on her communications. Under the cover of darkness Carrie donned a hijab and snuck out on a motorbike to meet an old asset. She met up with another old friend who transported her to the meeting. However there she met her contact’s wife and young son and discovered her contact had been killed. Carrie promised that she didn’t give him up but obviously can’t be 100% sure due to her missing time.

After a close call, Carrie managed to get back to the station. There she was confronted by an annoyed Mike who had three teams out searching for her. He also informs her that her meeting with the Afghan VP has been moved forward to the following morning. Carrie asked a question about the Russian’s working with the Taliban which left Mike suspicious.

Elsewhere in the episode, Max (Maury Sterling) was on a mission of his own in Afghanistan. He was brought in to fix a listening device that the US was using to spy on the Taliban. He was assigned to a squad for the nighttime mission where they called him a ‘cable repair guy’. As dawn began to break the squad became frustrated and wanted to head back but Max won their respect when he said he’d stay on his own to get the job done. In the end they stayed with him until it was fixed.

At the end of the episode, Carrie arrived for her meeting with the Afghan VP. As she was shown to his office the door opened and Yevgeny Gromov (Costa Ronin), the Russian who led her torture, walked out. She suffered more flashbacks and was left visibly shaken.

Can’t wait for the next episode? Read our Homeland series 8 episode 2 preview.