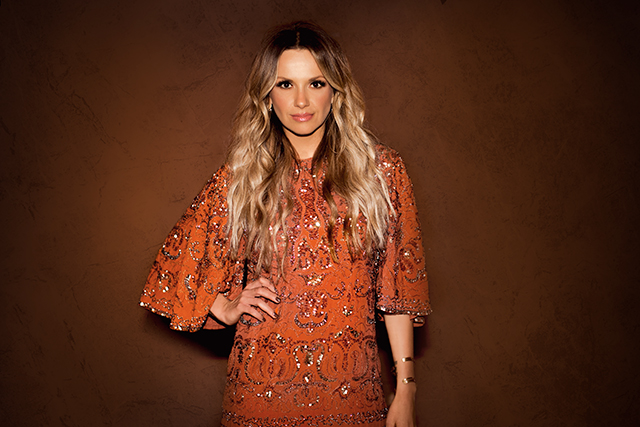 Carly Pearce had a breakout year in 2017 when her debut single Every Little Thing topped the US Country Airplay chart. Her debut album of the same name followed and it entered the US Country Albums chart at number 4, spawning a second hit Hide the Wine. It was my pick for album of the year in 2017 and to be honest I’ve been a little nervous to find out how Carly could follow-up such a strong, and flawless, debut. She teased a few things about the record when I caught up with her before C2C: Country to Country last year and since then we’ve had two singles – the sweeping Closer To You and the powerful I Hope You’re Happy Now with Lee Brice.

Carly Pearce, the long-awaited second album, finally arrives this week and not only has Carly given us a worthy successor to Every Little Thing, she’s made an album that’s even better. Produced by the late busbee, whom Pearce collaborated with on her debut, Carly Pearce embraces the tradition of Country and places it within the context of the modern Country scene. There’s no attempt to move out of the Country genre here by incorporating hip-hop, pop or dance like many of her contemporaries. Instead Carly keeps it classy with melodies and hooks for days, allowing her gorgeous and distinctive voice to tell 13 stories that need listening to.

Closer To You opens the record and it’s one of the breeziest songs here for sure. It leads into the playful Call Me, which was co-written by Little Big Town’s Phillip Sweet and Jimi Westbrook, a song that is underpinned by a funky groove and some clever vocal work from Carly. I Hope You’re Happy Now follows and within the context of the full record, it packs an even greater punch. It’s one of the best Country songs to be released in years and the way Carly and Lee play off one another is pretty magic.

The soaring Dashboard Jesus is a proper Country storytelling song that touches on religion, growing up and finding your identity. It’s a nice throwback to 90s country with instrumentation geared towards Carly being able to play it live and wow the audience. The album’s standout moment comes next on the stunning Halfway Home as Carly comes clean to a lover that she’s not all-in when it comes to their relationship. Lyrically it’s heartbreakingly and vocally Carly reaches heights we’ve not heard before. The emotion packed into the song is breath-taking and I’m sure this is going to be a signature track for her in years to come.

Continuing like it started, Carly Pearce is packed with variety. Every one of these songs deserves its time to shine from the punchy love-drunk Heart’s Going Out Of Its Mind through to the gorgeous closer Greener Grass, which has some similarities sonically to Every Little Thing. Carly teams up with her husband Michael Ray on the loved-up and mature Finish Your Sentences, sings over a lazy groove on the swoonsome Lighting in a Bottle, and deals a rallying cry on the storming Woman Down. On the piano ballad It Won’t Always Be Like This, Carly reminds us to enjoy the moment before things change as she recalls wanting to get out of her hometown when she was younger, only to find she can’t stay away as she’s growing older. Love Has No Heart is another highlight and heartbreak never sounded as gorgeous as it does coming from Carly. Her voice has the ability to bring all the pain and emotion out of every lyric, in a way that makes her so unique in today’s Country music scene.

Carly Pearce really has delivered beyond expectation with her second album. I can’t remember the last time I played a full album on loop for hours and this one gets better with every listen. It’ll delight modern and traditional Country music fans, it shows fantastic growth from Every Little Thing for Carly and it’s utterly addictive. I’ve lost myself in this record for hours since it landed in my inbox and I’m already looking forward to my next listen. I’m also incredibly excited for her fans to hear the album for the first time on Friday.

Track list: 1. Closer To You 2. Call Me 3. I Hope You’re Happy Now (with Lee Brice) 4. Dashboard Jesus 5. Halfway Home 6. Heart’s Going Out Of Its Mind 7. Finish Your Sentences (with Michael Ray) 8. It Won’t Always Be Like This 8. Lightning in a Bottle 9. Love Has No Heart 11. Woman Down 12. You Kissed Me First 13. Greener Grass Record label: Big Machine Records Release date: 14th February 2020 Buy Carly Pearce