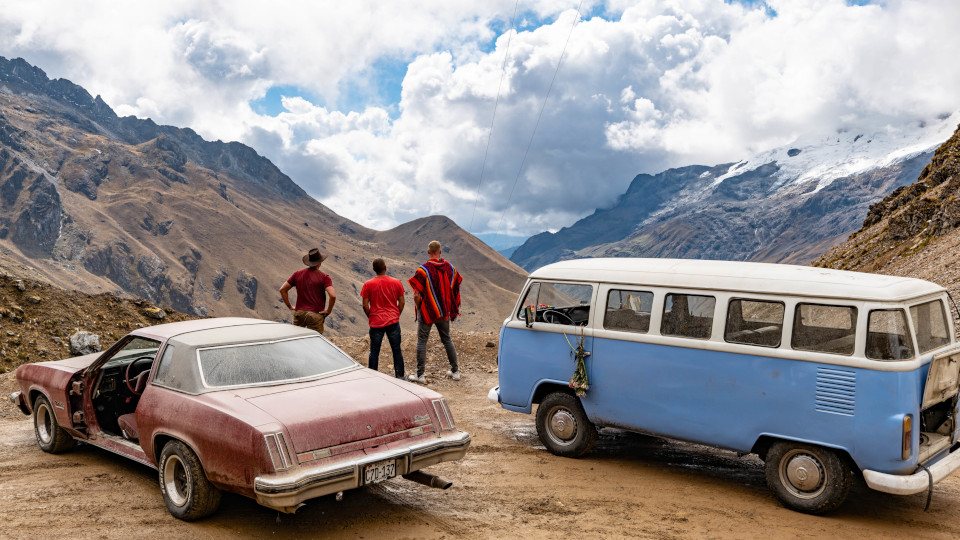 In this week’s episode of Top Gear hosts Freddie Flintoff, Paddy McGuiness and Chris Harris embark on an all American road trip with a difference. We also see Chris put the all-new, all-electric Porche Taycan through its paces on the Top Gear track.

The boys have been given a budget of £5000 to buy their cars for the American road trip but they are asked to meet up in Peru rather than somewhere in the USA. The reason being is that Peru has some of the most ancient roads in the Americas and is in fact the perfect place to embark on an ‘original’ American road trip.

Chris has chosen a Dodge Dart, Freddie picks a VW Camper and Paddy turns up in a customised Pontiac Firebird (it has no roof whatsoever amongst other things). The boys then set off on the trip which will take them from the Peruvian capital Cusco all the way to the top of the Vilcabamba mountains.

Within only a few miles the no roof option backfires on Paddy as it starts to rain, shortly after that he breaks down, things are not going well for the man and they soon get even worse.

The trio come across a perfectly straight 1/4 mile piece of road which inevitably leads to a drag race. The VW comes a distant second to the Dart and next comes the turn of the Firebird. Things go very wrong here for Paddy, after only a few yards the back end of his axel comes apart entirely forcing him to abandon his car.

All is not lost though as in the next town there happens to be a gathering of classic American car enthusiast and Paddy manages to buy himself a new ride, a bright red Oldsmobile.

Along the way, the boys are invited to take part in local motorsport motorcar cross and indulge in some local cuisine which doesn’t go down well with Harris and McGuiness.  After travelling through some of the most stunning scenery ever they begin their final ascent into the Vilcabamba mountains.

The climb is gruelling and the altitude sucks almost all of the power from the vehicles to the point where Chris has to abandon his Dart. Very slowly the cars edge their way up to the summit with both the VW and Paddy’s new Oldsmobile making it to the top.

On the track, Chris is test driving the new Porche Tayan. This new all-electric car pushes the boundaries of electric motoring in all the areas that matter, performance, handling, comfort and recharge time. The Porche delivers blistering performance and can accumulate enough charge for 200 miles range in just 20 minutes. There is a price tag of around £140,000 though so it’s not the cheapest electric car around.

All in all another great show and the Peru films, in particular, had me smiling from start to finish.

View some more images from the episode in our gallery below: