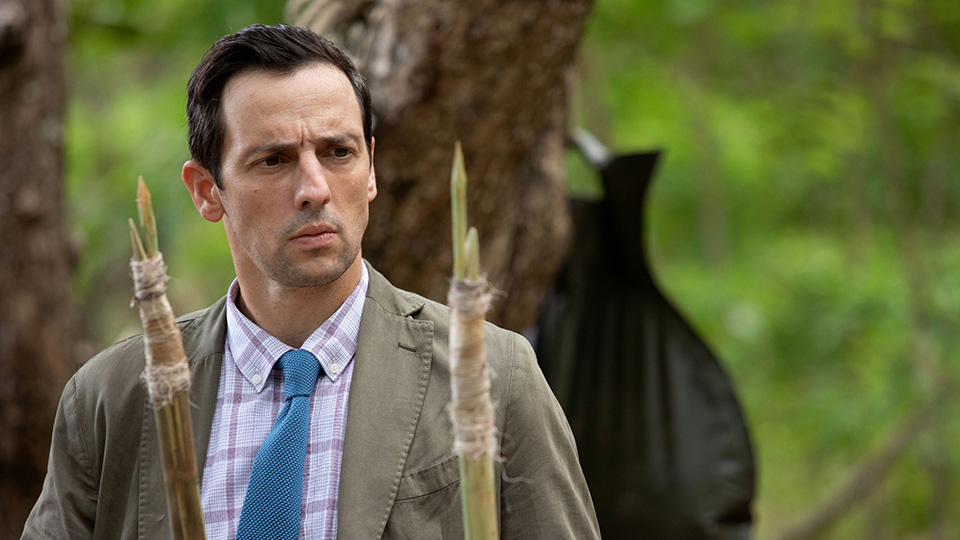 Series 9 of Death in Paradise continues next week.

If you don’t want spoilers for Death in Paradise, stop reading now.

In episode 5 celebrations at the launch of the new luxury Henderson resort in Saint Marie were cut short when British developer Neil Henderson’s (Steve Pemberton) daughter, Tamsin Lewis (Chanel Creswell), was found electrocuted in her hotel bathtub with the door locked from the inside.

As all evidence pointed towards suicide and Commissioner Selwyn Patterson (Don Warrington) concluded thats to be the case. The team wasn’t convinced though so they called in D.I Neville Parker (Ralf Little) from Manchester. He discovered an empty mouth guard case and packet of sleeping pills results so he extended his stay to investigate it as a murder.

Tamsin’s family were the prime suspects and the investigation pulled them apart while they tried to prove foul play.

A desert island survival course goes wrong when the leader Will Arnott (Daniel Caltagirone) – a trained survival expert and ex-SAS soldier – is found dead in the forest of a remote island near Saint Marie.

Having ventured off into the wilderness alone and with no other people on the island apart from the trip participants – Casey Booth (Chloe Harris), Dave Hammond (Robert Londsdale), Bethan Miller (Alexandra Roach) and Malcolm Simmons (Sam Troughton) – suspicion soon falls upon them.

But with all of the course members providing one another with an alibi, how could any of them have committed the murder?

With D.I. Neville Parker (Ralf Little) still unable to fly back to Manchester, his help is requested to solve this mysterious murder. Neville and the Commissioner (Don Warrington) follow a lead which takes them back to the remote island. However with a storm on the horizon, will they be caught upstream without a paddle?

Death in Paradise continues at 9pm Thursday on BBC One. Preview the episode with our gallery below: