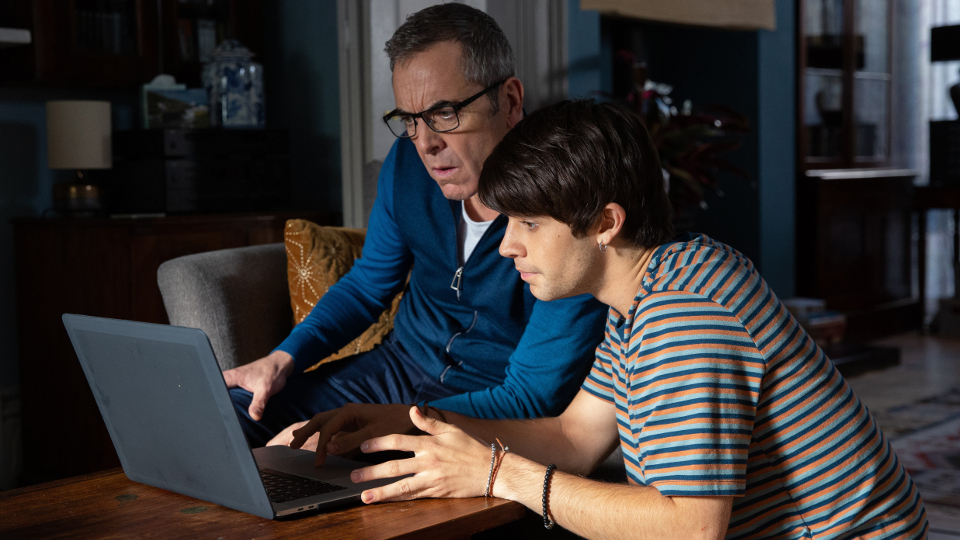 On the latest episode of Cold Feet, David (Robert Bathurst) made the most of his new opportunity.

It turned out that it was Jenny’s (Fay Ripley) mum Barbara (Marji Campi) who had the stroke, not Karen’s (Hermione Norris) mum Heather (Gemma Jones). Unfortunately, Barbara suffered a second episode while in hospital and she passed away. Jenny called her sister Sheila (Sally Rogers) but she didn’t make it to the hospital in time.

Adam (James Nesbitt) was signed off work due to his sprained ankle. However, his bosses were suspicious and had him followed. They concluded that he was fit for work and handed him his termination notice for telling lies.

David settled into his new job and was an instant hit when he gave an interview and ended up on the cover of a magazine. He later had a run in with his old cell mate and suggested his new company employ him as his assistant.

Sheila tried to take control of the funeral plans and had a falling out with Jenny. Pete (John Thomson) didn’t know how to tell Jenny that he’d spent the money they needed for the funeral on topping up his sponsorship to beat Adam and David. A chance encounter with fellow jury member Sandra (Clair Keelan) led to her loaning Pete the money. He later offered to setup her new TV for her to help repay the favour and she propositioned him with a no-strings affair.

At the funeral, Sheila broke down so Jenny comforted her and said a few words. At the wake they made up again.

Elsewhere in the episode, Laura (Sacha Parkinson) arrived on the scene again and apologised for leaving the meal. She revealed that Matt (Ceallach Spellman) wanted to meet her. When they met up, Matt wanted to know about his mother and Laura made some things up. Adam later thanked her but she said she didn’t want him in her life any longer.

Coming up in the fifth episode. Adam comes out on top, but his excitement is short-lived when reality hits. Karen is put in an impossible position. In the wake of her mother’s death Jenny makes a discovery that sends her into a tailspin.

Cold Feet series 9 episodes air at 9pm Mondays on ITV. Preview the next episode with our gallery below: