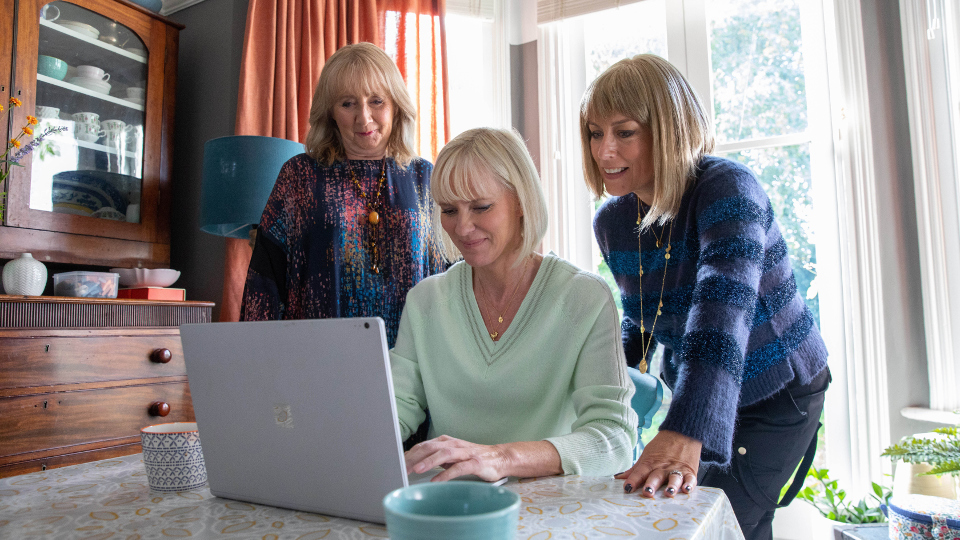 The episode opened up where the previous one left off with David (Robert Bathurst) driving Karen (Hermione Norris), Jenny and Pete (John Thomson) to the hospital after the news that Karen’s mother, Heather (Gemma Jones) had suffered a stroke. However when they got there they discovered that Heather was fine, it was Jenny’s mother Barbara (Marji Campi) who had taken ill.

It was obviously a relief for Karen but devastating for Jenny. Barbara had suffered a brain bleed but was conscious and speaking. Jenny wanted to call Barbara’s sister but she asked her not to. The nurse explained that there was a risk of a second bleed and that the first 48 hours were critical. Karen took Adam (James Nesbitt) back home with his sprained ankle.

Meanwhile, David started his new job and was met by his boss Deborah (Sunetra Sarker) who was glad that he had accepted. She showed him his office and he was excited to get started. He gave an interview and was placed on the cover of a magazine. Deborah and the board were delighted. He later had a run in with his old cellmate who broke into the cafe. David had an idea and proposed to work that they give his friend a job and had an idea how they could spin it for good press.

Adam popped into work to hand in a sick note after being signed off with his ankle. His bosses weren’t overly impressed and were a little suspicious when he took a call from David arranging to meet for lunch and then a call from Laura (Sacha Parkinson).

At home, Karen decided to have a talk with her mum. She explained how upset she was when she thought her mum was the one who had a stroke. She decided to make more of an effort with Heather in future.

Adam met with Laura as she asked and she apologised for running off at the evening meal. She asked why Matt (Ceallach Spellman) had requested to meet up with her. Adam knew nothing about it and Laura explained that she was meeting him after work.

Jenny went to the hospital to visit her mum and while she was with her she suffered another attack. After the staff got Barbara stable, Jenny brought the kids in to see her and had Pete bring in Sheila (Sally Rogers). With her mum in a bad way, Jenny let Sheila talk to her down the phone while on the way. When Sheila arrived at the hospital, she was met by an upset Jenny who told her that Barbara had passed away. Sheila went in to see her and Pete told Jenny he was sorry.

Jenny called Karen and told her the sad news about Barbara’s passing. Sheila went back home with Jenny and the next morning she had already planned out their mum’s funeral. The was a problem though because Sheila hadn’t spent much time with her mum for years and Jenny didn’t agree with her plans. Sheila had gone for a very religious ceremony while Jenny wanted to agree everything together.

Later, Jenny took some advice from Karen and let Sheila go ahead with her plans. Sheila had some quotes and suggested they went halves. Jenny requested that she was allowed to help carry Barbara’s coffin and Sheila flipped. She started ranting that Jenny had stopped her seeing her mum at the hospital until it was too late. The pair started a blazing row and Jenny ordered her to leave.

Adam took Matt to the gym and was amazed at the progress he was making. He also quizzed him about his night out, knowing that he’d gone out with Laura. However, Matt kept things to himself and didn’t explain who he was with.

Pete went to the bank and when he came out he bumped into Sandra (Clair Keelan), the woman he got on well with at jury service. She suggested going for a coffee to talk and he agreed. He revealed that he didn’t have the money to pay towards the funeral because he had sponsored himself to beat Adam and David. Sandra gave him the money and said it was just a loan to help him out.

At home, Karen was tidying up and emptied Matt’s gym bag. Inside she found a needle with what appeared to be heroin. She showed it to Adam and they wondered where he got it and what to do. Adam decided it must have come from Laura. Matt arrived home and they asked him about the heroin but Matt laughed it off and said it wasn’t heroin, or from Laura, but steroids to help him at the gym. He’d wanted to impress Olivia (Daisy Edgar-Jones) by bulking up and he had met Laura to ask about his mother.

At Barbara’s funeral, Adam stepped in for young Adam (Jack Harper) to help carry the coffin. Sheila broke down during her speech and Jenny stepped up to help her and said a few words. They left hand in hand. Heather didn’t attend the funeral as she went back to Spain leaving Karen disappointed. Hearing what a good mother Barbara had been brought Karen to tears and she had a flashback of her mother telling her off for interrupting her grown-up time.

At the wake, Matt asked if Adam would take him to Port Merrion where Rachel’s ashes were scattered. Jenny and Sheila made up at the wake and Olivia apologised to Karen for not being considerate and moving to Robyn’s (Lucy Robinson). With Heather having left, Olivia asked if she could come home.

Pete took a call and it was Sandra checking he was ok. He told Jenny it was work calling and went to another room. He thanked Sandra again for the loan and said to ask if there was anything he could do for her. She mentioned she’d bought a new Smart TV and needed help setting it up and Pete said he would.

Adam met up with Laura and went for a walk in the park. He thanked her for telling Matt about Rachel and she said she made it all up. She said she wouldn’t be coming round again and didn’t want him in her life. Adam was upset but wondered if she was testing him to see if he’d fight for her. Karen told him that not everyone needed rescuing.

Pete popped round to Sandra’s and sorted out the TV for her. She offered him a cup of tea but he said he had to get off. She explained that she could have sorted the TV out herself and appeared to be offering him some kind of no-strings affair.

At the end of the episode, Adam was called into work and they revealed they had spied on him. They had photographs of him socialising, at the gym and carrying Barbara’s coffin when he was supposed to be off work sick. They handed him a termination notice.

Can’t wait for the next episode? Read our Cold Feet series 9 episode 5 preview.