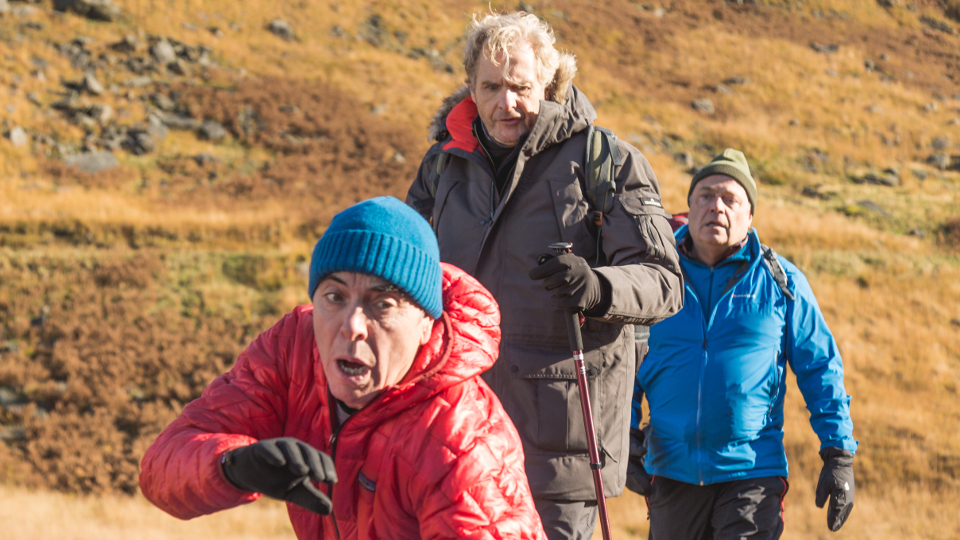 On the latest episode of Cold Feet, Adam (James Nesbitt) reached out to Laura (Sacha Parkinson).

The episode opened up with David (Robert Bathurst) practising his motivational speech in the bathroom. He later gave his speech and it was a hit. Afterwards, Deborah (Sunetra Sarker) offered him a job to come and work as Director of Social Responsibility.

Karen (Hermione Norris) booked an 80s weekend for her and Jenny (Fay Ripley). She wasn’t sure though why Jenny had wanted her to book a room each until Jenny revealed that she had accidentally invited her mother Barbara (Marji Campi). Karen wasn’t too happy and couldn’t understand how she’d invited her accidentally. A moment later, Karen’s mum Heather (Gemma Jones) came in and kind of invited herself after hearing Barbara was going.

Meanwhile, Adam was using the Internet to see what he could find out about Laura. Matt (Ceallach Spellman) accused him of stalking her but then agreed to help in exchange for a gym membership.
Using the information they found, Adam decided to turn up outside Laura’s work. She said she didn’t remember him and was a bit spooked so asked him to leave her alone.

Last episode Pete (John Thomson) announced a plan to get the Three Amigos back on friendly terms by conquering a walk up Scafell Pike for charity. Even before they went he discovered that David and Adam were trying to outdo each other by getting the most donations. David appeared to be storming ahead, closely followed by Adam with Pete way back in third place.

David went for dinner at Robyn’s (Lucy Robinson) and Karen arrived to pick up Olivia (Daisy Edgar-Jones). She announced that she wasn’t coming home if she had to share a room and anyway it was better to stay there as she was doing work experience with Robyn.

Before going away on their trip, the girls took their mums to pick out costumes. They needed to dress as 80s icons and spent ages having fun trying on the various costumes. In the end, Karen and Jenny decided to dress as Thelma and Louise instead.

At Adam’s office the IT department were having a photo shoot and his boss thought he looked out of place being older than the rest. A phone call came in and it was Laura who was outside to meet him after having tracked him down online. He took her out for a coffee and the pair talked. It turned out that she did remember Adam and Rachel as well as their house and days out. It was a happy time until they didn’t adopt her and she was never told why.

Laura thought they had rejected her but Adam explained that they weren’t allowed to after Rachel fell pregnant. Laura asked if he was still with Rachel which left Adam to break the heartbreaking news of her death which was caused by a car crash. Adam also explained that Rachel left him with Matt and invited Laura round for a meal that evening. Karen was a little surprised and Matt was rather angry.

The meal didn’t go great with Matt being very standoffish and Ellie (Sylvie Briggs) complaining at the small portion size. Ellie popped to the bathroom and spotted a picture of Rachel. Matt came after her and apologised. Laura let slip that she wasn’t adopted because Rachel fell pregnant with Matt. Laura left and Matt raged at Adam for not telling him the truth.

While stopping for petrol, Karen revealed to Jenny that Adam wasn’t talking to her because she accused Laura of stealing one of her necklaces. Speaking of stealing, Jenny was taking the characters of Thelma and Louise a bit too far and nicked a packet of sweets. They sped off but had to go back to the garage after they forgot Barbara.

Before heading off on their charity walk, David gloated at beating Adam’s sponsorship total. It turned out that Pete actually raised the most so David said he was still chuffed to beat Adam to second place. The walk was a bit chaotic because they couldn’t agree on which way to tackle the climb. Adam and David had different ideas but they had to follow Adam when he shot off ahead.

Annoyed, David had a vision of knocking Adam off the mountain. Straight after, Adam lost his footing and actually fell a fair way, twisting his ankle. He was unable to walk so they needed to get him some help. They had no mobile signal so David was left with Adam while Pete went off to raise the alarm.

As it fell dark, David and Adam began to talk. They each apologised and Adam explained he was sorry for hurting David but that he was serious about Karen. They sorted their differences out and started to get worried when Pete didn’t return.

Meanwhile, Jenny and Barbara were enjoying their 80s weekend but Karen and Heather had several falling outs. While they were talking Karen spotted the missing necklace around her mother’s neck. She called Adam to apologise and the call went through and David answered. He gave her a quick message about what had happened and asked her to call 999 before the call disconnected. They didn’t know if Karen had heard all the information but celebrated when Mountain Rescue arrived on the scene.

Karen and Jenny went to the hospital to see Adam before realising that Pete was still missing. A nurse informed them that Mountain Rescue had brought another person in so Jenny went to check. It was good news, it was Pete and he was ok.

At the end of the episode, Karen took answered her phone and was informed that her mother had suffered a stroke.

Can’t wait for the next episode? Read our Cold Feet series 9 episode 4 preview.