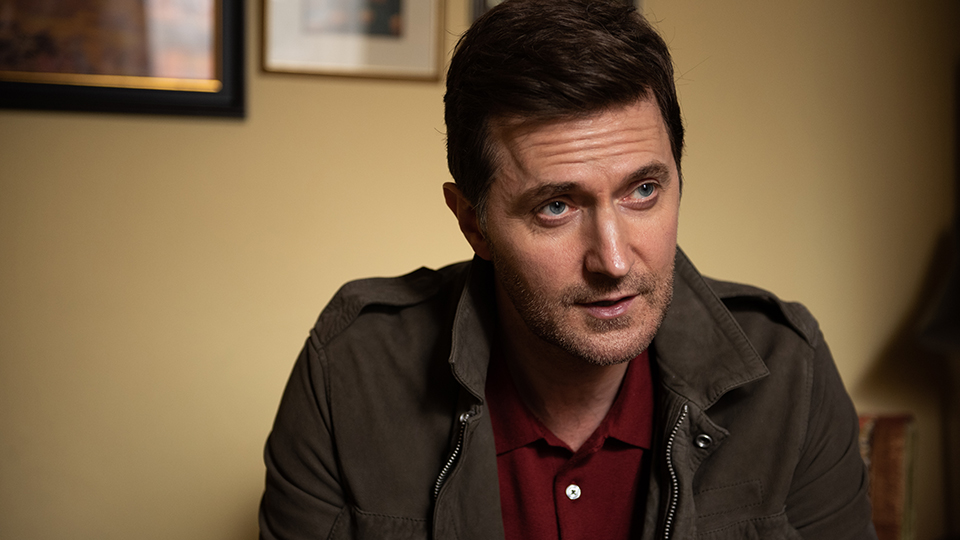 Nothing is as it seems in Harlan Coben’s latest Netflix drama The Stranger, which is released on the streaming service today.

This article contains spoilers from the first three episodes of The Stranger. Stop reading now if you don’t want to know what happens.

Ahead of the full series premiering, we’ve watched the first three episodes to see what it’s all about. The Stranger tells the story of Adam Price (Richard Armitage), a family man whose life comes crashing down following an encounter with a strange woman (Hannah John-Kamen).

Seemingly living a happy life with his teacher wife Corinne (Dervla Kerwin) and their two kids Thomas (Jacob Dudman) and Ryan (Misha Handley), Adam’s world is thrown into chaos when he’s approached by the woman and told that his wife had faked her pregnancy and subsequent miscarriage. Demanding to know how she knew this information, Adam is left further reeling when the stranger tells him to check the paternity of his children.

At first Adam doesn’t believe what he’s been told but as he digs deeper into Corinne’s activities, he discovers that the stranger could be telling him the truth after all. He confronts Corinne, who eventually tells him there’s more to the story than he knows and gives him the name of a woman she knew that had faked a pregnancy.

After that Corinne disappears leaving Adam hunting for clues in a bid to try and find out what on earth is going on.

Perhaps the most surprising thing about the first three episodes of The Stranger is that the story isn’t solely focused on Adam. While that plot is a driving narrative, there are plenty of sub-plots going on around it. The stranger isn’t only messing with his life but it turns out she knows lots of things about lots of his friends and neighbours too including café owner Heidi (Jennifer Saunders) whose daughter is making money in way that she wouldn’t want the world to know.

While the stranger goes around causing mayhem, a mystery unfolds involving teenager Dante (Kai Alexander) who is found naked and unconscious in the woods by police officer Johanna Griffin (Siobhan Finneran) and her partner DC Wesley Ross (Kadiff Kirwan). That discovery comes after a decapitated alpaca is found in the town and a link between the two events is quickly established.

Three episodes in and there’s A LOT going on, possibly too much to be honest. The central mystery involving Adam and Corinne is by far the most compelling part of the story so it’s a little frustrating that so much time is spent on the kids from the various families and their part in what happened to Dante.

Richard Armitage is as reliable as ever though and he makes a strong lead for the series. The makers have found plenty of reasons to have him wandering around without his shirt on and in black underwear (not that we’re complaining) but he does a good job of embodying a man who realises he may not know all that much about the woman he’s been sharing his life with for a number of years.

Another person of note in the cast is Jennifer Saunders who is playing it straight as Heidi and she’s actually very good. Without getting into too many spoilers, we’d suggest perhaps not getting too attached to her but it’s refreshing to see her step outside of her comfort zone.

By the end of episode three, The Stranger could go in a bunch of different directions. The secrets are piling up and the mystery is looking pretty complex so how that’s going to look by the end of the final episode is anyone’s guess. The show does enough to hook you in and at only 8 episodes long, it’s not a huge commitment.

Our fear right now is that it’s going to continue to get overly complicated rather than paying time and attention to the storyline that people find the most interesting – Adam and Corinne.

The Stranger is available on Netflix now.

Advertisement. Scroll to continue reading.
In this article:Netflix, Richard Armitage, The Stranger