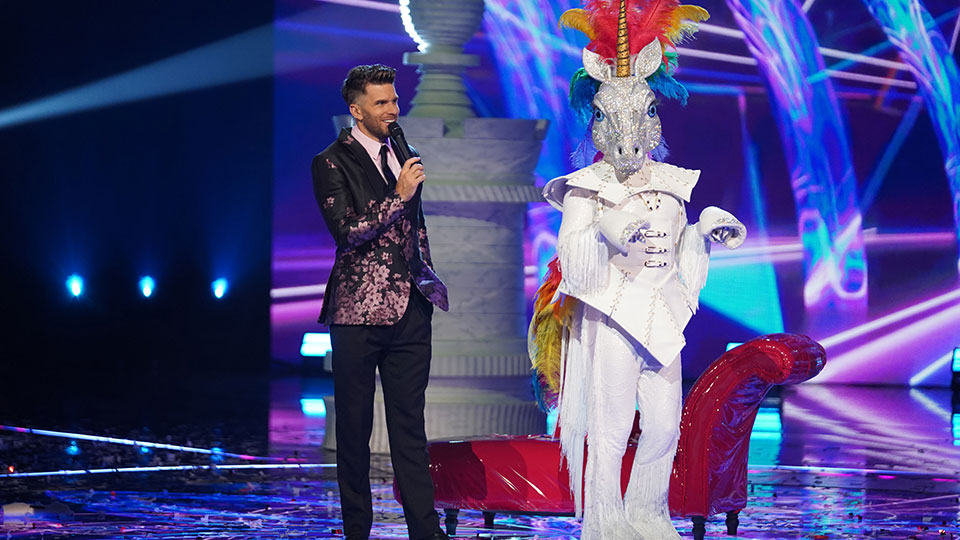 The Masked Singer continued last night, which meant we’ve had another game of guessing who is the under the masks.

This week’s episode solidified many of our guesses but it also threw us on a couple of of the celebs. The clues are coming so thick and fast, and in some instances they seem to be contradicting what we thought we knew.

Donny Osmond joined the panel this week to replace Ken Jeong, but he didn’t add a whole lot of great guesses. Davina McCall and Rita Ora were much closer we think and given Jonathan Ross guessed Natalie Cole, who died in 2015, we’re just going to ignore him.

The clues: Monster said he used to be a giant and that he comes from a big family. He was encouraged by a relative who hear him singing in the shower. Monster says he has a big family and grandkids.

Previous clues: Always trying to be a bit of a showman who lives in the spotlight. Loved books as a child but can also be a real little monster. Discovered his love for rock and roll while growing up and plays the bass. Inspired by glam rock and likes doing his own thing. Previous clues included that Monster was a big personality with big muscles that has come to the UK. He said he doesn’t want to blow his own trumpet but he’s won many awards. After his performance he revealed that his hero is Spandau Ballet’s Tony Hadley.

Our guess: CeeLo Green. We’re not sure about the big family and grandkids bit but CeeLo did write and produce the Pussycat Dolls song Don’t Cha, which he performed on the show last night. We’re not budging on this one.

The clues: Fox says that clothes have played a big part in her life, she likes being glam and dancing with her girl friends. She said a broken heel led to her big break and she revealed that she’s crafty.

Previous clues: Fox was seen tap dancing and made a few references to dancing. She’s always followed her own path and has broken records. There was a US flag shown during the VT and Fox said she was going to blow everyone away. Previous clues include street smart and nosy, can be a bit of a party animal and can be seen slinking around the East End from time-to-time. The additional clue was Fox has been collecting tea pots for 30 years.

Our guess: Denise Van Outen. We’re not budging on this one either. If this isn’t Denise Van Outen, we’ll eat our hats. All of the clues point to Denise and even Davina guessed it might be her this week.

The clues: Queen Bee has always loved using her voice but is naturally shy. She won a contest, which launched her career when she was young, and she felt swept away by the tide and thrown in at the deep end. Queen Bee has been centre stage at some big venues.

Previous clues: Queen Bee gets a buzz from looking after other people and using her voice for good. She’s thought of as shy but always stands up for what she believes in and has made a difference. Queen Bee is a law maker and considers herself benevolent. She was also seen beating a drum. Last week she said she started her career young and was a bit of a wildcard.

Our guess: Nicola Roberts. We’ve been convinced that Queen Bee is Girls Aloud star Nicola Roberts since the very first week. The clues further support that, especially the part about a contest launching her career. Rita guessed it was Nicola too and Girl on Fire surely is a nod to Nicola’s hair colour?

The clues: Octopus suggested that she’s a tourist in London and spends time on beaches. She’s not always in her natural habitat but she has her wellies for the beach, in the Dales and the city. Has been known to visit dangerous locations, such as a jungle, and takes ‘serious fishnets’ to do what she’s done.

Previous clues: Octopus suggested she was a singer and that she’d signed a £1,000,000 record deal. There was a photo of Jason Donovan visible in her bag and she suggested she may have been on The Apprentice. She also referenced things going ‘swimmingly’. The previous clues were that she was bubbly, happy-go-lucky and always on the go. She would like to be a role model and could possibly be a model. She always likes weight training.

Our guess: Myleene Klass. We’re completely and utterly thrown by this one but talking to the team, Myleene might fit. She was in I’m a Celebrity with Jason Donovan and has performed with Jason on TV. After Hear’Say she’s straddled the worlds of pop and classical too.

The clues: Unicorn says that performing is a passion but he also loves to write. He loves fantasy and horror. Unicorn has written words for other people including Sarah Jessica Parker.

Previous clues: Unicorn claimed not to know who John Barrowman was but said ‘fabulous’ which is Barrowman’s catchphrase. He said he grew up on a small island but was drawn to the bright lights. That adds to last week’s clues that he was LGBTQ, a show pony and that he flew on a private jet for family holidays.

Our guess: Jake Shears. We’ve moved from John Barrowman after a reader gave us a theory that makes a lot of sense. The Sarah Jessica Parker clue could refer to when SJP covered Let’s Have a Kiki, a Scissor Sisters song, on Glee. Jake has also written an autobiography and songs for Kylie Minogue.

The clues: Hedgehog never imagined that he’d be a performer. He’s played to a variety of people over the years and always looked up to people like Billy Connolly. Hedgehog sings 8 shows a week and can’t believe the places where his career has taken him.

Previous clues: Hedgehog enjoys being part of a team and likes being part of an ensemble. A can of hairspray and models of cats were seen along with a Phantom of the Opera mask. He mentioned having a ‘ball’ and bringing the house down. Last week he said he was most active at night and his natural habitat is on stage. He also said he’s a workaholic and he used to die at 8.30pm ever night.

Our guess: Michael Ball. We’re not as convinced on this one as we were but the clues do still seem to fit. The voice wasn’t a great fit for Oasis’ Don’t Look Back in Anger though and didn’t sound as strong as previous weeks.

The clues: Duck likes to be liberal with her talents and she’s used her voice to help others. She believes everything is political and credits Judi Dench with getting her into Shakespeare.

Previous clues: Duck speaks German and Italian, and was seen having a pizza delivered to her. 850,000 once sang Happy Birthday to her and she sang Happy Birthday to someone important once. Last week she said she used to be a long-distance runner but hinted she wasn’t a singer by trade so we think we may have got that clue wrong. She always likes surfing.

Our guess: Skin from Skunk Anansie. If nothing else, her voice is so recognisable, it can’t possibly be anyone else. We didn’t know she could do operatic singing but that husky tone is without a doubt her.

In this article:ITV, The Masked Singer