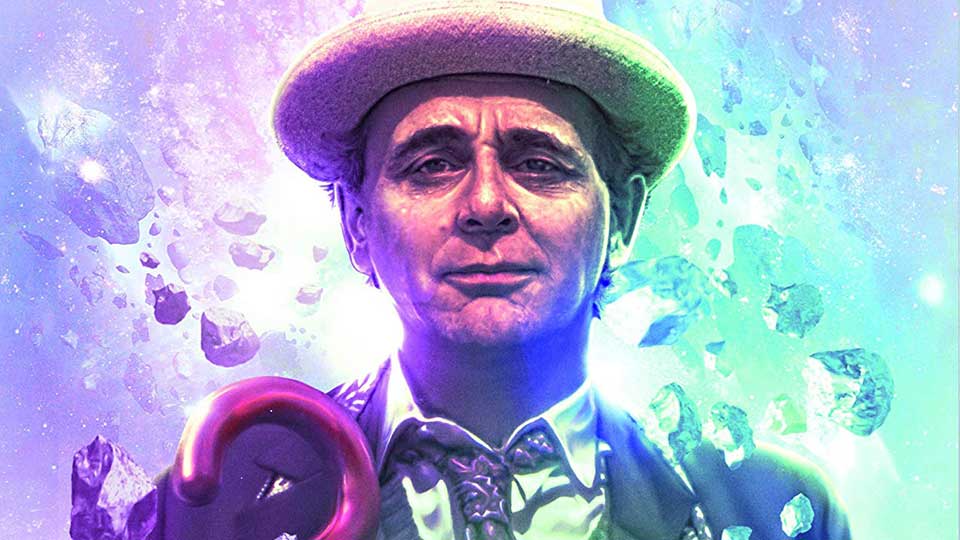 Unloved by the powers that be, Doctor Who’s original twenty-six-year stay on British television came to an end in 1989. But thanks to the talent involved, it went out on a high, with some of the most audacious and original storytelling in its history. Doctor Who The Collection Season 26 brings together all four stories from Sylvester McCoy’s third and final outing as the good Doctor on Blu-ray for the first time. Not only that, but the latest BBC release is positively bulging at the seams with extra features: some of them new, some of them repurposed from last decade’s DVD releases.

From the content of the actual 1989 programmes, it shows astonishing short-sightedness on the part of the BBC to imagine it was on its last legs and devoid of ideas. The opening story Battlefield is probably the weakest, but it still has plenty working in its favour, not least the final appearance of the Brigadier, Nicholas Courtney (there’s a beautiful tribute to him on the extras). A lot has been written over the years as to whether or not his character should have been killed off. The missed opportunity for a dramatic ending is partially compensated for by a moving performance from Jean Marsh as she comes to terms with the death of her former lover and sparring partner. There’s decent location filming at Rutland Water, but lacklustre sword-fights meshing uneasily with overly-busy incidental music combine to produce the low point of an otherwise great season. Perhaps better direction could have delivered more for the OK but seldom adored Battlefield? There are three different versions to enjoy spread over two discs: the original televised one, the extended VHS release and a new special feature-length edition with enhanced special effects.

One of Doctor Who’s strengths has always been the adaptability of its format, and the near-limitless opportunities for stories given such a wide premise. This is ably shown with the change of pace for the next story, Ghost Light. It is set in a creepy mansion during the Victorian era, and, in sharp contrast to the sunlit Battlefield, is studio bound. To maintain a sinister atmosphere, the lighting was dark throughout most of the filming. The cameras used at the time struggled in low light, leading to picture distortion on the DVD, a problem exacerbated by the advent of high definition televisions. This release has eradicated this issue, with an upscaled and remastered presentation of Ghost Light that looks magnificent on modern TVs. There’s now so much detail it’s like watching the serial for the first time, and Ghost Light in particular benefits from the upgrade to Blu-ray. It certainly justifies releasing a season with no film work (it was all shot on tape). This serial boasts some of the scariest moments in the series’ history, as well as a remarkably talented ensemble cast. Ian Hogg is unforgettable as Josiah Smith, hidden behind shaded spectacles, his skin peeling from his face. Sylvia Syms is perfectly cast as the austere Mrs Pritchard, and Sharon Duce makes a strong impression as Control. Familiar names Frank Windsor, Michael Cochrane and John Hallam also contribute to a tight and beautifully atmospheric piece about Darwinism and evolution. Alan Wareing keeps the direction focussed and turns in a serial that recalls the best of Sapphire and Steel in its unrelenting menace, where drama and intrigue are created out of a dense, clever and difficult script. An extended version incorporating deleted footage is new for this release.

The third serial is an all-time classic, and one of the greatest achievements in the history of Doctor Who. The Curse of Fenric has so much going for it that a single paragraph can’t do it justice. Doctor Who only rarely went for a wartime period – WWI forms the backdrop in the opening of The War Games, but The Curse of Fenric’s WWII setting is integral to the story and automatically gives it a more ‘adult’ feel. Like Ghost Light, Fenric has an incredible guest cast. Dinsdale Landen and Alfred Lynch (who, curiously, died within a fortnight of one another in 2003) steal the show as a double act of crippled genius and military commander. Celebrated performers Anne Reid and Nicholas Parsons (who proves he is a fine actor as well as light entertainer) also have moments to shine. Nobody would have predicted that Parsons’ doubting vicar would be one of the great guest turns in Who, but so it proved. The locations are perfectly-chosen and add a lot to the mood of the piece. The Haemovores are one of the best monsters ever to appear in the show, with the moment they emerge from the water rivalling for impact that of the Marshmen and the Sea Devils.

Fenric has some of the best extra features, and there are so many it’s spread across two discs. There is a documentary in which McCoy, Aldred and Tomek Bork (Sorin) return to the original locations. They even reunite with Nicholas Parsons at the church in Hawkhurst. At a distance of three decades, they recall working together. High definition filming and drone footage add to the spectacle, and it’s hard not to be wiping moistened eyes by the end of it. As with Battlefield, there are three versions: the broadcast one, the 1991 extended VHS edition, plus a special new feature-length cut.

The final story in this release is Survival – and for orthodox fans such as myself – it’s poignantly the last Doctor Who story ever to be broadcast. The script by Rona Munro is unlike anything Doctor Who had seen before. It is laden with sexuality, and uses the working class suburb of Perivale as a central location. The inclusion of Hale and Pace as shopkeepers is marmite – but I think they work very well within the context of the story. The incidental music score – by the brilliant Dominic Glynn – with its western-like stings – is easily amongst the all-time best and the isolated music soundtrack is well worth it.

There is a seventh disc which contains bonus features. The stand-out addition is the feature Showman – The Life of John Nathan-Turner. It looks back over the highs and lows of JNT’s life, including archive footage of the man himself reflecting on his extended stint as producer. It is, of course, tinged with sadness and regret that things worked out the way they did for him. Former friends and lovers, as well as companion Janet Fielding and the Doctors that JNT cast all contribute. It is not a love-in though, and Eric Saward recalls his acrimonious departure from the show. Location footage is taken at his childhood home, and there are photographic insights into his life with Gary Downie. It is not as detailed as the Richard Marson biography (the author contributes to the documentary) but running to just over an hour, it is a deeply affecting piece that JNT would probably think casts him in a fair light.

Taken all together, Season Twenty-Six was one that was bursting at the seams with talent at every juncture. Two of the stories in this boxset are undoubted classics that came together beautifully. Survival is a near-classic, and Battlefield a decent story that doesn’t quite compete with the glittering jewels surrounding it. It ensured that Doctor Who left our screens with its head held high. Not only that, but it proved the doubters wrong: Sylvester McCoy emerged not only as a fine Doctor, but as one of the very best.

This limited edition Blu-ray boxset is a must-have for all fans of the classic series. It has finally made Ghost Light look great, and added sharpness to all of the stories. The new extra features include a Behind the Sofa documentary for all of the stories. Companions Anneke Wills, Janet Fielding and Sarah Sutton give their analysis, as do Sylvester McCoy and Sophie Aldred. Fans solely of the classic series will be confused by the inclusion of two writers from the new series, which is my only gripe with this entire release, because their contemporary spin is irrelevant and brings me out of my reverie of nostalgia. Fans of both eras of the show may not mind their inclusion.

It’s time to celebrate a magical era of Doctor Who in all its glory, and remember why the Seventh Doctor was so special. Doctor Who The Collection Season 26 is a treasure trove.