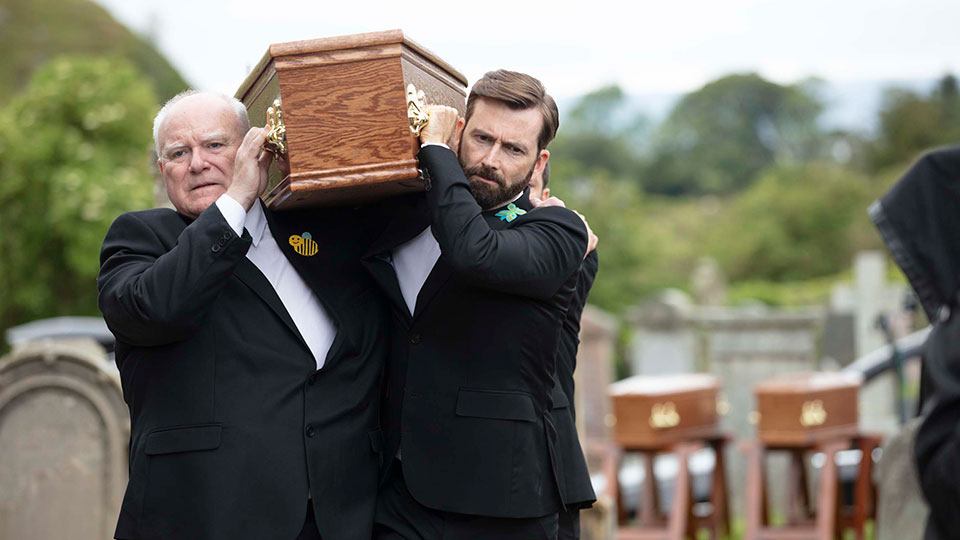 There were so many questions following the first episode of Deadwater Fell but did episode 2 shed any light?

If you want to avoid spoilers for Deadwater Fell, stop reading now.

The episode opened with a montage of different scenarios playing out including Jess (Cush Jumbo) and Tom (David Tennant) sharing a tender moment before she and Steve (Matthew McNulty) took him home from hospital and a teenage boy walking around the streets in his underwear.

Tom spoke to DCI Darlington (Laurie Brett) and Collins (Gordon Brown), sharing information about their life together. Jess sat by his side and Tom was caught off guard when Darlington asked about the car crash, which was caused by Kate (Anna Madeley) driving drunk. Tom then recounted his steps on the night of the fire, breaking down at points as he was overcome with emotion. When pressed if an argument had broken out, Tom insisted there was nothing.

Darlington informed him that he could see the bodies of his daughters and Jess left the room where Kate’s parents were waiting. Tom then cleaned up and polished his boots, and was quizzed by Jess about whether or not Kate did say anything to him before the fire. He didn’t the answer the question but joined Jess and Steve for the cremation service for Kate.

Jess started to feel guilt during the service and noticed a young woman crying at the back of the crematorium. As they left the service, Jess spoke to the young woman and introduced herself. The girl revealed her name was Sacha (Seline Hizli) who did teacher training with Kate and Jess asked if she’d had any idea that Kate could be capable of doing something like this. Sacha then passed comment about Tom putting on ‘a good show’ and then she left.

In the car on the way back, Tom grabbed Jess’ hand and as she remembered one of their sexual encounters, she pulled away from him.

The three then went to the funeral for the children where Tom’s mum was waiting as were Darlington and Collins. The community assembled to show their support and Steve was surprised to see his ex Sandra (Lisa McGrillis) had brought a boyfriend with her. Tom gave a speech at the funeral about his children, fighting back the tears as the attendees did the same.

Throughout the funeral Sacha’s words stuck with Jess, who watched Tom from afar to see if she could spot anything strange about his behaviour. He was comforted by his mum who helped him down from the pulpit.

At the station, Darlington watched videos of the girls as she hunted for clues. At the end of one of them, Tom was staring into the camera but not saying anything.

During the wake Sandra introduced her boyfriend Luke (Jack Greenlees) to Jess and Steve, but Jess couldn’t take her eyes off what Tom was doing. Jess picked up a tray of sandwiches and was annoyed when she heard Sandra passing judgement on Kate’s alleged actions. The two had a tense exchange before parting ways.

Jess spoke with Simon (Jamie Michie) who was upset that Kate wasn’t mentioned during the girls’ funeral. She went outside for some air where she found the plaque laid in memory of Kate had been vandalised.

After the funeral Jess took Steve’s kids to the doctor’s surgery with her and she asked the kids to stay in the waiting room. Steve turned up to support her and it was revealed they were undergoing their second round of IVF.

In a flashback Jess remembered going to see Kate after finding out that the first round of IVF had failed. The two friends embraced and Jess had arrived with two bottles of wine to commiserate the news. Kate tried to make her feel better and they were interrupted by Tom’s mum Carol (Maureen Beattie).

Dylan (Lewis Gribben), the teenager who was seen wandering around in his pants at the start of the episode, turned up at the police station drunk and in his underwear again. As that was dealt with, Steve took a closer look at the photos showing pine needles in the feet of the deceased Kendricks.

Darlington and Collins arrived at the school to question Jess and they tried to delve into conversations Jess had with Kate about her marriage to Tom. Jess remembered back to a night when she helped Kate undress and get into bed after they’d been drinking. Kate broke down saying she didn’t ‘want to feel like this’ and Tom entered the room where he dismissed Kate’s tears.

Steve went into the woods to search for evidence while Jess scrolled through a crowdfunding page for the Kendricks where she saw a message from Sacha. Steve found an abandoned bike in the woods.

Jess met with Sacha for drinks, who revealed that she’d fallen out with Kate after they’d shared a flat together. Explaining what happened Sacha told Jess that she’d met Tom who’d showered her with compliments but she said he didn’t like them being friends. It was inferred that she’d slept with Tom, which ended her friendship with Kate, and that made Jess think about her own affair with Tom.

Jess returned home where Steve was making dinner and complaining about Sandra’s new boyfriend. As he rambled on, Jess confessed to him that she slept with Tom once when she was drunk following the first failed round of IVF. Steve was floored by the news and Jess detailed how she’d felt manipulated and controlled by Tom during the sex. She asked Steve if she should tell the police and pleaded with him to tell her what to do. He reacted angrily and stormed off.

Steve drove himself to a pub where he drank and thought about Jess’ revelation. He returned home and Jess was in bed. She tried to speak to him but he ignored her.

The next morning Jess helped one of the kids with a cut on his arm as her phone rang. She noticed it was Tom and she ignored the call. In the bathroom Steve was cold towards her again and accused her of waiting until the second round of IVF had started before she told him the truth.

Jess gave a statement to Darlington where she detailed her sexual encounter with Tom. Darlington told her that they would have to inform Steve and Jess admitted she’d already told him.

Steve paid a visit to Dylan and told him he’d found his bike near the Kendrick’s house. To try and get him to talk, Steve gave Dylan a cigarette and asked him if he saw anything on the night of the fire. Dylan said he didn’t want to ‘get anyone in the shit’.

As Jess left the police station, she saw photos of Kate’s body and thought back again to the night when she put Kate to bed sobbing. Checking her phone, she saw she had a voicemail from Carol who asked if she was still OK to pick Tom up later that day.

In the car Jess asked Tom if he’d told the police about their fling. He said he hadn’t and she lied when he asked if she had. At Carol’s house, Jess and Carol had a conversation where Carol revealed she’d had depression following the birth of her child like Kate had.

Dylan sat down with Collins and Darlington for an interview at the police station. He told them that he’d seen Emily, one of Tom’s daughters’ running into the woods being chased by Tom.

Before she left Carol’s house, Jess had a call from Steve who told her that Tom was the person behind the murders of his family. Jess tried to make a quick exit but Tom was waiting for her. He hugged her and tried to point the finger once again at Kate. Jess left as Tom shouted after her to pass his love to the boys.

Later that day the police arrived to arrest Tom and we saw the scene that Dylan described, only it was Kate that came after Emily not Tom as he’d said.