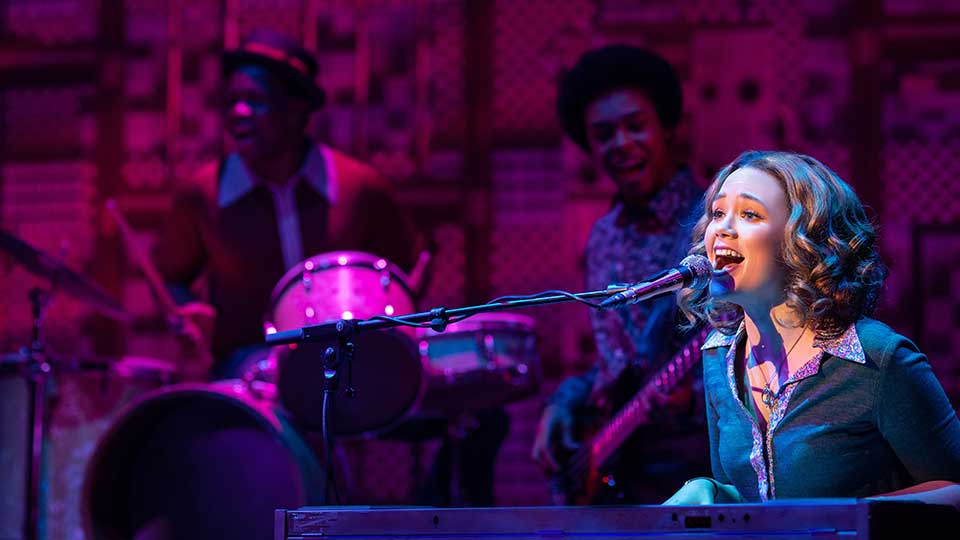 Beautiful – the Carole King Musical tells the moving and inspiring story of a legendary singer-songwriter whose music has been the soundtrack to the lives of several generations. The timescale spans from her big break in the music business, aged 16, in the late 1950s, through to the recording of her timeless classic album Tapestry in 1971. The story charts her at-times tumultuous marriage to lyricist Gerry Goffin.

Jukebox musicals are often a hit with audiences, and so Beautiful is proving. It is currently receiving a rapturous reception at the Churchill Theatre in Bromley – its current stop on a UK tour. Where this one stands out from a busy field is that the musical numbers are germane to the plot, giving insight into King’s emotional state, and layering well-known songs with a genesis story and an extra layer of meaning (especially Up On the Roof).

Daisy Wood-Davis is spectacularly good as Carole King. Not only does she have a terrific voice but she lives the character and brings her to life on stage. The journey from fresh-faced, aspirational sixteen year old to a mature woman and mother-of-two contending with huge professional success but personal difficulties is a challenge for any actor. But Wood-Davis pinpoints moments of transition on this arc with astonishing skill. By the time you get to hear her perform (You Make Me Feel Like) A Natural Woman, you’re so emotionally entranced that the result is electrifying.

Wood-Davis is part of an excellent ensemble. Adam Gillian impresses as Gerry Goffin, her writing partner and husband, capturing the essence of someone overly-idealistic and ultimately self-destructive. Yet the writers wisely avoid allowing Beautiful to become a forensic study of a failed marriage, or to bog the audience down with domestic details. Instead, the story is peppered with characters providing comic relief. Laura Baldwin and Cameron Sharp spark off each other as friends and contemporaries Barry Mann and Cynthia Weil. Both keep the audience entertained through Mann’s endearing hypochondria and Weil’s quick and often acid wit. Oliver Boot deserves a mention too for his role as producer Donnie Kirshner, who wins more than his share of laughs.

Beautiful is a show for those who love or lived through the music of the 1960s and early 70s. It is a celebration of the sounds and culture of a golden age. Hit after hit are brought to life by sequinned singers from a sizeable ensemble. Most are tracks that became hugely successful for other artists including The Righteous Brothers, The Drifters and The Shirelles. You may know some songs via other interpretations, such as The Loco-Motion – an early hit for Antipodean pop princess Kylie Minogue – and Chains, covered by The Beatles. Combining the output of two songwriting couples is a stroke of pure genius on the part of the writer – it leaves Beautiful with a deep well of the songs that defined an era to choose from.

Beautiful is everything that a jukebox musical should be. It offers an enormously entertaining evening, and a real theatrical event. This production is slick and doesn’t miss a note. Tickets are selling out fast, so grab them while you can.

‘Priscilla Queen of the Desert’ at Bromley Churchill Theatre review