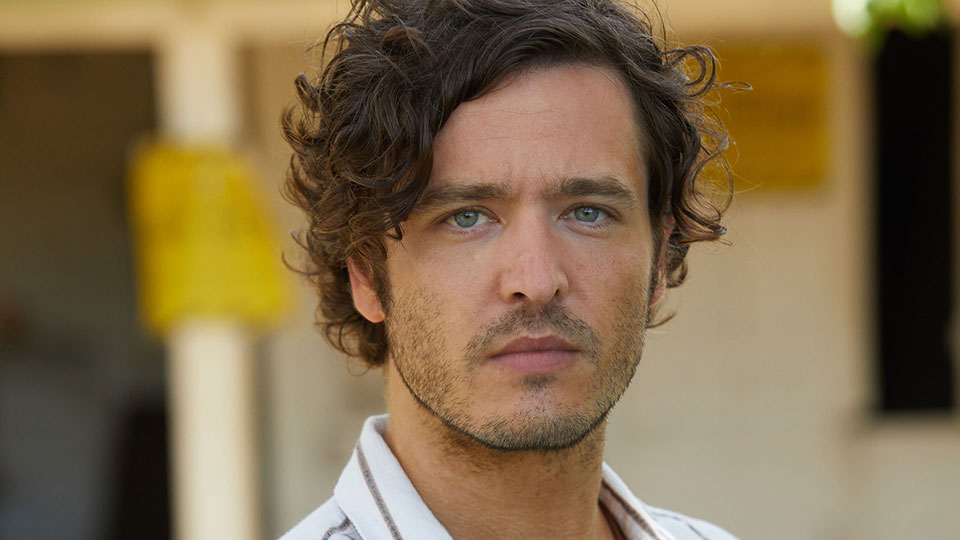 Death in Paradise returned for a ninth series last week and it continues with a new episode tomorrow night.

On Thursday night’s episode D.I. Jack Mooney (Ardal O’Hanlon) and the team are called out to an art studio on Saint Marie when acclaimed artist, Donna Harman (Louise Brealey), is found dead having been left in her workshop alone.

One of the suspects in the murder is her boyfriend Max, played by Alex Vlahos. Talking about his character Alex reveals:

“Max is the boyfriend and four-year partner of the victim of episode two, Donna. They are madly in love but it’s kind of a tempestuous and turbulent relationship, full of fireworks and passion. Max is an ex-model from London, who’s now sort of resting on his laurels I suppose with Donna. He’s sort of free-boating off her artistry and success. The start of the episode sees Max as one of the accused due to Donna’s demise.”

When Max finds out he’s a suspect in Donna’s murder, he doesn’t react well. Alex shares:

“Max is quite arrogant, overconfident and a fiery person but also incredibly relaxed and languid. He’s got quite a lot of contrasts, toing and froing and a lot of grey areas. Max sort of rebels and fights against the detectives and is very set in his ways that he is completely innocent throughout the whole entire episode. I guess people have to tune in to find out whether that is true or not…”

A previous fight with Donna is what sparks interest in Max as a suspect. Alex comments:

“The main point is that Max has got an incredible scar running down his body which was from a previous fight between the couple about a year prior to Donna’s demise. The detectives pick up on that and they pick up on the fact that on the day he’s questioned by the police, his knuckles are wrapped in a bandage. Also, Max acts quite shaky and he doesn’t do himself any favours at all, it’s a non-drinking house but he carries around his own personal flagon.”

Is Max the person behind Donna’s murder? You’ll have to watch Death in Paradise tomorrow night at 9pm on BBC One to find out!

Advertisement. Scroll to continue reading.
In this article:Alex Vlahos, BBC One, Death in Paradise