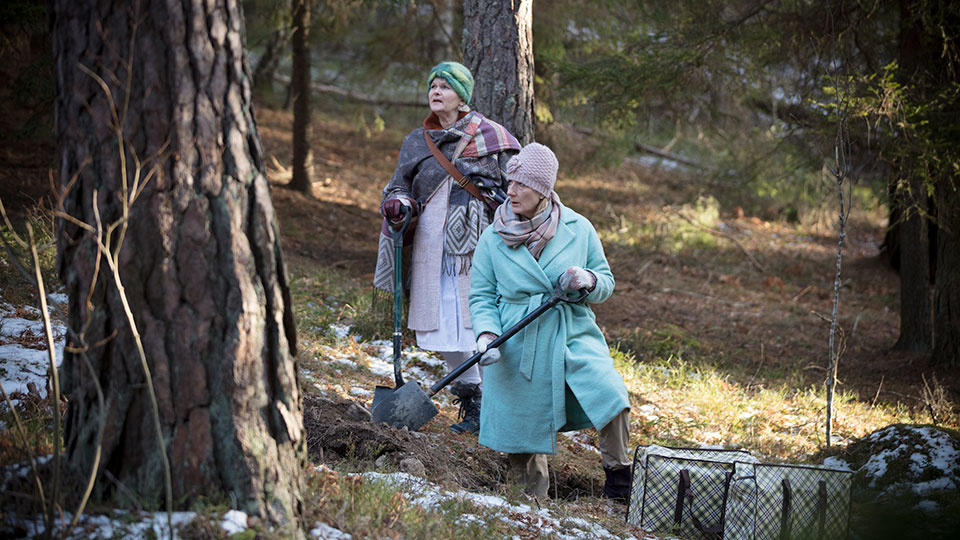 It’s not often Walter Presents gives us comedy, but this delightful Swedish series A Very Scandi Scandal (Enkelstöten in Swedish) is witty and beguiling. It centres around two grandmothers – Jenny and Cecilia – who are both going through difficult times.

If you want to avoid all spoilers for A Very Scandi Scandal, stop reading this article now.

Jenny is a teacher who is separating from her husband of 30 years, but has discovered that a pre-nup agreement signed at the start of their marriage is still valid – meaning she has virtually no money of her own, and cannot get a loan from the bank due to her age. And Cecilia is a doctor who – unbeknownst to her husband – has made some unwise investments in stocks and shares, and now finds herself in need of a large injection of cash to fund a property investment.

When one of Cecilia’s terminally-ill patients confides in her that his impending death will prevent him from pulling off a bank heist, Cecilia starts asking questions. Before long, with her patient’s approval, she convinces herself that she could pull off the robbery instead – and she recruits her friend, Jenny, as her partner in crime.

There’s much to enjoy in these 12 episodes (two seasons of six episodes each). The two leads – Lotta Tejle and Sissela Kyle – are fabulous as the grey-haired grannies and would-be criminals. Neither actor is particularly well-known outside of Scandinavia, but both have accumulated a rich catalogue of TV work over the years, and that experience shows in their under-stated and highly believable performances.

The writing is original and engaging, too. One’s sympathies lies very much with the two women who have, through no fault of their own, found themselves in desperate situations, surrounded it must be said by a variety of bullying and controlling men. Who could not have empathy with Jenny when an obnoxious father of one of her pupils lays the blame for his son’s poor grades on Jenny’s performance as a teacher, and proposes that she comes up with an “action plan” to address his own son’s laziness? Or Cecilia with having to cope with her busy-body husband, whilst still holding down a highly responsible job. And there’s a subtle message about gender inequality in there too.

Whilst discussing the morality of robbing the bank, Cecilia says to Jenny: “It’s only right. Think of how much less money we’ve made because we’re women. It’s about 8 or 9 million (Swedish Krona), excluding interest”. These are two highly-educated, law-abiding (for now, at least) women who feel ignored and under-valued – and they want to challenge that stereotype.

I’ve really enjoyed the opening episode and look forward to seeing how the storyline develops.

The full boxset is available to stream exclusively on Walter Presents via All 4 from 6th December 2019.