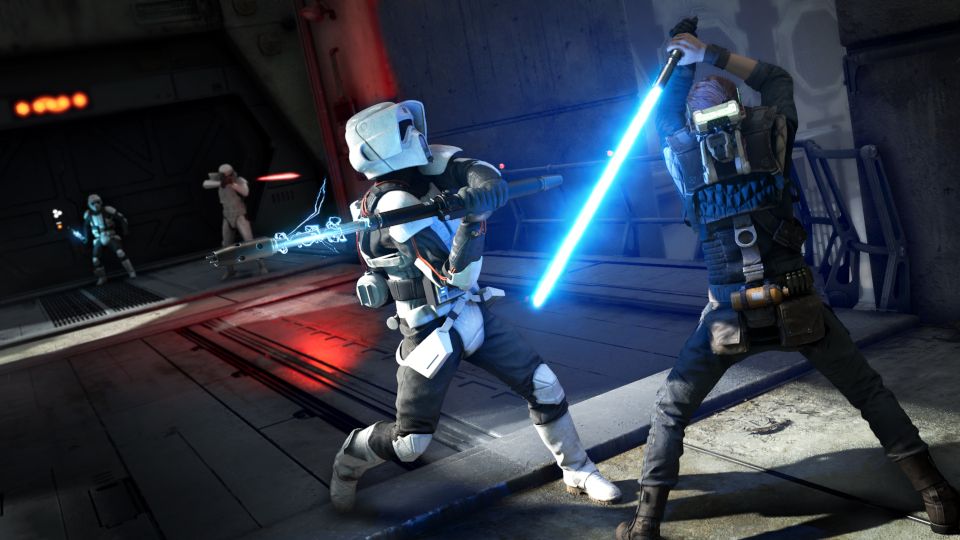 I think we can all agree that, EA’s handling of the Star Wars license has been… disastrous. For this title, they handed development over to the excellent studio called Respawn and have not added any multiplayer or micro-transactions. Too good to be true? Let’s see the result.

A few years after the call for Order 66, Jedi Padawan Cal Kestis is hiding on the planet Bracca doing odd jobs as a scrapper. His Jedi comrades are almost wiped out by the Sith Empire and he hides his Force abilities to maintain his safety. One day, he is forced to use the Force to save a friend from a fatal accident and shortly finds himself hunted by the Empire. A powerful Inquisitor, trained by Darth Vader, is dispatched to kill Kestis and he flees, knowing he doesn’t stand a chance. Whilst fleeing, he is rescued by pilot Greez and former Jedi Cere and taken aboard their ship, the Stinger Mantis. Cere takes him to a nearby planet and they set off in search of an ancient vault in hopes of restoring the Jedi Council.

The opening does a great job of feeling like a modern, gritty Star Wars title and later opens up into an exploration of the universe. As a moderate Star Wars fan, I was really happy to see the game focus on just a small part of the universe and not bog itself down too much. I always found what was going on off-screen more interesting than the main Star Wars plot and this is a great look behind the curtain. Cal is a pretty straight forward Jedi, he’s a little too bland for my liking but fine overall. Greez is the wise-cracking Captain and brings humour to the story and injects a little bit of heart. Cere is the most interesting character, she has a chequered past with the Force and the Jedi and her story becomes a focus point, without sacrificing the narrative.

BD-1 is Cal’s droid companion and to no surprise, Respawn have created another excellent robotic companion, it really feels like there is a bond between Cal and BD. The Second Sister is a great antagonist but the game wastes time with other enemies of no consequence and more focus on the core plot would have been better. The core plot itself is pretty simple and does a good job of setting up an adventure but after a great final chapter it ends too abruptly.

The core to any Jedi game is Lightsaber combat and put simply, its perfect. Players of the Souls series will be right at home here. You lock on and switch between enemies and focus on parries, blocks and dodges before getting in a fatal hit. It’s certainly not as difficult as the Souls games but there is a sense of challenge here and higher difficulty levels can be pretty brutal. As a Jedi you have access to the Force, Cal can push and pull enemies and items and slow down an object or a person. The key to this, is that it’s not overpowered, it’s enough to give you an advantage but not enough to be a cop out.

What’s great is you have to combine these powers with Lightsaber combos, otherwise you’ll be dead before you know it. Respawn have figured out that it’s best to give the player a small useful tool-set, rather than a bunch of useless systems and the game benefits in spades. Jedi: Fallen Order has a similar health system to the Souls series, it’s doesn’t regenerate but you have a couple of health items to heal you. These recover at meditation points but recovering them respawns enemies. It’s a simple system that works fantastically here.

Exploration is a big part of the game and while the maps may seem linear at first, they open up quite a lot when you unlock more abilities. The design of these levels is incredible and keeping up with the Souls comparison theme, unlocking shortcuts is a recipe for success. Actual traversal works well until you try to jump. Jump success seems to be done on a dice roll and it’s completely immersion breaking to see a sure-fire jump cause immediate death. There is a small levelling system that gives you incremental upgrades, they never blow you away but are enough to give you an edge. There are also many chests littered across the world that offer customisation upgrades but frustratingly, these are just colour swaps instead of new armour sets.

Visually, the games uses Unreal Engine 4 pretty well. It serves as a great precursor to the upcoming generation and the character models are incredibly life-like, as is the stunning hair simulation. Unreal Engine rears its ugly issues once again though, pop-in and freezes are plentiful and can be distracting. The score is a great Star Wars interpretation but doesn’t sit amongst the best in the series. Voice acting is uniformally excellent, with Cere (Debra Wilson), Greez (Daniel Roebuck) and the Second Sister (Elizabeth Grullon) being particular highlights.

By focusing on a tighter narrative, Respawn have delivered a story you easily get invested in and have created a great cast that deserve another title. The excellent combat system make engagements exciting and the incredible level design screams exploration. Despite this, constantly finding colour swap skins feels wasted and the lack of meaningful side content makes the game a little repetitive. The bugs and animation issues are a staple of UE4 but are still unacceptable. Respawn have delivered a great title here though and while they get a lot of hate (for well deserved reasons), props must be given to EA for putting out a single player game of this calibre. There’s a few missed marks on an overall great adventure and my biggest hope is that EA continue with these single player releases.