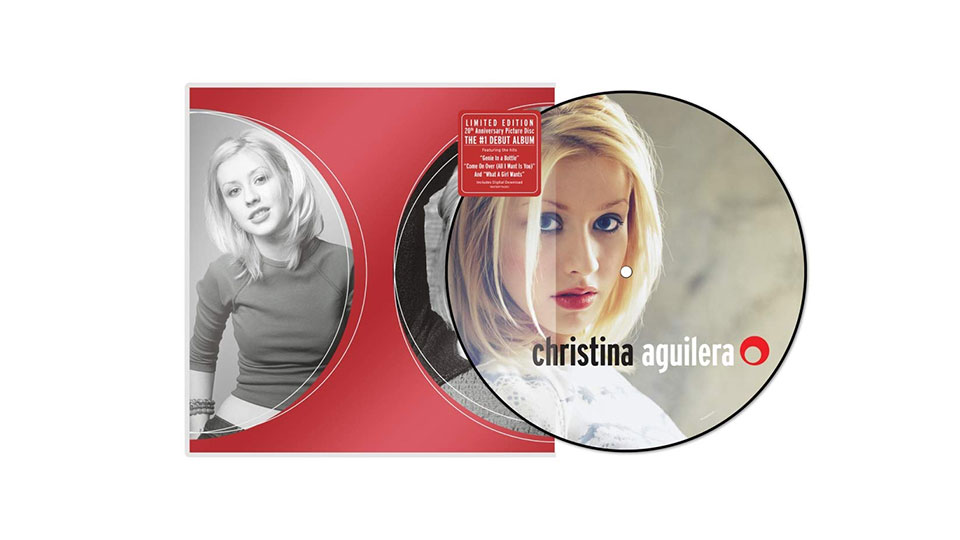 Christina Aguilera made a breakthrough with her debut single proper Genie in a Bottle in 1999, which topped the charts in the US and the UK. It followed on from Reflection, a song that was part of the soundtrack for Disney’s animated box office smash Mulan. Rising up around the same as her former Mousketeer pal Britney Spears, Aguilera was moulded into a similar squeaky-clean pop starlet whose songs straddled mainstream pop with R&B influences. The self-titled debut album, which arrived in August 1999, went on to sell more than 14 million copies worldwide and remains Aguilera’s most successful record to date.

20 years on from the album’s original release, and to tie-in with The X Tour, Christina Aguilera has been released on limited edition picture disc vinyl. The first thing that should be noted is that the vinyl reissue doesn’t actually mirror the original CD release of the record. The version of What a Girl Wants that features is actually the single version rather than the original mix that appeared on the first pressings of the album. Interestingly though the original mix of Come On Over (All I Want Is You) is included and not the single mix, which was retitled Come On Over Baby (All I Want Is You).

Time has been a lot kinder to Aguilera’s debut record that it has to Britney Spears’ classic debut …Baby One More Time. In part that’s because Aguilera has serious pipes and she’s always been more about the voice than anything else. While she didn’t have a hand in any of the songs on the record, and the music isn’t reflective of what she actually wanted to be making, I actually have a soft spot for this album. The single choices are obvious and the strongest tracks on the record, even if the powerhouse moment I Turn To You was criminally underrated here in the UK.

There are other solid tracks here though too. The 90s R&B feel of So Emotional is a proper jam, Love For All Seasons really showed her range and the Robin Thicke co-write When You Put Your Hands On Me is a cheeky pop/R&B mash-up. For me though it’s all about closing track Obvious, which was the first time you really heard what Aguilera could do with her voice. The song shows her singing properly without the screeching and grunting she started to do from the Stripped album. The power and control is impressive, and it’s a song that I wish she sang live.

The other songs on the album are a bit forgettable. Somebody’s Somebody is breezy but it doesn’t grab you, Blessed is too saccharine all these years on and Love Will Find a Way is the definition of filler. Still if you compare that to most debut albums, there’s much less to skip over than you’d expect.

The vinyl reissue features the album cover on one side and a promo shot from the era on the other. It’s packaged in a plastic see-through sleeve and there’s a double-sided colour printed sheet in detailing the songs and credits and featuring more images from the original artwork. Sound-wise it’s solid (picture discs tend to get a rough time from music fans) and the songs are clear without distortion.

Christina Aguilera may not contain Aguilera’s most memorable hits and it may not be particularly ground-breaking but it’s a solid 90s pop record. It introduced Aguilera to the world and gave her the platform to transform into the artist she is today. Personally I’d prefer to hear her sing more like she does on these songs and tone back the screeching but that’s just my preference. I loved this album when it first came out, and I still love it now 20 years later.