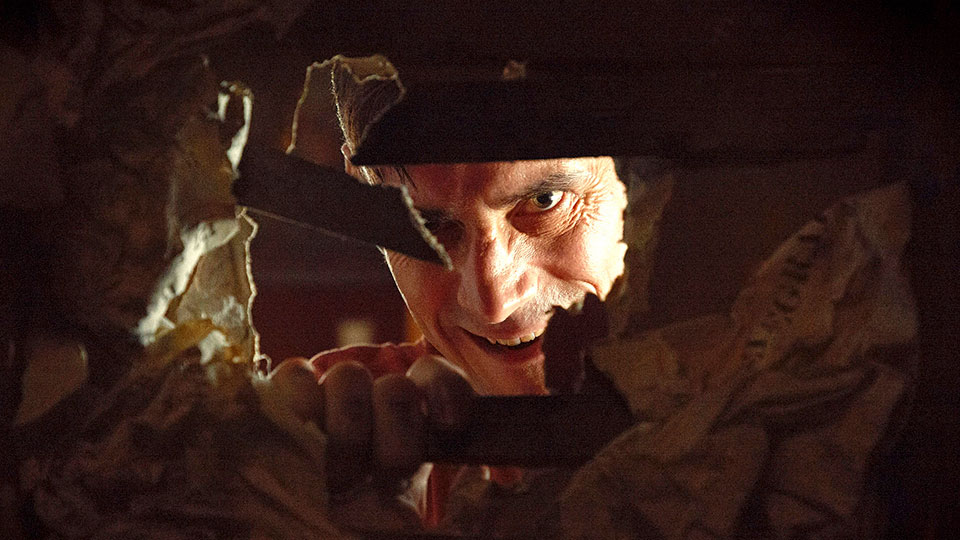 Don Koch (Phil Brooks aka C.M. Punk) convinces his pregnant wife Liz (Trieste Kelly Dunn) to buy a run-down Victorian home so they can have a fresh start following a breakdown in their marriage. Eager to renovate the house himself before Liz moves in, Don and his dog Cooper take up residence as Don starts to explore the new property. He finds black slime leaking out of the walls and pipes, as well as a host of unsavoury discoveries as he sets to work. When local girl Sarah (Sarah Brooks) turns up and tempts him into bad habits, Don realises that the house holds a dark and dangerous secret, but it could be too late for him to get out of its tight grip.

Girl on the Third Floor was shown at Arrow Video FrightFest back in August and it went down a storm. I didn’t manage to catch it then so I was eager to watch it now it’s available on VOD. Slow-building and incredibly unnerving, Girl on the Third Floor isn’t your typical haunted house film and director and co-writer Travis Stevens showcases a knack for drawing out the suspense for maximum impact. Don’s acquaintance with Sarah is clearly bad news but due to a past pattern of poor choices and behaviour, he ignores the warning signs until he’s far too deep into the situation.

As Don renovates the house he calls upon his friend Milo (Travis Delgado) for assistance and spends time meeting the locals, all of which speaking cryptically about the house he and Liz have bought. Stevens is very good at visual scares, often placing creepy occurrences in plain sight adding to the unnerving feel that the film has running right through it. From reflections in mirrors through to marbles dropping out of nowhere and goo oozing from plug sockets, Stevens knows how to keep the viewer on the edge of their seat and constantly guessing.

I felt the payoff was worth the investment. I don’t want to divulge anything from the film’s second half as that would be a disservice to the film-maker but if you go into this knowing next to nothing about it, you’ll get the best experience. The climax is frenzied and chaotic, and at times a little reminiscent of Mother starring Jennifer Lawrence, and it suitably brings the nightmarish story to a satisfying conclusion. There are some intense visual scares and it’s actually a lot gorier than you’ll expect from the opening half.

Phil Brooks aka WWE star C.M. Punk is surprisingly good as Don. Looking a little bit like Mad Men’s Don Draper, and with similar vices, Brooks keeps the audience on side even when the behaviour of his character is fairly poor. He shows a good range of acting skills and this role should lead to us seeing more of him on the big screen. Trieste Kelly Dunn, best-known for Banshee, is featured predominantly via video chat on Don’s phone until the final act of the film. She embraces the craziness at the end, and like Brooks’ Don, she’s a sympathetic character you’ll find yourself caring about.

Girl on the Third Floor is not for those who are scared easily. It’s intense, seriously creepy and a whole lot of fun. As someone who consumes a large amount of horror films every year, it really impressed me and it marks Stevens out as a filmmaker to keep an eye on. Stylistically the film feels very 70s with some Hitchcockian-like camera work and aesthetically it’s pretty mesmerising to look at. Add to that solid performances and decent scares, and Girl on the Third Floor is a film you should definitely add to your watch list.