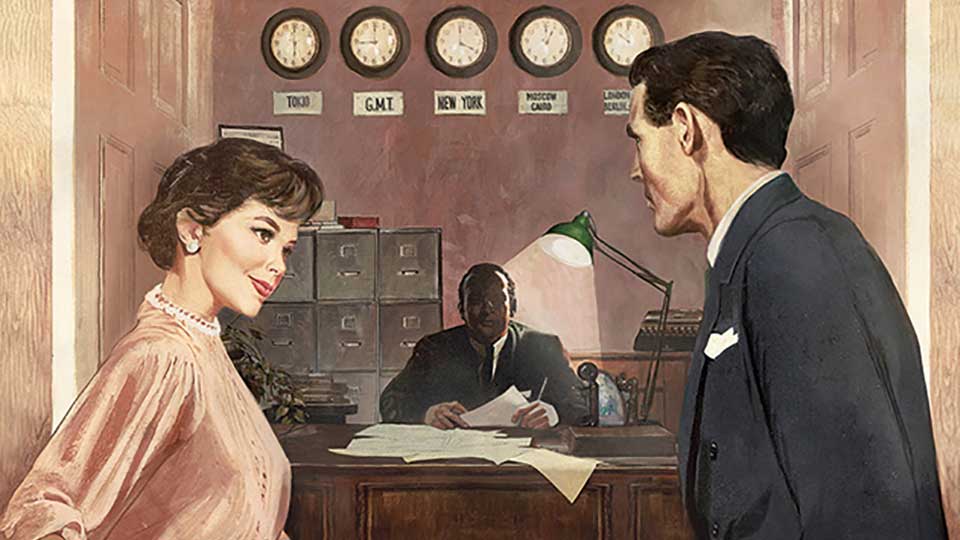 Live and Let Die is only the second James Bond novel written by Ian Fleming (after his debut with Casino Royale), originally appearing in 1954. It’s easy to forget that, because it was the movie that introduced Roger Moore – the third Bond – to the role of the super spy two decades after the book was published. It’s always interesting for aficionados of both the books and the films to see what the producers salvaged from Fleming’s characters and plot, and what was reinvented for the big screen.

Live and Let Die is a treasure trove for James Bond fans – there’s a healthy amount of the big screen adventure that survives intact, such as Bond’s adventure in Harlem tracking down Mr Big, the involvement of Bond girl and psychic medium Solitaire, a subplot about voodoo and, delightfully, the chair that spins around to send Bond into Mr Big’s lair (without Moore’s excellent quip about a “funny turn”). However, Mr Big’s nefarious plot is a clever racket in smuggling gold that Bond must locate, infiltrate and smash.

What this novel offers Bond enthusiasts is the chance to see how it influenced other Bond movies besides the one it gives its name to. Remember the scene where Bond is tied to a girl and hauled through shark-infested waters from For Your Eyes Only? You’ll find it here. It’s interesting to note that the character of Quarrel, Bond’s black ally, appears in the book and film versions of Live and Let Die and Dr No. You’ll also find about a quarter of the plot of Licence to Kill here, including the gunfight in the warehouse and exploding fish tanks, along with the shark attack on Bond’s CIA buddy Felix Leiter, even down to the grisly note left on his mauled body: “He disagreed with something that ate him.”

Seeing how these various plots from the Bond mythology were originally woven together into one fine novel is a real pleasure. As always, there are caveats that are needed when reviewing Fleming’s work. Live and Let Die can hardly be accused of being an exceptional work of literature. But it succeeds on its own merits as a page-turner of an espionage thriller. The plot rattles along at a terrific pace, and at only two-hundred and fifty pages, Fleming writes economically. In a similar way to Dr No, Fleming uses shortcuts to reach the climax he’s most interested in writing, and the only section where the novel meanders and drifts into fantasy is when Bond locates Mr Big’s operation and finds a way of breaking in. Fleming wasn’t keen on rewrites, and weak hinges such as that do stand out. Thank goodness he pulls it back with a cracking ending.

Throat-clearing is also required about the fact that the book, published sixty-five years ago, doesn’t entirely live up to the social and moral standards of today. Thus, the New York setting and preponderance of black characters (many of them villainous in intent) leaves some racial language that is no longer acceptable. Fleming, a clever author who was ahead of his time, probably introduced Quarrel as a black ally for Bond to off-set any ideas that the novel is a comment on racial superiority. Just as historians shouldn’t judge our ancestors by the standards of today, neither should readers denounce long-dead authors who lived in different times.

Overall, Live and Let Die is a pulsating adventure, and a vivid and refreshing read. This splendid edition by the Folio Society ties into the same gun metal-coloured collection as previous releases including Dr No and Goldfinger.

As with the earlier titles in the range, Live and Let Die is illustrated by Fay Dalton, who produces some outstanding work for this one. The opening illustration of Bond and Moneypenny standing flirtatiously and earnestly in the doorway of M’s office, their boss’ face shrouded in shadow behind a desk, evokes not only the dynamics between the three regular characters but also the period setting of the mid-1950s. The Chevrolet cutting in front of Bond’s yellow cab outside the St Regis on the corner of Fifth Avenue and 55th Street, is full of movement and drama, as well as instantly establishing the exotic story location. The final painting is of Bond and Solitaire stripped, and bound together, but not in the way Bond would have liked it.