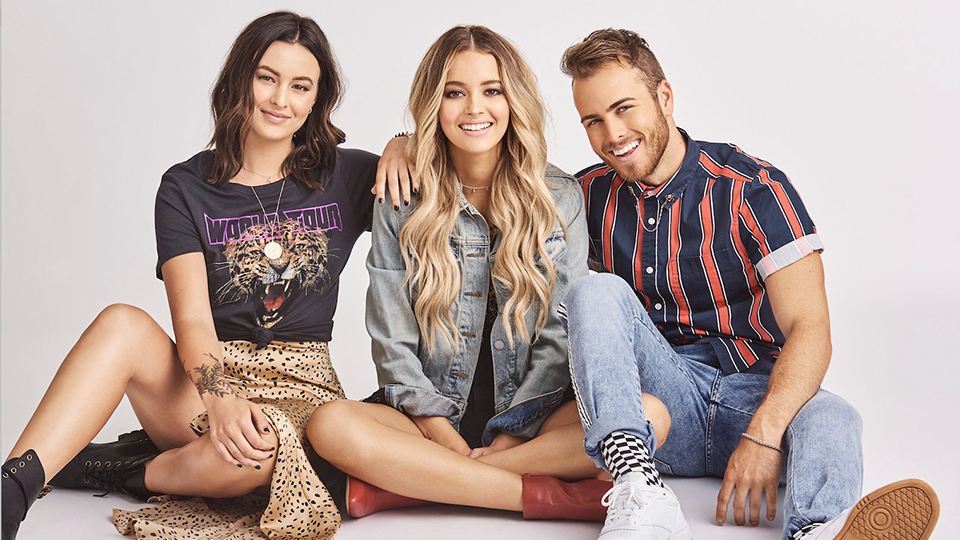 Temecula Road first came to the UK in 2017 where they wowed audiences at C2C: Country to Country.

They returned later that year for the first-ever Country Music Week and two years on, they came back to the UK to perform as part of Country Music Week once again. With plenty of new material out in the world, the band has grown a lot in two years and wowed with their tight harmonies.

I sat down with the band following their performance at the Country Hits Radio Daytime Hub at the weekend to talk about the new music, their evolution as a band and their cover of Alabama’s festive classic Christmas in Dixie.

Welcome back to the UK guys. A lot has changed since I saw you last in 2017 including a move to Nashville…

Emma: Yes! We did move to Nashville in May. That’s been amazing. We’ve been writing a lot and releasing music.

Dawson: We’ve been in the studio writing. It’s been great.

Maddie: Actually, we were in the studio about two days before we came here so we have a lot of exciting things to look forward to.

Dawson: Maybe Not just came out. There’s more music on the way so it’s going to be awesome.

Emma: And a Christmas song that may already be out (laughs)

I noticed that one was out, it’s a cover of Alabama’s Christmas in Dixie isn’t it? I was listening to it just this morning…

Emma and Maddie: Oh my gosh!

Emma: That’s the one. We haven’t actually pushed it out yet, just cause it so soon and it’s still October.

Maddie: We recorded it in August…

Emma: Which means we started singing it in July.

Why did you pick that song to cover?

Dawson: It’s such a good song!

Emma: As far as we know, we’re the only people to have covered it and released it.

Dawson: Alabama is such a great band. Absolutely legendary and classic, and they have a lot of harmonies as well so it’s cool to put our own harmonies to it and have a new take of that. We’re really excited and we hope you guys love it as much as we do.

It’s nice to hear a cover of a Christmas song that isn’t what everybody else is doing. Well done guys!

Dawson: We appreciate it. That’s one of the big things we’re going for so thank you.

When I saw you performing at the Country Hits Radio Daytime Hub this morning, I couldn’t believe how much you’d grown as a band. It was like a totally different band to the one I saw when you were finding your feet in 2017…

Dawson: First of all, thank you so much!

Emma: That means the world, thank you!

Dawson: We have been working really hard. It’s been the best two years since we’ve seen you. Almost every single day we’ve been getting together, working with a metronome and been trying to make the harmonies as tight, as full and as luscious as we possibly can, and just practicing the songs. As we’re growing as a group, we’re are also growing as individuals as well. I think that we all bring something different to the table and we’ve become closer as a family and as friends and as a band. That definitely comes out on stage too so we really appreciate that. That’s awesome. That’s what we were going for!

One thing I did notice is that you’re sharing the lead vocals a lot more on these new songs. It gives you that Little Big Town quality where you sound like a different band depending on who is singing. How are you going to further evolve your sound moving forward?

Emma: I love this question. I think moving forward, we’re all leads in this band and I think that we’re all improving in every way. If we can showcase that the best way possible, then we’re going to do that.

Dawson: We all have different voices, which is cool because we can come together and make something really cool, but we also individually have cool things as well. We like to put our heads together and see what works best and whose voice is going to compliment a certain song or a certain verse. We’re always trying different things – switching up leads, tempos, keys of songs…

Emma: Just trying to make it the best it can be.

Dawson: With the writing too, now that we’re doing a lot of the writing on our own and with the amazing writers in Nashville, Tennessee… it’s really great because we can cater the song or write the song to cater us. That’s something really interesting as well that we didn’t know about until we really started writing, which we started writing after last time you saw us. That’s definitely a huge factor in how we’ve changed.

This music does sound more reflective of who you are as a band. It feels like you found your feet a lot more. You are definitely more confident. The energy and chemistry on stage is completely different than when I saw you a couple years ago. Obviously you know each other incredibly well but are you getting more comfortable in front of international audiences now?

Emma: Totally. Oh my gosh. Thank you so much. Like you said, we’re a family now and…

Maddie: (pointing between herself and Emma) we’re literally family!

Emma: We’re together every day and we’re traveling a lot. The bond is just so much stronger. Not that it wasn’t strong before but we’ve been a band for about five years now. Going through everything together, ups and downs and moved across country…

Trust me, you’re not getting old. I on the other hand am a lot greyer than the last time I saw you…

Emma: I didn’t even notice!

Dawson: No, I honestly didn’t either.

You’ve put out three singles this year and you’ve got the Christmas single too. Is the plan to keep releasing singles or are you working up to an EP or album?

Emma: Singles for now. Then when we feel one of them needs to be pushed more to radio we’ll do that, whichever song feels like it’s going to go there.

Dawson: Maybe we can build an E.P. around it too. We’re writing so much. There’s so much unreleased music. We want to release it all, but we do have a plan. We’re getting the singles out. There’s gonna be a lot more great music coming.

Maddie: We’re in the studio now and were right before we came.

Dawson: We’ve got a bunch of great stuff coming. Next year is gonna be awesome, we’re gonna release a bunch of songs then too. Who knows, maybe an E.P. and then eventually there will be an album.

Lyrically and thematically all the songs you’ve put out this year are so different. Are there any themes coming up in the studio or are you just writing and recording what you’re feeling?

Emma: I think one of the things for sure is just writing around the harmony base. That’s the driving force here. The dynamic is different every time because sometimes it’s three of us that go into writes or it’s two of us. It’s a different dynamic every time, which is cool because it makes every write different. That’s what I love about it.

Maddie: No specific lyrical theme though.

Dawson: Something we really liked about these three and having these three come first out of the new era of us, was that they are all different in a way that showcase different parts of us and different emotions and feelings. They also feel pretty cohesive as well. It definitely feels like us, even though it’s slightly different areas of us and we’re definitely writing what we’re feeling, growing up and having all these emotions. It’s definitely great.

For me it’s all about your harmonies. You were so tight this morning and that was an early slot to perform in too. I was so impressed!

Emma: It was early (laughs)

Maddie: I think we left the hotel at 4am Nashville time.

Emma: We are prepared though. Any situation, we’ll be prepared.

Dawson: Nothing planned yet but there’s stuff in the works. We’re hoping and keeping our fingers crossed because we love it out here and we love you guys. Y’all are so supportive.

Emma: In February, we’re doing a cruise with Train called Sail Across the Sun Cruise. That’s going to be really fun. We did that a couple of years so we’ll be back there.

Maddie: We’re going to the Bahamas.

Emma: That’s gonna be fun. We have Stagecoach next year.

Dawson: CMA Fest is probably going to be lined up and obviously a lot more new singles coming out. It’s gonna be great.

Dawson: Not at all! Come to Nashville!

Dawson: If you guys will come out, we will absolutely 100% play so if we can get that lined up that would be a dream.

Temecula Road’s latest single Maybe Not is available to download and stream now. Take a listen to it below: