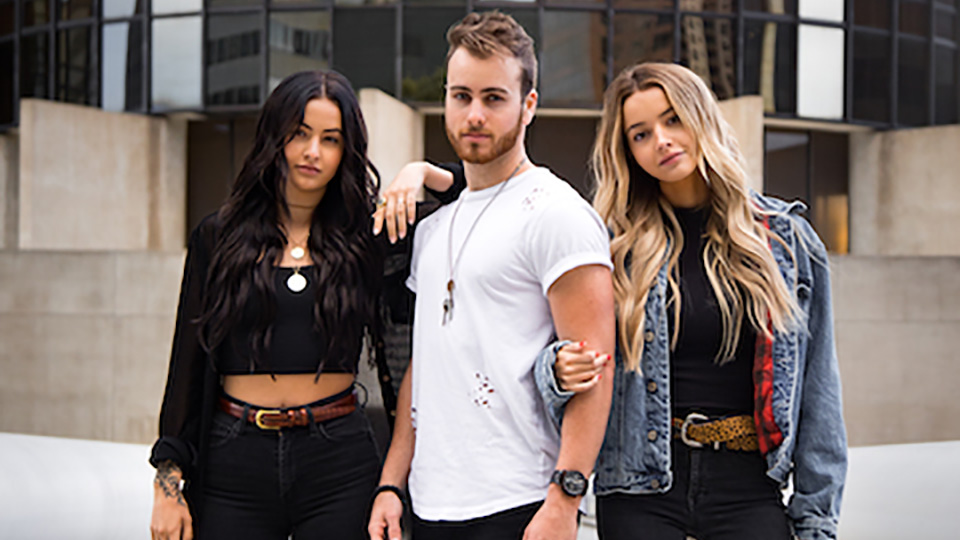 Californian-trio Temecula Road were last in the UK in 2017 for Country Music Week. It was their second trip over to the UK that year following a well-received series of performances during the course of C2C: Country to Country. Back in the UK once again for Country Music Week, Temecula Road opened the Country Hits Radio Daytime Hub and showcased just how much they’ve grown as artists since the last time we saw them on this side of the pond.

The set list for the performance was all-new material including the recent singles they’ve been dropping on download and streaming services. Opening with Wish I Could Take That Back, I was blown away by just how much more confident the band is two years on. I remember back to C2C and Dawson often took the lead but this time round his confidence was matched by Maddie and Emma. The trio’s natural chemistry radiated from the stage and their harmonies were incredibly tight.

Current single Maybe Not was a highlight with Maddie’s vocals really shining. She’s really grown as a stage performer too and she bounced off Dawson and Emma as they performed the track. Something else I noticed is that the band shared the leads a lot more on this trip over giving their sound a bit of a Little Big Town twist; by that I mean that they sounded completely different depending on who took the lead.

Temecula Road threw in a cover of the Eagles’ classic Desperado, which really showcased their voices. The stripped-down arrangement was beautiful and the harmonies were mind-blowing. The trio is so in-tune with one another that you can’t help but be mesmerised, and in awe, while watching them.

For the final two tracks the band treated the audience to their recent singles Fades and Never Knew I Needed You. Both songs are more mature than the music we heard from the group a couple of years ago and it shows off their abilities as writers as well as performers. Their sound is perfect for the current radio landscape in the US, mixing country and pop for songs that have a broad appeal.

Watching Temecula Road yesterday was like watching a completely different band from the one I saw back in 2017. Their confidence has rocketed, their songs are stronger and more mature, and their harmonies are ridiculously tight. If they keep up the quality that they’ve achieved with their current output, they could well give Lady Antebellum a run for their money in the coming years.