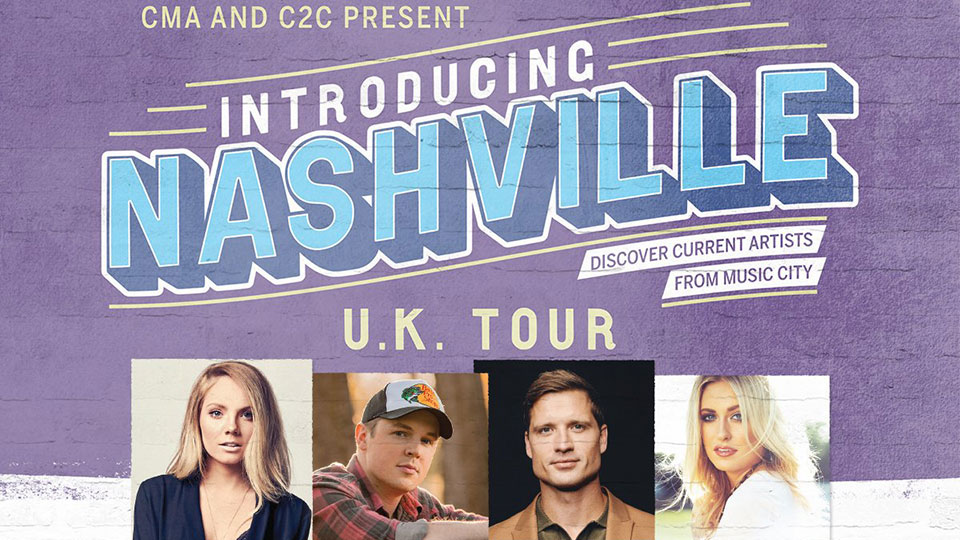 Country Music Week is back for a third year with international artists flying in to headline shows over the course of the next 7 (well actually 8) nights. Following last night’s C2C: Country to Country line-up announcement, Country Music Week kicked off with Introducing Nashville, a writer’s round-style evening that has already toured Europe and the UK. Rachel Wammack, Travis Denning, Walker Hayes and Danielle Bradbery took to the stage for a just over 2-hour show to perform their songs and tell the stories behind them.

Working in rotation, each of the line-up performed a song starting with Rachel Wammack and her emotionally powerful Closure. Of the line-up Wammack is the only artist that hasn’t been to the UK before, and we were told earlier in the day that she was feeling a little under the weather. Had we not been told that, it wouldn’t have been obvious as she sounded magnificent. Her powerhouse vocals filled Cadogan Hall and it was fun watching the other three artists watching on in amazement as she performed. All of her songs were moving but in particular new single Something People Say was the highlight. It sent shivers down my spine and made me hungry for a full album, as did the gorgeous What He Does.

Between the four artists they performed 20 songs over the course of the set, frequently engaging the audience with their anecdotes and stories. Travis Denning established earlier on that he likes to drink and emphasised that a lot of his songs were about drinking. He had a confident energy that kept the crowd hooked while he performed songs such as I Know Where It’s Going and After a Few. For me, his finest moment came on the love song I’m Gonna Love You, which he pointed out would be his only love song. He told the audience that he wrote it after seeing the Dixie Chicks twice in three days in Nashville.

Walker Hayes stepped in to the line-up when Chris Lane pulled out. There was some complaining from some areas of the UK Country music audience but he received a strong reaction. A naturally charismatic person, and an engaging performer, Hayes is aware that he’s not everyone’s cup of tea and he joked about his ‘haters’ before performing the razor-edged Your Girlfriend Does. As a songwriter his lyrics shone through on Halloween and his current single Don’t Let Her, while You Broke Up With Me sounded brilliant acoustically. Hayes had the audience singing along and he was one of the night’s standouts for me. If you can listen to Leela’s Stars and still have dry eyes, you’re clearly missing a heart.

Of the four artists, Danielle Bradbery has probably been over the most amount of times. Hearing her in an acoustic set-up is really the best way to experience her because you get to really hear the deep layers and textures of her incredible voice. Sway was her first song and she got the audience singing but for me, she shined brightest on the incredible Worth It, hitting notes no human should hit and making it look simple. New track Never Have I Ever, nothing to do with the saucy drinking game, was a promise of things to come and Potential sounded stronger with the production stripped back.

Across the set we sang, we laughed and we listened as an audience of appreciative country music fans. There’s something so special about a writer’s round and having four artists of this calibre on the same stage was a real treat. They are all so incredibly different but they complemented each other and it was nice to see them singing back-up for one another, playing parts of the arrangements and just generally cheerleading one another. It doesn’t matter if you like the individual artists because together they put on one hell of a show and I expect to see some brilliant collaborations coming out in the future as a result. Introducing Nashville was the perfect way to ease into Country Music Week and it sets the bar incredibly high.