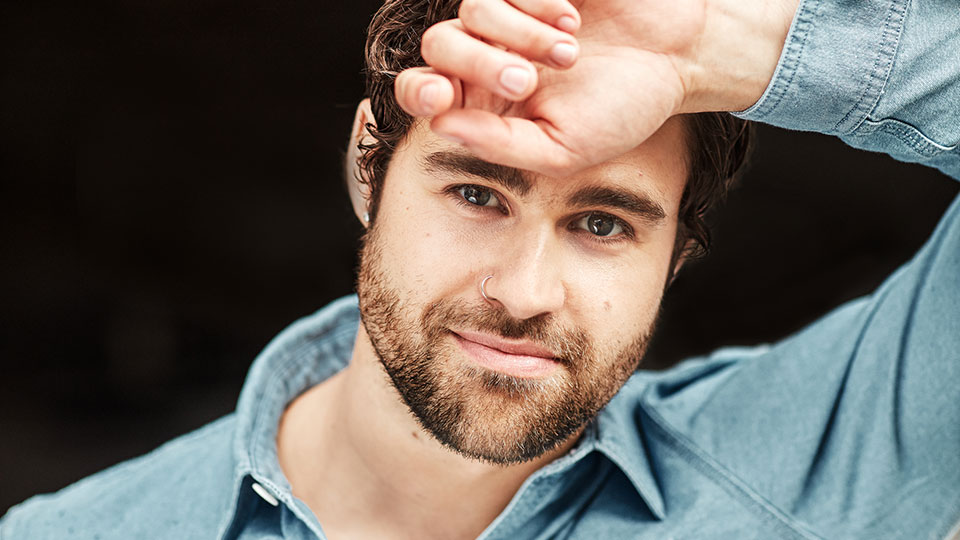 Canadian actor Cody Kearsley is best-known for playing the role of Moose in The CW’s hit series Riverdale.

Next week his new show Daybreak arrives on Netflix and Cody has a lead role in the apocalyptic series. Based on the comic books of the same name by Brian Ralph, all 10 episodes of Daybreak will debut on 24th October 2019.

I caught up with Cody to talk about Daybreak, discuss his character Turbo Bro Jock, and to find out about his return to Riverdale.

You’ve got this new series coming out on Netflix called Daybreak, which starts next week. What’s it all about?

Daybreak is a post-apocalyptic story where once the apocalypse has happened the adults are turned into these zombie-like creatures called Ghoulies and all the children are left to their own devices to form a society. They build these tribes based off of their actual cliques like the jocks have their tribe, the cheerleaders have their tribes and so do the gamers. These traditional cliques are now warring against each other and trying to survive.

You play the character Turbo Pokaski. What do we need to know about him going into the series?

Turbo Pokaski was the quarterback, the star of the school and he was the big man on campus in high school. In the new world he is taking command over the jocks. Our army is militant group, sometimes a meritocracy, and basically the goal is to protect the children. We’re trying to protect everyone but I definitely rule with an iron fist. Y’know those guys that can’t get out of the high school glory days so they still go to the same bars and still talk about their high school football achievements. That’s him. He’s still living in the high school. He’s still with all of his jocks. He’s still trying to protect everyone but he’s definitely one of those hyper-masculine bullies I guess (laughs).

How did you get involved with this project?

For a lot of stuff with actors, we don’t always go out for roles that we really are passionate about, sometimes we just get roles for the job. This is one of those roles where as soon as I got the script and I read the pilot, I ordered the graphic novels immediately. I fell in love with this story, the world and the character. This is a dream role for me. I put every effort into booking this part and thankfully I got it. I actually had a really good feeling about this one. I don’t normally get that, which is why I ordered the graphic novels immediately. I lucked out.

It was incredible. This is the biggest project I’ve been on in terms of scale and budget and world building. It’s also my first series regular (role) so I had a strong character arc as character development. I really got to dive in and be a big part of the creative process of the directors, writers, producers and the other cast. It was one of those roles that I’ve been waiting for since I started getting into (acting).

What challenges have you had getting into the character?

The first thing is I’m from Canada. I don’t really play football. This is kind of embarrassing but I didn’t even know there was a separate team for offensive defensive line. I thought it was all just the one same team (laughs). I had to learn a lot about football, which helped the character a lot because calling plays on the field and conducting your players and organising how you’re going to best attack or the best approach worked really well in terms of commanding an army. I created this football game, which is a high school playbook that turned into a military strategy guide about how to survive the zombie apocalypse. That was how I approached figuring him out.

You mentioned this is your first series regular role. I imagine that’s a lot more work so what’s the been like for you?

It’s great. With Riverdale and these TV show where they have a 23 episode season, it moves so quick and there’s so much material to get out. On Daybreak we had about a month before we shot. We had the script to rehearse and we got to rehearse with all the directors and writers before we shot an episode, and they took their time because there’s only 10 episodes. Being a series regular now I really got to have a creative input on it. I’ve from a theatre background and it was much more that feel – building unity and a family, all working together toward making this one project really great. The rehearsal and the exploration is something that, being in the position I am now, allowed me to have that opportunity.

As Daybreak is a Netflix show, did you find you had more creative freedom over the things you could do on the show as opposed to regular network TV?

100%. Some of the stuff, especially my character who is a little bit of a monster, that I had to do on this, I probably would not be able to do on a network show. With having 10 episodes, that gives us the time to actually explore those things.

With the series dropping on one day as opposed to the week-by-week transmission, you’re going to get feedback on the show pretty quickly. People are very vocal on social media. Are you prepared for that?

Yeah. It’s going to be pretty cool. We shot this thing a year ago now and it almost felt like a dream, like it never really happened (laughs). I’m like, ‘when are we going to see that poster? When are we going to see that trailer?’ Now, it’s hit like a tsunami. Everything’s out and people are sending me pictures of posters and billboards all around the States – Times Square and L.A. – and the trailer looks incredible. Now it’s hit us all I’m like, ‘oh this was actually a reality!’ (laughs). I’m ready, I can’t wait to see all 10 episodes.

I hear that we’ll be seeing Moose again in season 4 of Riverdale. I know plot details are always tightly under wraps but what can you tease about his return?

In season 3 Moose and Kevin were going strong until Moose left. Is there any hope for those two?

There could be hope. I don’t know what’s going to happen but later down the road, potentially there’s hope for them.

Are there any other projects you’ve got on the go at the moment?

I have my own theatre company in Vancouver called Vagrant Players Theatre Society, we’re producing a play in January. I’m in Georgia right now filming an indie sci-fi film with Bruce Willis. I’m producing my first feature film next year, which I’m really excited about.

Daybreak is released on Netflix on Friday 24th October 2019. Riverdale’s fourth season airs on Netflix in the UK and the CW in the US. Watch the trailer below: