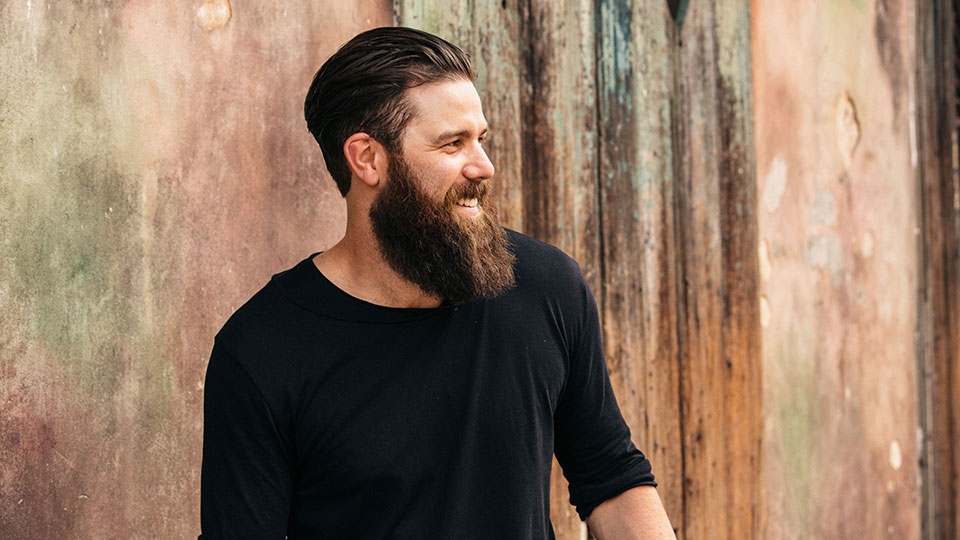 Jordan Davis grabbed our attention with the release of his 2018 debut album Home State.

The record is home to the hit singles Singles You Up, Take It From Me and Slow Dance in a Parking Lot, and it’s established him as one of the most exciting new artists in the Country music genre. Jordan is currently on the road with Old Dominion, playing his first-ever live shows in the UK.

I caught up with him backstage at the Eventim Apollo Hammersmith in London last week to talk about his first trip to the UK, find out where he’s at with album number two, and to discuss his hopes to remake his favourite Christmas record.

You finally made it over to the UK! You must know your fans here have wanted you to come over for a while now. What are you looking forward to and expecting from your fans?

Thank you! I’m just glad to get to play these songs live. We’ve seen how supportive the UK fans have been since the record came out. I hate that it’s taken me this long to get over here but super excited to get over here and finally give them a chance to hear it live. It’s one of my favourite ways to perform, we’re just doing acoustic guitar, small drum set and my guitarist is over here with me. It’s kind of stripped down. I get talk about the songs some and play ’em. It’s going to fun!

Are you testing the waters to see about coming back and doing a full band tour at some point?

Oh yeah, I definitely think we’re going to do that, especially after the last couple of shows. They’ve just been amazing. Germany was awesome. Stockholm was great. Amsterdam was great and I’m kind of expecting the same thing (in London) so for sure we’re gonna get back over here.

You’ve been on the road with Old Dominion for quite a while now haven’t you?

Yeah, a whole year pretty much.

What’s the experience been like and what have you been learning?

Man those guys are great. This has actually been the most time we’ve really gotten to spend with them just because the venues are smaller so we’re tighter. We were doing arenas back in the States and they’re busy running all over the place. It’s good this time because we’ve gotten to sit down and drink some beers and get to pick their brain on some stuff man. That’s a band that has been grinding, grinding, grinding and now they’ve blown up. I think you can learn a lot from from guys like Matt (Ramsey) and Trevor (Rosen) and the whole band in general, but just how they go about their business, how they get their show together to their warm up routines. They’re just really good dudes.

They’ve been over here a lot too the past few years….

Yeah! I didn’t realise how much they’d been over here. I was talking to Geoff the other day, I ran into him in a pub, and we sat and had some beers and he was telling me about the first time they came over here and how every time it just continues to grow and grow and grow. It’s pretty cool.

Did you get any tips about winning over UK audiences?

Not really. I feel like they’ve been pretty supportive from day one in just supporting what I do and they dig the music so. I haven’t got anything I need to ask them (laughs). They would know.

Home State has been out for a little while now and Slow Dance in a Parking Lot is the single in the US right now. Have you started working on the next record yet?

Yeah, we’ve actually got six or seven songs recorded for it. We’re releasing some new music in a couple of weeks and then we’ve got another song coming out with a pop act that I’m a huge fan of. I’m ready for everybody to get to hear that. The full record will probably be early next year.

What kind of themes have been coming up in the studio and the writing?

Pretty much all the songs have been have been written after Home State. There’s a couple songs we went back and got that we didn’t get a chance to put on Home State that we liked a lot that we’re gonna be able to get out now. It’s just the life changes man. I’ve been married and expecting a kid at the end of next month so it’s just what’s going on in my world.

Have you found the process for your second album a bit easier or has it been just as difficult as the first record?

I think it’s always difficult just because it’s something we care deeply about, and my producer’s the same way. We want to get it right and want it to sound right. I think it’s a little bit easier this go around just because we have a fan base and I think they understand me a little bit more so easier to get music out now. You’re not so scared like on the first album where you’re like, ‘Oh my God is anybody going like this?’ We’ve played enough shows and can see that people like it so it’s been easier from that standpoint. The toughest part of it is not remaking the exact same record and pushing a little bit in areas that way whether it be from the production side of it or the writing side of it. That’s been the biggest hurdle for me, just not trying to make Home State 2.0.

Yeah. There’s been a lot of people that I feel I could say that they possibly may have done that. If you stick to who you are and what made you make the first record, the second record should be pretty easy, other than you just wanting it to be really, really good. Right now I have been able to write a lot and I got a lot of songs that I love. Now we’re able to go out and test and get reactions off of ’em. I think this record is going to be even better than the first.

Are you always keen to play new songs on the road and see what reactions they get?

I haven’t done it a ton. Home State has been so great that it kills me to play a show, especially a headline show, and not play every single song that we have out. I know at some point it’s going to be really tough to do that but right now I’m in the spot where I have twelve songs out in the world, that’s it, so for me to leave a show and either get a message from somebody or somebody tweet at me or whatever and say, ‘hey man you didn’t play Made That Way’. It’s stupid of me not to, if I have a record that I know people like and that could be the whole reason why they decided to come to my show to hear that song. That happened early on so from then on I told the band, ‘look guys if we have a headline show and we have the entire set to play, we’re going to play the entire record’ and that’s something we’ve done. We haven’t tested out a ton other than just acoustic stuff that I’ll get up and play. We’re playing two new songs tonight that that I’m really, really big on and that we’ve already recorded but I just love playing them. I said that when we came overseas that we wanted y’all to be the first ones to hear this new stuff so we haven’t played it back in the States yet.

Yeah, the first to yay or nay. Now don’t ruin it man! This is the fifth show and we’ve got four thumbs up so… (laughs).

Have you found when you’ve been touring the album that there’s any songs that have really gone down well with the audience that maybe you didn’t expect?

Leaving New Orleans is one that kind of shocked me in the response on that one. Going ‘Round is one that always surprised me. I felt really good about all the singles. Slow Dance (in a Parking Lot) was always one. From the first time I played Slow Dance out I realised that was a big song. There’s a new one I’m playing out that I’m going to play tonight called I Met My Wife in a Bar. That always gets a pretty great reception.

I’m looking forward to hearing it…

I’m excited to play that one. I always set it up really stupid. (The audience are) always laughing thinking I’m going to play this funny song about meeting my wife in a bar and it’s actually kind of serious (laughs). Maybe I just need to intro it better!

You’re going to be pretty busy with touring and recording for the rest of the year but is there anything else you have coming up?

We have a song with a pop artist that we can’t say who it is yet because I think she’s got some other music coming out. I’m excited to get that out. I’m really proud of the message of it and I’m really proud of the writing on it. She’s a co-writer on it, which is really cool and and she’s just an all-around pretty bad ass artist. I’m happy that I have a song out with her. That’s one thing that I’m really stoked about.

Do you find collaborating with artists from different genres quite inspiring or challenging?

Definitely inspiring, especially with somebody that you look up to as a writer. To send a song over and say, ‘hey I would love you to sing on this’ and then to have her not only want to sing on it but also want to tweak it to make it more her… as a writer that felt pretty good. It’s definitely challenging but a good challenging.

Any plans for any Christmas songs?

I would absolutely love to remake Nat King Cole’s greatest Christmas songs record at some point, definitely not this year, but at some point in my life I will remake that record and just do it my style. It could be 10 years from now but that will happen before I stop singing.

It’s a rite of passage isn’t it? Everyone has to have a Christmas record at some point…

Jordan Davis’ debut album Home State is available now. Watch the video for Slow Dance in a Parking Lot below: