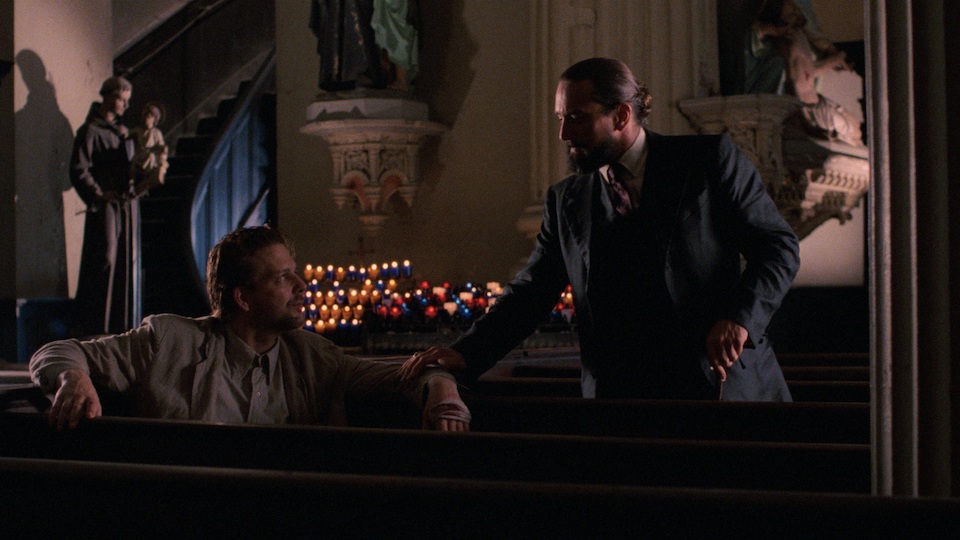 Alan Parker’s hyper-stylish and atmospheric neo-noir-horror Angel Heart arrives on Blu-ray and UHD this week, following a stunning digital 4K restoration. This thrilling and wildly ambitious take on the classic Faust legend was hugely controversial on original release, with one notorious scene almost earning the film an X-rating. Lukewarm reviews followed, and the film made a loss at the box office. The intervening decades however have been kind to Angel Heart, and it has gone on to become something of a cult classic.

Mickey Rourke, still at the height of his powers – young and ridiculously handsome, with the same edge of danger about him that elicited comparisons with Dean and Brando – stars as Harry Angel, a New York private detective. He is hired by a law firm, representing the sinister Louis Cyphre (Robert De Niro) to track down jazz crooner and WWII veteran Johnny Favourite. The job takes Angel from the frost-bitten streets of Brooklyn, to the sweat-soaked Southern-gothic vibes of New Orleans, and into a labyrinthine nightmare of voodoo, sex, and murder.

Alan Parker makes the most of such ripe material (based on the novel Falling Angel by William Hjortsberg), imbuing the film with a visual style and atmosphere that makes Tony Scott look restrained. Bursting with the kind of stylistic flourishes that had made Parker one of the most acclaimed commercial directors of the 70s, Angel Heart is gorgeous to look at. Brian Morris’s production design stunningly recreates 1950s New York and the backstreet slums of New Orleans, perfectly complementing the masterful cinematography from Michael Seresin, which gives the film its unique visual identity. With the moody score and pulsing sound design, Angel Heart effectively traverses between being a shadow-filled homage to 50s gumshoe flicks, and a trippy psychological horror.

Yes, it is overblown, and laden with incredibly unsubtle metaphors, and overtly ridiculous religious imagery, but it works. Anchored by Mickey Rourke’s superb performance – arguably the last great work he did until The Wrestler – the film descends into a beautifully absurd, blood-drenched madness. Lisa Bonet delivers a memorable turn as a young voodoo priestess connected to Johnny Favourite, whilst De Niro chews the scenery (and a boiled egg in an extremely menacing way) as the devilish Cyphre.  If it’s one you’ve not seen in a while, or even completely passed you by, this new release of Angel Heart is well worth checking out.

To mark this new edition, Studiocanal have pulled together a decent selection of special features. Most of them however, have ported over from previous special edition DVDs. First up is an introduction to the film from Alan Parker, who also provides an audio commentary. Both of these are from previous releases.

The disc also comes with all the original press materials, including news stories, profiles of the cast and director, and interviews with Alan Parker and Lisa Bonet. There’s some very brief behind-the-scenes footage, a gallery of on-set photographs, and a brilliant original teaser trailer, which positions the film as The Exorcist meets Chinatown, and then goes to show pretty much the entire plot of the film.

If you’ve just watched Angel Heart and wanted to learn more about some of the Voodoo you saw in the film, then you’re in luck. A Background in Voodoo is an in-depth documentary all about the various aspects of the religion, presented in five separate chapters. If all you’re really interested in is the film however, then give it a miss.

The best feature on the disc is the interview with Alan Parker from Cineastes des années 80 (Filmmakers of the 80s – a documentary series made by French cinema channel OCS). This is an extensive and insightful look back at the making of Angel Heart, with some great bits about his two leading men, and Rourke’s obsession with wanting to compete with De Niro.