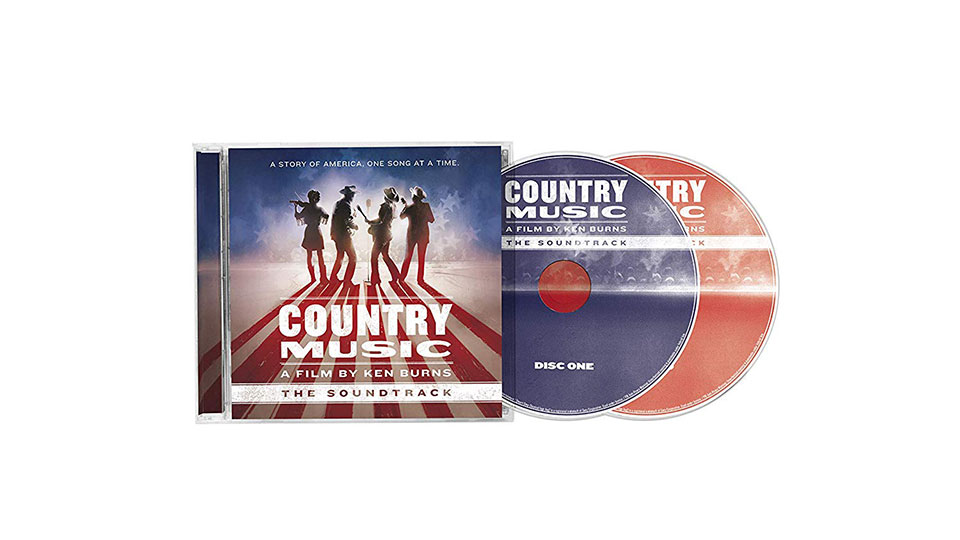 Emmy Award-winning filmmaker Ken Burns has been creating a lot of buzz with his latest project Country Music. The film takes viewers on a journey through the history of the much-loved genre starting with the early Appalachian ‘hillbilly’ recordings through to singing cowboys, bluegrass and more. Burns asks the question ‘what is Country music?’, something that lots of people are currently asking when looking at the US charts. The film features nearly 600 music cues and there are several soundtrack releases available for you to enjoy.

Country Music – A Film by Ken Burns (The Soundtrack) is available as 5CD box set, a 2CD release, a 2LP collection and on digital. This review focuses on the 2CD release, which features 41 songs. The first disc kicks off with The Carter Family’s Can the Circle Be Undone (Bye and Bye) and ends with Merle Haggard and the Strangers’ Hungry Eyes. There are so many classic songs on here that have stood the test of time including Crazy by Patsy Cline, Ring of Fire by Johnny Cash and Loretta Lynn’s Coal Miner’s Daughter.

The second disc contains some of the most recognisable songs from genre. Tammy Wynette’s 1968 classic Stand By Your Man opens the collection and there are lots of standouts across the 18 tracks. Kris Kristofferson fantastic Me and Bobby McGee is a classic as is Waylon Jennings’ outlaw favourite Are You Sure Hank Done It This Way. No Country collection would be complete without some of the genre’s Queens so it’s fitting that Dolly Parton’s Jolene and Reba McEntire’s Somebody Should Leave have been included.

Other highlights include Willie Nelson and Merle Haggard’s Pancho and Lefty, Emmylou Harris’ Boulder to Birmingham, and The Judds’ 80s hit Why Not Me. The collection comes to a close with The Nitty Gritty Dirt Band’s Will the Circles Be Unbroken.

There really isn’t anything bad to say about Country Music. For anyone who wants a comprehensive history of the genre, the 2CD version is a good stepping stone and you may find you want to explore further with the 5CD box set. The selections on this release are perfect, showcasing all of the different kinds of Country music the genre has to offer. If you haven’t seen the film yet, make sure you catch it as it’s brilliant!

Disc 1 – 1. Can the Circle Be Unbroken by The Carter Family 2. Blue Yodel No. 8 (Mule Skinner Blues) by Jimmie Rodgers 3. Fox Chase by Deford Bailey 4. I’m Thinking Tonight of My Blue Eyes by Nitty Gritty Dirt Band 5. Mountain Dew by Grandpa Jones and his Grandchildren 6. I Want to Be a Cowboy’s Sweetheart by Patsy Montana And The Prairie Ramblers 7. New San Antonio Rose by Bob Wills & His Texas Playboys 8. Wabash Cannonball by Roy Acuff 9. Honky Tonkin’ by Hank Williams with His Drifting Cowboys 10. It’s Mighty Dark to Travel by Bill Monroe & His Blue Grass Boys 11. New Mule Skinner Blues by Maddox Brothers & Rose 12. Foggy Mountain Breakdown (Single Version) by Lester Flatt & Earl Scruggs with The Foggy Mountain Boys 13. It Wasn’t God Who Made Honky Tonk Angels by Kitty Wells 14. I’m So Lonesome I Could Cry (Single Version) by Hank Williams with His Drifting Cowboys 15. Crazy Arms by Ray Price 16. The Long Black Veil by Lefty Frizzell 17. El Paso by Marty Robbins 18. Ring of Fire by Johnny Cash 19. Crazy by Patsy Cline 20. I Can’t Stop Loving You by Ray Charles 21. Coal Miner’s Daughter by Loretta Lynn 22. Kiss an Angel Good Mornin’ by Charley Pride 23. Hungry Eyes by Merle Haggard And The Strangers

Disc 2 – 1. Stand by Your Man by Tammy Wynette 2. You Ain’t Goin’ Nowhere by The Byrds 3. Me and Bobby McGee by Kris Kristofferson 4. Girl from the North Country by Bob Dylan with Johnny Cash 5. Are You Sure Hank Done It This Way by Waylon Jennings 6. Jolene by Dolly Parton 7. Boulder to Birmingham by Emmylou Harris 8. Whiskey River (Live at Harrah’s Casino, Lake Tahoe, NV – April 1978) by Willie Nelson 9. Pancho and Lefty by Merle Haggard & Willie Nelson 10. He Stopped Loving Her Today by George Jones 11. Don’t Get Above Your Raisin’ by Ricky Skaggs 12. Somebody Should Leave by Reba McEntire 13. Why Not Me by The Judds 14. Streets of Bakersfield by Dwight Yoakam with Buck Owens 15. Where’ve You Been by Kathy Mattea 16. Go Rest High on That Mountain by Vince Gill 17. I Still Miss Someone (Live) by Rosanne Cash 18. Will the Circle Be Unbroken by Nitty Gritty Dirt Band

In this article:Country music, Ken Burns