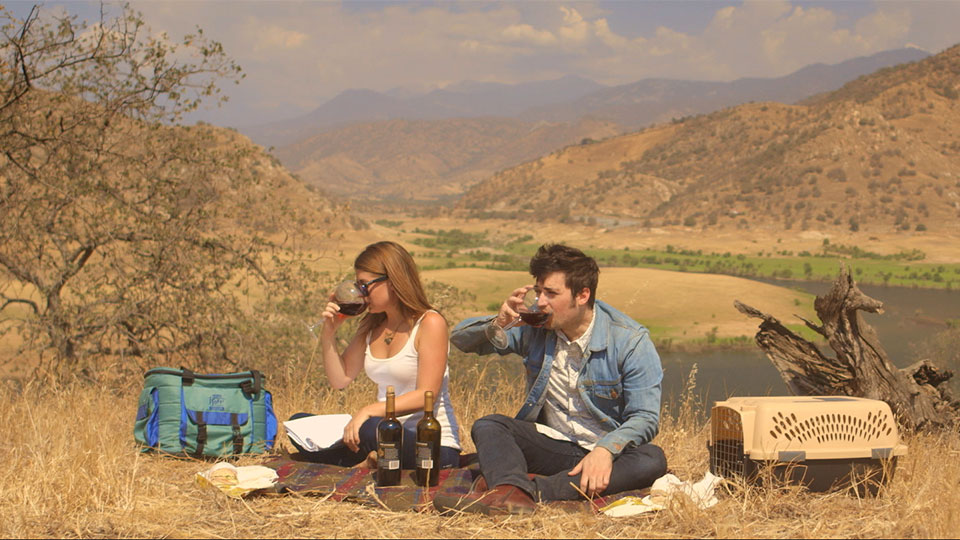 Struggling writer Marc (Kyle Cooper) receives the news that his grandmother has passed away. Her last wish was for Marc to spread her ashes around her mountain cabin with the help of Lindsay (Lyndsey Doolen), the girl he was dating at the time but has since broken up with. Marc convinces Lindsay to accompany him to the cabin to honour his grandmother’s wishes and also believes it’s an opportunity for him to win her back. As the estranged couple settle down for the night, they get a surprise when Jeff (Joe Hartzler) and his girlfriend Ren (Melissa Hunter) show up, having booked the cabin weeks earlier. The foursome agrees to share the cabin, which impacts on each of them in unexpected ways.

Double Eagle Ranch is the feature film directorial debut of Austyn Jeffs. It’s a romantic comedy with a quirky edge where the central character Marc, is a narcissist who is completely oblivious to how his behaviour affects the people around him. That’s a sharp change from the usually charming lead you have in a romantic comedy but that’s what makes Double Eagle Ranch a compelling watch. As you catch glimpses of Marc and Lindsay’s relationship, prior to their break-up, you can completely understand why they went their separate ways. Marc was, and continues to be, frequently insensitive and while Lindsay’s hardly a ray of sunshine and positivity, she’s more appealing to the viewer than Marc is.

What Jeffs does well is to provide sharp contrasts for those two characters with the introduction of Jeff and Ren. Jeff is basically everything that Marc isn’t – decent, kind and compassionate, while Ren is kooky and eccentric but her wide-eyed optimism makes her unexpectedly endearing. The wide chasm between the two couples provides plenty of opportunity for both drama and surprises as the film progresses. Jeffs continually pokes fun at the rom-com genre, consistently going against convention but somehow still managing to keep the audience engaged.

The four lead actors deliver solid performances. Kyle Cooper does a great job of being a believable jerk while Lyndsey Doolen plays for the audience’s sympathy as Lindsay whilst indulging her character’s own selfishness. Joe Hartzler and Melissa Hunter provide plenty of comic relief and it’s interesting to see the actors transform their characters as the film’s plot throws them into the middle of Marc and Lindsay’s relationship. All four actors commit to the film’s quirky sense of humour and they are fun to watch.

There are a couple of issues with the film. It’s pretty long for a start and could have been trimmed down a bit. The bigger problem though is Marc’s dreams of his grandmother, which tend to jar with the flow of the film. A few times I wondered if I’d missed something but the scenes tend to pop up without much warning ripping you out of the main narrative.

Double Eagle Ranch is a romantic comedy with a difference. It’s a breath of fresh air to watch something in this genre where the lead characters are unlikeable and it’s fascinating how much you care about what happens to them, even though you don’t like them. Jeffs has created something different and while it may not to be to everyone’s tastes, it made me laugh a lot and left me with a smile on my face.