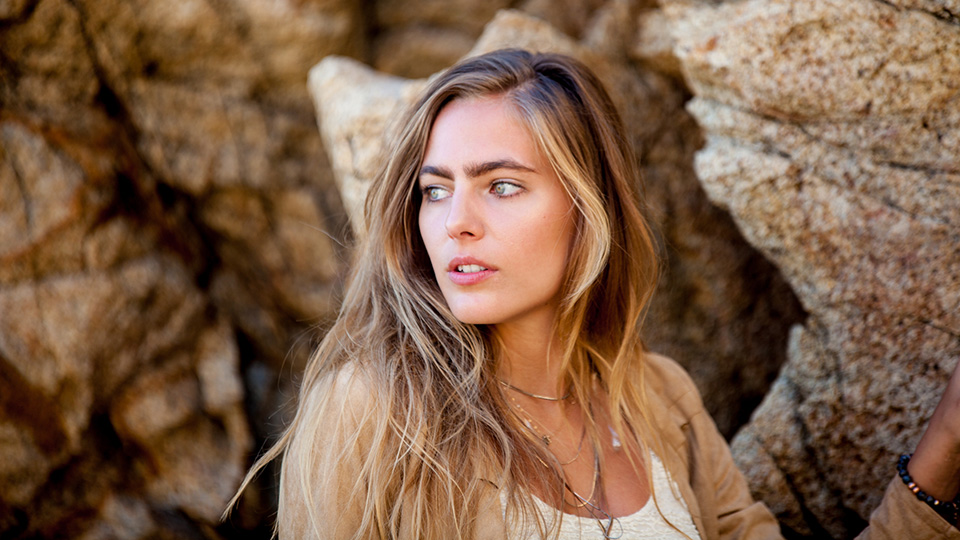 Since she made her UK debut at C2C: Country to Country back in March, Lauren Jenkins has gone from strength to strength. She released her acclaimed debut album, No Saint, earlier this year, and has performed at The Long Road festival, toured with Willie Nelson and made her Grand Ole Opry debut. This month she’s been out on a short European tour, finishing with her first sold-out headline show at The Grace in London.

After raising her glass to toast the cheering crowd, Jenkins opened her acoustic set with Twenty Years, which she dedicated to her friend Kylie Rae Harris who recently passed away. Right from the off her vocals had great depth and a fantastic husky, smoky tone, particularly on the song’s soaring chorus. You could tell her performance was really coming from the heart and she was visibly moved. Towards the end she asked the crowd to join her on singing You Are My Sunshine and they happily obliged, bursting into cheers and applause as she finished.

Throughout the show Jenkins performed songs from her album No Saint, as well as several covers including a folky spin on Bruce Springsteen’s I’m On Fire, where she hit some impressive high notes, and a 70s-influenced version of Dreams by Fleetwood Mac. For me the standout of these was her take on Robert Palmer’s Addicted To Love. It’s not necessarily a song you’d expect her to cover, but her stripped-back approach to the song gave it a sultry vibe and showed off the belt in her voice. She also played two new tracks – the rocky American Spirits, with rapid-fire verses and a smooth, laid-back chorus, and the detailed, honest It Ain’t Love Any More with its road trip imagery. Both songs sounded great and if this is the direction Jenkins’ music is taking, then I’m very intrigued to hear more.

One thing which particularly struck me about Jenkins’ performance was the sheer range of her vocals. Whether it was showing her soulful side on the carefree Cadillac, where she hit some huge notes, or breathy, sweet vocals on the fiery Give Up The Ghost, she really knows how to use her voice as an instrument. I also loved her guitar playing, particularly on the lively fan favourite Payday, the twangy, lighthearted All Good Things and My Bar, which was full of swagger, sass and biting lyrics and ended with a fantastic a capella section. Additionally she was warm and likeable throughout, frequently thanking the crowd, cracking self-deprecating jokes and bantering with audience members, as well as speaking very openly about the stories behind her songs and her experiences in the music industry.

However, Jenkins really shone in the slower numbers. Maker’s Mark And You was an early highlight, full of palpable regret and really showing off her skills as a songwriter, whilst No Saint featured breathy vocals and raw, honest lyrics. In another artist’s hands the song could have been too much, but Jenkins’ measured delivery made it incredibly powerful, particularly towards the end. The religious imagery of the lyrics really stood out too. Throughout the song the audience were singing with her and by the end she could be seen welling up as they burst into massive cheers.

Towards the end of her set, Jenkins asked the crowd for requests before performing Blood, which she introduced by speaking movingly about her family and younger sister. The touching song showed off the richness in her voice and she had great control throughout, as well as bringing out the sadness through the stark, vivid imagery of the lyrics. She followed that with Running Out Of Road. For me the song summed up everything about her performance. It had lush vocals, gorgeous tone and clarity and fantastic frank lyrics – ‘I’ve got a full tank of gas but my heart’s on empty’ being a particular highlight. As she drew the song to a close, she declared it the ‘best first sold-out show ever’ and the crowd roared their approval.

Overall Lauren Jenkins delivered a brilliant performance that showed just why UK audiences have taken her to their hearts. She had stunning vocals throughout, fantastic guitar playing, smart songwriting and excellent stage presence – all adding up to a great show. She frequently talked about how much she was enjoying the show and promised she would come back, and based on last night I’m hoping it won’t be too long before she returns to the UK and is playing to even bigger venues.