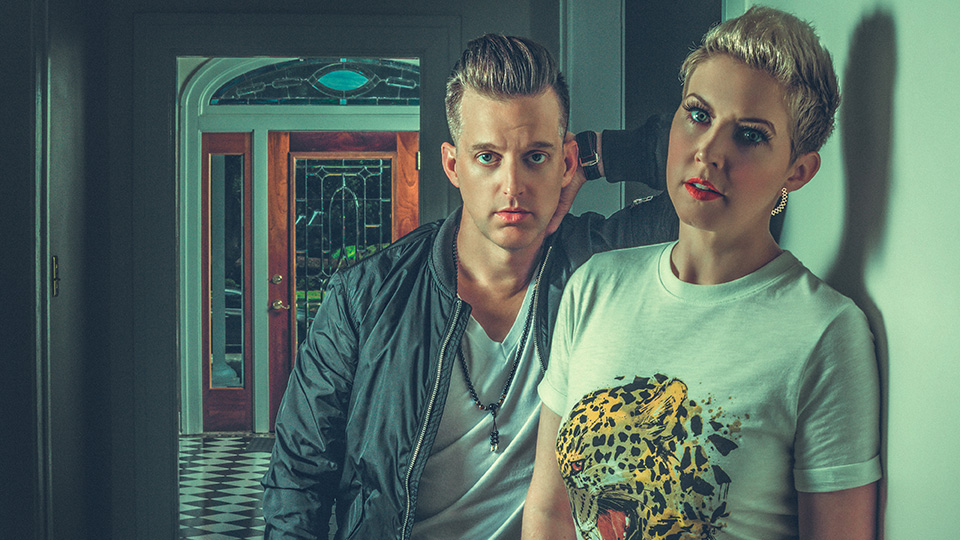 Since releasing their debut single Let’s Fight back in 2010, country duo Thompson Square – made up of husband and wife Keifer and Shawna – have become known for their outstanding harmonies and strong songwriting. They’ve had two chart-topping singles, Are You Gonna Kiss Me Or Not and If I Didn’t Have You, and released their third album Masterpiece independently last year. UK fans have been hoping they’ll come over here for a while now and at long last they made their London live debut last night at Bush Hall, opening for Eric Paslay on his Nice Guy Tour.

Keifer and Shawna opened their acoustic set with That’s So Me And You, from their second album Just Feels Good. Right from the off their vocals complemented each other perfectly, with the drawl and edge in Keifer’s voice giving a nice balance to Shawna’s depth and soulful sound. The gentle, emotional song built to a soaring chorus and both of them went for some huge notes, as well as getting a round of applause for dropping in a London reference. The audience burst into huge cheers as they finished the song and that set the tone for the next 45 minutes.

Throughout their set Keifer and Shawna performed songs from all three of their albums, including the playful Everything I Shouldn’t Be Thinking About – which gave Shawna the chance to show off the belt in her voice – and the twangy, sultry Up In Smoke, where Shawna’s smooth, sweet tones softened Keifer’s vocals. They also regularly encouraged the crowd to sing and clap along (not that they needed much persuasion!) as well as cracking jokes about being on the road, and came across as incredibly warm and engaging.

One thing which particularly struck me about Thompson Square’s performance was the incredible connection they have with each other. The rocky, high-energy I Got You was an early example of this, with the two of them looking into each other’s eyes and practically radiating intensity. It felt like they were the only two people in the world and completely drew me and the rest of the audience in. I also loved the sparse, lonesome feel of Glass, which showcased Shawna’s gorgeous vocals especially on the acapella ending, and the emotional Masterpiece which was full of affection and highlighted the gravel in Keifer’s voice really well.

For me one of the highlights of the set was Lean On Neon, taken from Shawna’s upcoming solo project which Keifer is producing. The song has a lovely, classic country feel and the lyrics are packed full of details, giving it a beautiful timeless quality. Shawna’s voice had the most incredible richness to it as she performed the song with great control, filling the room and making it feel much bigger. If I Didn’t Have You was another standout, with a very moving introduction from Shawna and an atmospheric, stripped-back approach that put her and Keifer’s vocals at the forefront. You could really tell the performance was coming from their hearts and the huge note at the end was just spectacular.

Thompson Square closed their set with Are You Gonna Kiss Me Or Not, arguably their signature song. I loved the storytelling and how the lyrics evolved over the course of the characters’ relationship, as well as the sense of light-heartedness about it all. Keifer and Shawna’s harmonies worked together brilliantly throughout and the crowd – who were clapping and singing along in full voice – roared their approval as the song ended.

Anticipation has been incredibly high for Thompson Square’s UK performances and based on last night it was definitely worth the wait. As well as their stunning harmonies, they had fantastic chemistry on stage and really brought out the emotion in every song they sang with conviction and passion. They’ve already promised they’ll come back to the UK and personally I can’t wait!