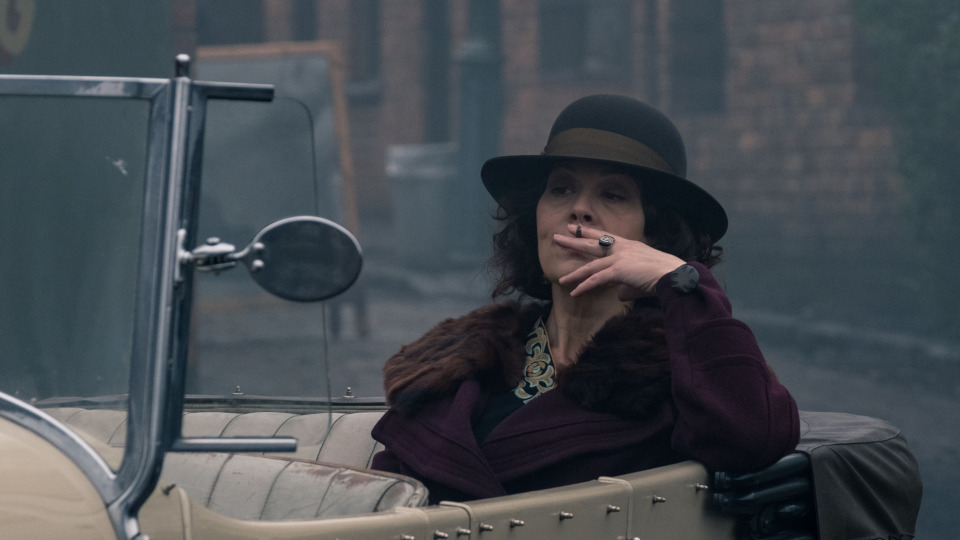 The opening scene of this episode of Peaky Blinders isn’t quite as insane as the previous two, there are no nuns being threatened or fields full of landmines. It is, however dark and sinister and shows Tommy (Cillian Murphy) in the throes of a nightmare where the ghost of Grace is asking him “happy or sad” This episode of Peaky Blinders puts a lot of emphasis on the mental state of both Tommy and Arthur (Paul Anderson).

As the episode starts proper we see Jimmy McCavern (Brian Gleeson) on a canal boat heading to a meeting with Tommy where they end up calling a truce so that they can carry out a mutually beneficial business deal. The meeting is full of bluster on the part of Jimmy but Tommy manages to keep cool as he tends to when it comes to business.

Back at the Shelby offices, Arthur and Finn (Harry Kirton) are attempting to expand their football match-fixing enterprise by trying to get access to the referees of the first division. They are leaning on Billy Grade (Emmett J Scanlan) to get them the information they need and you can clearly tell he’s not happy about it.

We next see Tommy holding court at the Garrison pub as his constituents come to air their grievances. During a heartfelt disclosure, we think we’re hearing about a potential murder. This is true of a sort only it turns out that the victims were actually songbirds. Tommy’s next visitor is a member of a Chinese gang who wants to enter into a deal with the Shelby’s. To ensure he has their attention, a girl is sent to see Finn and keeps him at gunpoint during the negotiations. The Chinese want the Shelby’s to help smuggle seven tonnes of opium out of the country.

Tommy meets with Arthur and Polly (Helen McCrory) to discuss the deal with the Chinese. Arthur is against it but Polly uses it as an opportunity to have Michael (Finn Cole) reinstated into the family business. In the end, both Tommy and Polly vote for the deal and preparations are made. Arthur is furious, not only at this but also how Tommy is using him to carry out trivial tasks.

At the Houses of Parliament, Tommy meets with Aberama Gold (Aidan Gillen). Tommy makes it clear that Aberama needs to put his vengeance on Jimmy McCavern on hold whilst they carry out their business. Clearly Aberama is not best pleased, that is until Tommy promises that Polly will marry him if he remains patient. Aberama will have to propose in the traditional way, though.

Tommy’s next meeting is with Oswald Mosley (Sam Claflin) where they attempt to scare each other by revealing the dirt they have on each other. It turns out that Oswald slept with Lizzie (Natasha O’Keeffe), Tommy’s wife when she used to be a prostitute. Mosley is invited to attend a party at the Shelby mansion.

The stress of the exchange clearly gets to Tommy who has another vision of Grace and in the next scene, we see him standing atop a bridge seemingly thinking about suicide.

Polly manages to convince Michael that re-entering the family as the head of the smuggling operation via the canals is a good idea. She really knows how to push his buttons and the sheer amount of money he could make from the enterprise is enough to convince him.

In the next scene, we learn more about the deal between Tommy and Jimmy McCavern. It seems that Tommy wants to skim from the Chinese opium shipment and sell it via the Billy Boys.

At the party in the Shelby household, Tommy manages to get Oswald to sign as a guarantor for a cheque to cover payment from the Billy Boys. Tommy now has evidence that Oswald is involved in criminal activity but we don’t get to see how far this develops in this episode. At the party, there is an exchange between Oswald and Lizzie in which Lizzie is most definitely the winner.

As a final scene, there have been fewer with more drama than what we saw tonight. The scene jumps between the ballet of Swan Lake that is being performed at the party and a car racing towards the house. Unexpectedly, Linda Shelby (Kate Phillips) gets out of the car and is met by Arthur who is begging for forgiveness. Linda doesn’t want to hear it and pulls a gun on him. After a heated exchange, a shot is fired but it isn’t Linda who pulled the trigger. It was, in fact, Polly who fired the shot and she has seemingly killed Linda.

Another thrilling episode of Peaky Blinders which seems to be starting so many subplots I’ve no idea how they are going to manage to get them all to play out in just one series. Roll on next week’s episode.

Peaky Blinders continues on BBC One on Sunday 15th September at 9pm.