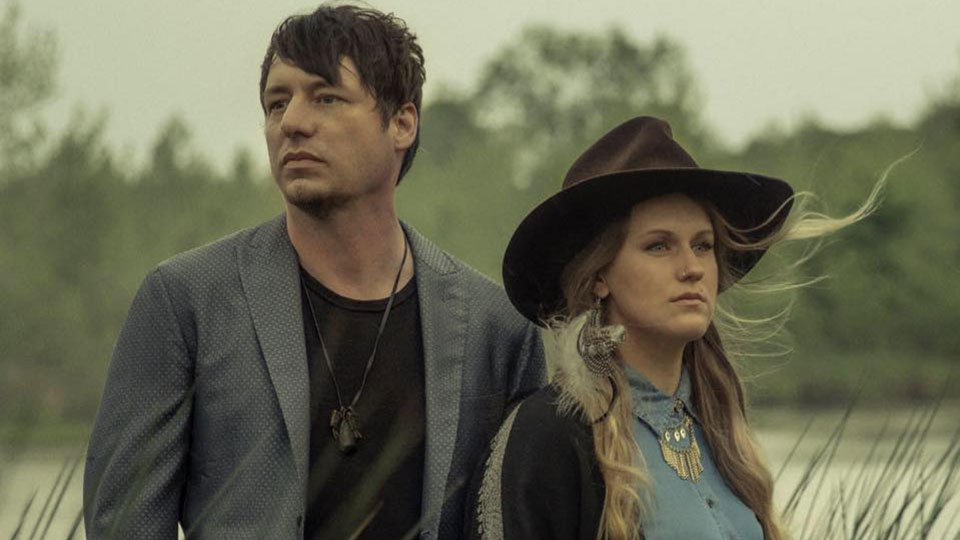 American Young – made up of Kristy Osmusson and Jon Stone – have rapidly become one of the most beloved live bands on the UK country scene.

Since releasing their debut album, AY, back in 2016, they’ve become a fixture at festivals such as Buckle & Boots and Country to Country. Now they’re back with their latest EP, Soundtrack Of Your Life, ahead of a short tour taking in London, Manchester and Millport Festival in Scotland.

I recently caught up with Kristy and Jon to talk about the EP and tour, their approach to songwriting and what it is that keeps them coming back here.

Last time we spoke was just over a year ago – what have been your highlights since then?

Jon: Well, touring. We toured quite a bit and we have headlined a few things that have been pretty cool. We recorded new music in the last 12 months. Stuff like that, I guess.

You’re coming back to the UK for a few dates this week. For people who haven’t seen you before, what can they expect from those shows?

Jon: Well, we’ve got a UK band that we’re playing with now over there. We’re gonna share some new music that we’ve been recording. We have a new show entirely. I’m gonna bring a different guitar [laughs].

Is that something that’s important to you in terms of keeping the live show fresh – both for the audience and yourselves?

Kristy: I think it’s what’s kept us playing music for as long as we have. It’s important to constantly rework the existing material we put out, but then also incorporating this new stuff that we just put out. It has to be fresh and it has to be interesting. We have to enjoy it first, and it always comes with keeping us on our toes.

You’ve just released your latest EP. Can you tell us a bit more about that?

Kristy: Well the latest song is called Soundtrack Of Your Life. We were just talking about what the purpose of music in our lives [is], and I just had a baby and it’s been really powerful to experience the why of what we’re doing. It brings a whole new depth and level to what we’re saying for me. I think it’s really important for me. And we’re excited to share it with everybody.

Why did you choose that as the title track of the EP?

Kristy: Well it came from wanting your songs to be part of that soundtrack of your life. You know, it’s interesting – so I was going through labour and I made a push playlist, and all of a sudden I started realising the true power of music and how it can bring back situations. There’s ups and downs in life and I think that is kind of what music does. It is a collection of songs from our first prom to the first song that we hear when we first get in the car, and your first kiss and all these different experiences that really do make up the soundtrack of your life. And I think there’s a gift and a responsibility in that.

One thing which stood out to me about your new songs was the range of different sounds and styles they cover. Was that something you wanted to do before you started the process of making this EP?

Jon: Well I think it was a conscious decision. We don’t wanna make music that sounds the same. Every song is an opportunity. Every time we write, every time we record it’s an opportunity to create something unique and empowering and identifiable to us. So I think that that’s all conscious.

Jon: I mean we really don’t think about it like that. None of the songs were very difficult. It just takes time and attention to what the song needs or what the song’s calling for, and whether this is the moment to say the right thing or if we should record it differently.

You’ve already been over to the UK this year for Buckle & Boots Festival – how did you find that?

Kristy: It’s amazing – always such a cool time. And we’ve played it enough now where we know so many people. I saw from stage this couple meet a year or two ago at the first festival, and I saw their eyes meet from the stage, and I felt these crazy sparks fly and I was like, ‘oh man, that could be something!’ And then they got married and they got pregnant, and I brought my stethoscope and I got to hear the heartbeat of the baby for the first time at the festival. It was so amazing. We had our first little festival baby. They met during the song, and it was such a special and powerful moment. He’s been delivered and he is adorable, and I’m so excited we’re gonna get to meet him when we get over there.

But it’s fun to be a part of everybody’s lives. And I have kids over there that we’ve become friends with, and we get to watch them grow up and watch them go through school and live vicariously in their learning of different instruments that they’re taking lessons and learning. And we get to see couples that we’ve known for a long time and watch them participate in their lives and celebrate the highs and lows. Because festivals are a time when everyone connects and just relaxes and enjoys themselves. A festival is your chance to step out of your everyday grind. And Buckle and Boots is so great like that because it’s out in the country, it’s beautiful, and you get to hit a restart on life. So we’ve just made some great relationships over there and it’s really fun to be able to see everybody. We love how they’ve responded to the new music so that’s exciting. We made the second ballot of the BCMAs so that’s really, really exciting. We found that out yesterday. But that’s fun and we’ve made such great friends over there. You guys definitely have quality people.

Has there been anything surprising about people’s reactions to the new music? Have they responded to certain songs in a way you didn’t expect?

Kristy: I have been surprised with the stories that came out from Soundtrack – the different songs that people will come up with. I actually played it at my high school reunion, and it was really striking because everyone was coming up and saying the songs from our senior class and how that carried so much of the memories. Like our songs from prom and our songs from graduation. It was really neat to be able to experience my reunion through that song. So that’s been awesome.

I saw the video of you playing Soundtrack Of Your Life with the Houston Middle School Band – how did that come about?

Kristy: So CMA, the Country Music Association, gives a lot of money away in grants and scholarships to music education here in the United States. Federal funding has been cut for the arts in a crazy, crazy, drastic way over here. So we have to do private fundraising and rely on amazing volunteers and the musicians and artists to step in and raise money to keep programmes running. And the CMA is the largest contributor to music education in America.

So there’s a non-profit called the CMA Foundation, and it’s a really incredible part of the CMAs. They give away scholarships and grants to applicants of music teachers around the country, and we were invited to this recipient dinner where a bunch of applicants were receiving their scholarships for their school. And the cool thing that I found was different ones you can apply for. One of them that the teacher had applied for was for the school, and the other one they gave him some personal money so he could take his wife on vacation, because Lord knows every music teacher deserves a holiday in the summertime. And his wife had just had a baby so they were taking their first family trip ever.

Anyway, so we were sitting at this table with the music teacher from Houston Middle School, and he was receiving his grant and scholarship. He was telling us what he was gonna do with it, how it was gonna boost his middle school band and the instruments he wanted to get and how he wanted to supplement his programme. And I was like, ‘oh my gosh, we have to come and play with you guys or sing a song with you guys’. And I thought they would wanna do a song they knew and he was like, ‘no, send me something over!’ So we did, and we had a week before school was out of session, so we got to hang out with them on their very last day of eighth grade, which is in our country and I think in yours if I’m not mistaken it goes into high school. Eighth grade is where you get to have your first kind of graduation.

So it was really exciting. The local news was there and the kids did such a great job. They learned the song so well. I’d been thinking back after that experience to my education, and I’m from a tiny little town in Idaho but I’d never met someone that had been a professional musician all through school. I didn’t know that that was an option. And so I was really glad to be able to share a little bit of our experiences with these students and let them ask questions, and they got to ask our drummer and our bass player all about the instruments and what they’re playing on and how they learned to play, what got them into it. I could tell it was a really memorable experience for all of us, so we hope to carry that through and hopefully in England come to visit some of your schools, because I would love to see how y’all do it in your music education. To me that’s the most important gift you can give a kid. It’s teaching them a universal language immediately. So it would be fun to visit your schools.

Kristy: Yeah, Jon is on a show called Very Cavallari so he’s filming that. I think it’s coming over to Europe. And then we have touring and the EP comes out so we’ll be doing a support tour for that, and then working on finishing up the album. We hope to have the full album come out in a few months. But we’re just in the studio constantly, getting inspired.

Can you tell us anything about the album?

American Young’s new EP, Soundtrack Of Your Life, is out now.

See American Young live in the UK this summer: