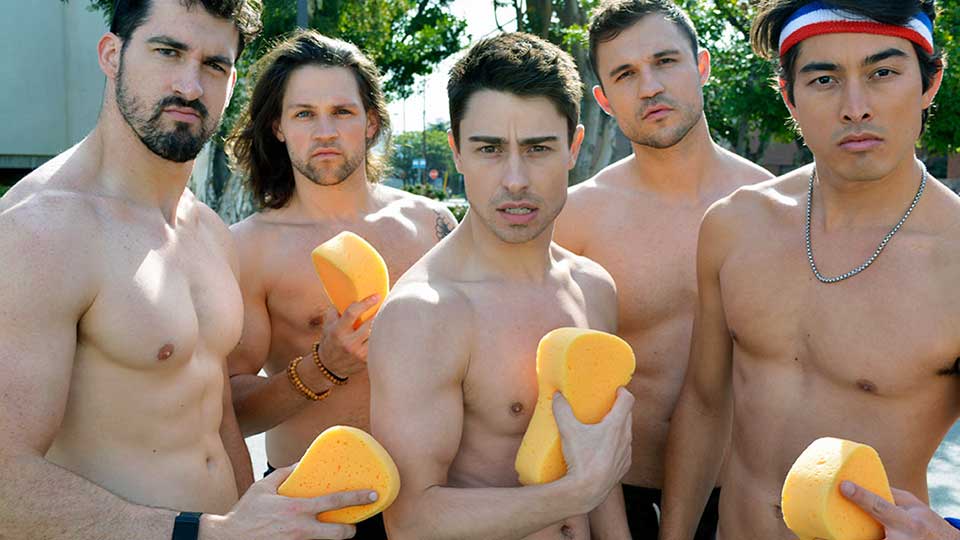 Many viewers will have seen the hit web series Steam Room Stories on YouTube. Hot guys in towels talk to one another in delicious double entendres as they relax after a session at the gym. As the ever-popular series has ably demonstrated, there’s no shortage of ideas for short, punchy sketches – but how do you expand a comedy concept about sexy half-naked men into full-on movie length?

It turns out you just need a good concept to hang it on, and several more good ideas after that to flesh it out and give it some girth, so to speak. Steam Room Stories The Movie tells a cracking, if delightfully far-fetched story, and features many fan favourite and predominantly shirtless actors including Jacob Buckenmyer as Wade, Paris Dylan as Beau, Chris Boudreaux as Balton, Isaiah Lucas as Ryan and Forrest Hoffman as Tad.

It turns out that Old Man Johnson who runs the gym forgot to pay his taxes back in 1985, and now the men in grey suits have come to collect $25,000, or the gym closes. Not only that, but mad, maverick and completely self-obsessed cosmetics magnate Sally Fay (Traci Lords) has traced the fountain of eternal youth to… yes, you guessed it, the very same gym in Encino. Imagine what adding it to the beauty products would do for her profit margins!

As the boys are pumped up to raise the bucks and save the gym, Sally Fay sends her cute, boy-next-door assistant Neil (Eric D’Agostino) on an espionage mission to infiltrate the gang of bros at the gym and ensure their efforts are thwarted. When Neil and Wade fall for each other, there’s a conflict of interests, leading Neil to agonise over where his loyalties lie.

There’s a lot of fun along the way as the boys try a variety of entreprenurial schemes to raise the moolah and save the gym from closure. None are especially successful, as the boys’ passion and energy knock up against the brick wall of reality. There’s plenty of time for slow-motion shots at a shirtless car wash, though this is balanced out by a lack of restraint at a cookie bake sale (look away if you’re grossed out by messy eating!) It all culminates at a make-or-break contest at celebrated WeHo landmark Fubar, but you’ll need to watch the movie for more on that.

Steam Room Stories The Movie does exactly what you’d hope from getting to know and love the characters in the web series. It doesn’t take itself at all seriously, and is repeatedly self-referential, allowing the audience in on laughing at its own absurdities, or at the familiar tropes of movie-making. The dialogue is cheeky and fun, and had us laughing out loud throughout. It’s a movie that’s sure to put a smile on your face and a spring in your step. It’s so feel-good it’s impossible not to love it.

Everyone will have their favourite out of the wholesome steam room chaps, but there is plenty of hot young eye candy to choose from for the discerning gent, as well as the additional flash of well-toned buttocks that look mighty fine up on the big screen. All of the characters have their own voice and are given moments to shine. Our favourite is when we see stifling romantic Wade’s montage of disastrous dates. It makes him so endearing!

Out of the other performances, Traci Lords is everything you’d want her to be: pouting, manipulative, and happy to go over the top (though there is a hint of vulnerability that leaves her sympathetic). She’s hugely entertaining in every scene. Though the moments where Fay isn’t quite herself do leave you realising how hard an act Lords is to follow – and wanting more!

Overall though, there are plenty of laughs to be had in this upbeat, big-hearted and ultimately, rather sweet comedy about the true meaning of love, friendship and loyalty. The fast pace and witty dialogue carry it from start to finish. If we started wondering if a sketch show could be stretched into a feature, then Steam Room Stories The Movie rises to that challenge. It leaves us pondering, what more adventures can there be for these sexy loveable boys?

US fans can catch Steam Room Stories The Movie on the big screen on 31st August at the Castro Theatre, San Francisco. You can order the film on iTunes or check it out on the Steam Room Stories website. Let the trailer below whet your whistle.