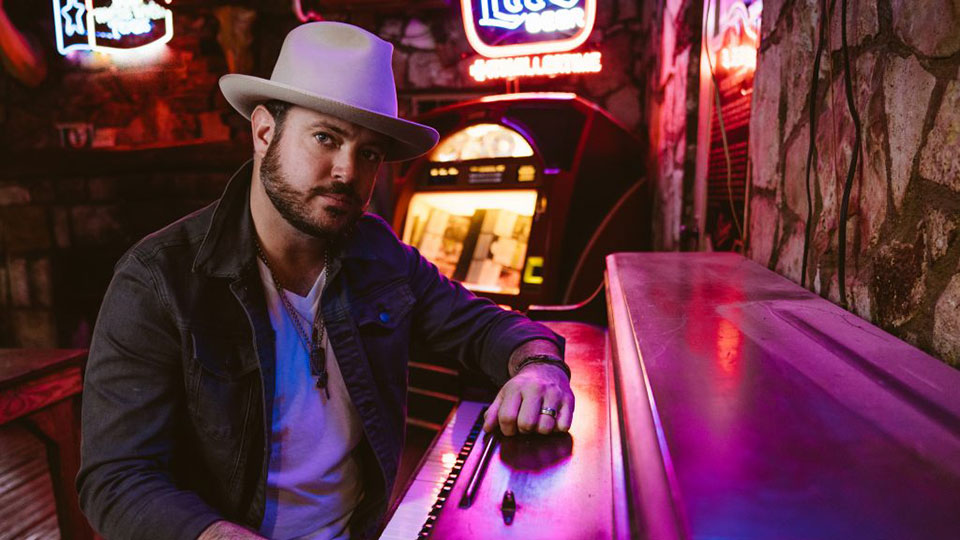 Wade Bowen was in the UK recently for a headline tour in support of his latest album Solid Ground.

I caught him at The Borderline mid-way through the run and he was excited to get back out on stage in front of UK audiences following vocal cord problems that almost left him unable to perform again.

Before his show, I sat down with Wade to talk about the reception Solid Ground has had, discuss his return to the UK and find out about his upcoming Christmas album…

We last spoke just before the release of Solid Ground. What’s the reaction to the record been like?

It’s been great. We had so much go on right when we released the album – we released in February of last year and my voice went down at the end of March. The critical time (when we should have gone to) work it and play it and then let people buy it as they hear it, we had to cancel three months of shows. I felt like it really affected the album release overall and it really hurt it so we’ve just been trying to play catch up ever since.

You were here earlier in the year to play some shows. How have you found UK fans compared to other audiences around the world that you’ve played to?

Very respectful. Very sweet. They love music, they truly, truly love music and are respectful of the art of music so it makes for interesting shows. It took me a while to get used to that. In my career when I’ve played with other people in the States and wherever, it’s so much about either the party or other things that are going on at the time. It’s a different show that I really enjoy doing.

I think some artists find it quite amazing when they come to the UK and they get quite a quiet receptive audience because they out and think, ‘are you enjoying this?’

I always think as a songwriter you must appreciate audiences that are actually listening to lyrics and taking the time to understand the stories. Have you found that people react to some deeper cuts over here that you didn’t expect them to?

Yeah. We actually just experienced that in France two days ago. I have a song called Day of the Dead on the Solid Ground record and this lady came up to me at the press conference and said, ‘It’s the number one line dancing song over here’ and I didn’t really know what to think. I didn’t really understand what she meant. We weren’t gonna play it on the show. Who would think a Spanish Tejano sounding song would be popular, even here or in France. It wasn’t on my initial list but we put in the show and it was two dance floors full of people packed up line dancing, having fun and singing along to every word. There’s been a few of those that you’re just like, ‘how in the world do you know that song or why do you like that song here?’ It’s pretty fun. I love it.

Well there’s an unexpected career achievement for you. You’re now able to say that one of your songs in a big line-dancing hit in France…

(laughs) I love that! Is that even a thing? I have a line dancing hit!

Isn’t that something that every Country singer aspires to have?

Hey, as long as they’re listening and paying attention and loving the music, however they want to dance or sing to it is totally fine with me.

Solid Ground is such a strong record and I’ve spent a lot of time listening to it since it came out. For you as the artist, are you over the record by the time you release it or do you get excited to see how people are going to react?

It’s a little of both. It does take so long sometimes for an album to come out. I’ve got an album out now that I’m done and I kind of put it away and forgotten about it. It’s weird and it’s not even out yet so it happens. When it comes out and you’re out playing it and working it there’s a whole new life to it because it brings life into your show as well. We go out and play so many shows so it breathes life into it as a band, and with this record more than any record I’ve ever had, we really felt like this record fit our live show better than any record I’ve ever done. We had to fight every night not to play every damn song on the record because we love playing it never fit. We fought with that a little bit because in our popular areas where we play, they want to hear the songs that they know. They don’t want to hear the new stuff so you fight that every time you release a song… ‘How are we going to work this into the old stuff?’ As you go further in your career it gets tougher and tougher every album to figure out how to do that.

It feels like the kind of album that you could mark with a 10th anniversary tour where you play the record in its entirety. Is that something that might interest you down the line?

Yeah I’ve thought about that with some of the albums that I’ve done in the past. Surprisingly one of the early records of mine called Lost Hotel is a really popular record still and I’ve debated doing that. It was 2006 when that record came out so we debated that in 2016 and then we pushed aside because of some other stuff. Maybe someday… 2026… who knows? But definitely it crosses my mind playing some of these records from start to finish. When we released Solid Ground there were a few release parties we had where we played it from start to finish and that was really fun.

Albums in this genre tend to still tell a story from start to finish whereas other genres are a collection of random tracks. Solid Ground is sequenced so well so does that make it harder to pick single tracks from it to perform?

Yeah for a lot of reasons. Like I said before fitting in the old stuff. We don’t necessarily have radio hits that we know are gonna be the popular ones when we put them out there and go play them live. We have to define that and pick and choose what we think are gonna be the songs that we want to sing maybe forever so we kind of pick and choose those based off the albums as we’re starting to put together a show. But that’s not always right. You have no clue what people are gonna love and what they’re not. If we knew that music would be easy right?

Thanks! Yeah well me too especially after last year. Not being able to be here really, really hurt. It really stung pretty bad. I’m just keeping my fingers crossed that nobody gave up on us and we’re able to start back building crowd and building some fans here. That’s the whole goal. It’s definitely not financially beneficial to be here. I just love it. I love coming back and our goal righjt now is once a year and I’m hoping we get to twice a year, maybe more, because I really truly believe there’s something special about playing over here.

The financial side is something we hear a lot but we’ve seen artists, like yourself, that have come over here and made the loss, return to bigger and bigger crowds. We appreciate that you put in the time and effort so we make sure we show up for you every time. Hopefully that will build and build for you…

Hopefully. Believe me I’m happy to do it. Thanks for the opportunity to come on stage.

You mentioned new music. Did you say you have an album already done?

Yeah I did another record with Randy Rogers. We had a Hold My Beer Volume 1 and we just finished up Volume 2 which will be out sometime next year. I actually just finished up a Christmas record for the first time in my career, which was a lot of fun. I included my kids on some tracks and some buddies. It’s a cool record. I guess we can talk more about that when it gets closer but it’s really fun. I’ve never done a Christmas album so after last year I’m like, ‘what the heck am I waiting on? Let’s just do what I want!’ There was a time when I wasn’t sure if I’d ever get to sing again. It was pretty scary so now that I’m back I’m trying not to take anything for granted.

I’m really proud of it. It’s really cool. I’ve tried to make a timeless sounding record. Traditionally timeless if that makes any sense? A kind of throwback sounding record, which I’m really proud of. Instead of just making a normal record, I can’t ever settle for that, I have to figure a way to be weird or something you know (laughs). Stretch the boundaries a little bit.

Is there anything else you’ll be able to pack in this year?

I’m finished up that stuff and still finishing up the Christmas project so I’m working on that and then touring the last last half of the year. I’m going to the West Coast of the States, which is a pretty good destination area for us. I really love playing out there. That’s a pretty good run that we have scheduled. Other than that we’ll just be around our normal region and working our butts off playing as much as possible.

Then hopefully we’ll see you back here next year….

Wade Bowen’s latest album Solid Ground is available now. Watch the video for Fell in Love on Whiskey below: