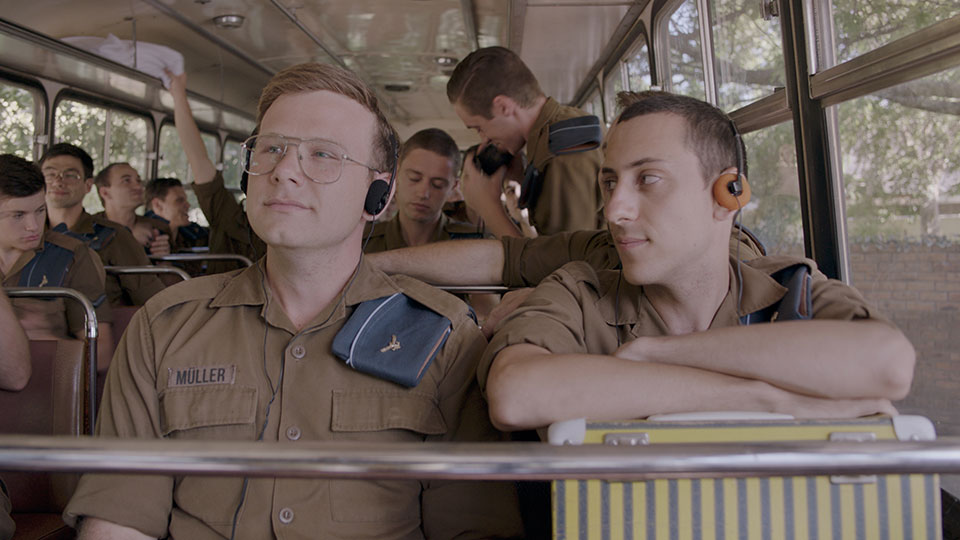 18-year-old Johan Niemand (Schalk Bezuidenhout) is drafted into the military during the 1980s in South Africa. He lands a place in the South African Defence Force Choir, where he becomes a ‘Canary’, the term for a singer within the choir, and embarks on a journey of self-discovery. With a love for 80s music, Johan struggles with his sexuality and his confusion is compounded further when he meets fellow Canary Wolfgang (Hannes Otto), who he slowly starts to fall for. As he battles his feelings, Johan takes in the atmosphere of discrimination he finds himself in and hits a difficult spiral.

Kanarie is a coming-of-age film set in South Africa and it tries to do something refreshing with the well-worn LGBT cinema trope. The film opens with a performance from Johan, dressed as Boy George and embracing his love for all things camp and 80s. His flamboyancy is soon packed away when he joins the military and he’s shocked when he realises just how homophobic and prejudice many of his new colleagues are. Not understanding that he himself is gay, Johan goes on a difficult and at times heartbreaking journey.

At the centre of the film is Johan’s relationship with Wolfgang, a young man who is much surer of himself than Johan is. Their friendship turns into flirting but when it starts to move to sex, Johan shuts down and can’t bring himself to follow through with his urges. This part of the film, while moving, has been done many times in gay cinema and a little disappointingly, it doesn’t offer anything particularly new. You can see the plot turns coming, which leaves you a little passive as a viewer.

What Kanarie does do well is balance comedy with the more serious subject matter. The film has many lighter moments and some that will make you laugh out loud. It’s a welcome breath of levity in a film that gets gradually darker and more painful. The boisterous 80s soundtrack helps too and there are plenty of classics packed in over the two-hour duration.

Schalk Bezuidenhout gives a strong central performance and you do feel sympathy for him. He’s match by Hannes Otto’s turn as the adorable puppy dog-like Wolfgang, who could be the key to John becoming his authentic self. They are believable as a couple too, fostering strong chemistry and giving the film a little bit of sizzle in all the right places.

Kanarie is an enjoyable film. While it may not be ground-breaking, it gives you a layered story with strong performances. The soundtrack lifts things and there are plenty of laughs to be found. By the end you’ll feel it tugging on your heartstrings and you may even be left feeling a little warm and fuzzy. There’s a lot of heart packed in and for that alone, you should give Kanarie your time.