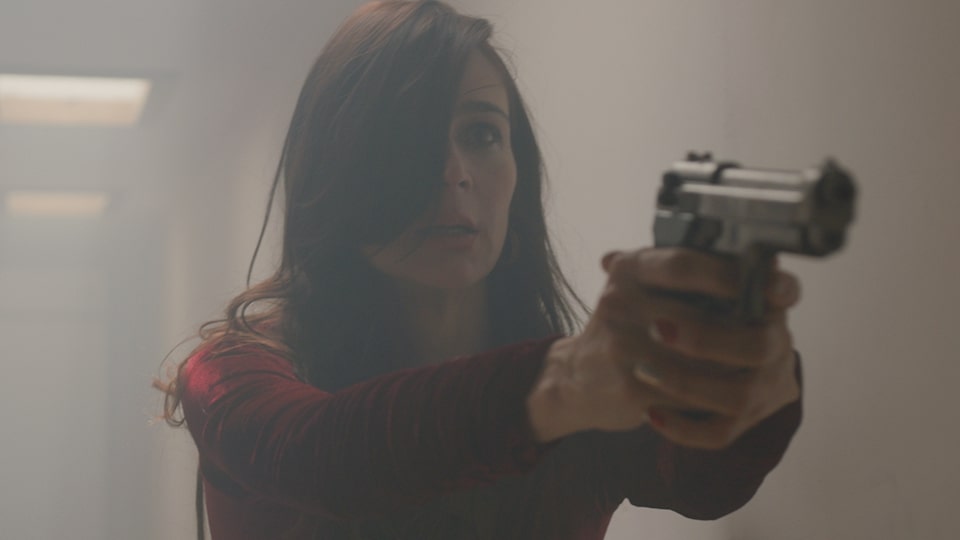 The debut film from Ecuadorian filmmaker Gabriela Calvache, The Longest Night is a supremely confident piece of work, dealing with extremely difficult subject matter in a way that is both sensitive and rightfully harrowing. The film is making its UK premiere at EIFF as part of the World Perspectives strand. Featuring a terrific central performance, and an absolute gut-punch of an ending, this under the radar drama is well worth seeking out.

The Longest Night tells the story of Dana (Nöelle Schönwald), a high-class escort to various white-collar clients, whom she meets in a nice hotel. She initially seems like a woman with her own agency, with freedom and control over her life. But after she is attacked and beaten up by a gangster, the full picture of Dana’s circumstances begins to emerge.

Addicted to prescription opioids, and trying to provide for an ill daughter, Dana is in debt to crime boss Nelson (Jaime Tamariz), who is the owner of ‘La Mala Noche’, a local brothel. The brothel however is merely a front for a sex-trafficking ring. When her payments to Nelson start coming in late, her daughter’s life is threatened.

Calvache’s script is tackling huge subjects here – modern slavery, sex-trafficking, the opioid crisis – from both a socio-economic and environmental standpoint. The film takes place in the aftermath of an earthquake, and it seems almost a throwaway detail at first, but it underpins everything. Displaced children, separated from their parents, or orphaned during the quake are scooped up by Nelson’s gang. Easy pickings for the trade.

But the film isn’t a furious polemic about these societal ills. Instead Calvache filters her thematic concerns through the eyes of Dana. This is her experience. It keeps the film focused, and more impactful when it changes gear into a tense thriller in the third act.

The Longest Night is by no means an easy watch, dealing as it does with such tough subject matter. And anyone who is even slightly squeamish about syringes will have a hard time with this film. But Calvache and cinematographer Gris Jordana ensure that despite the hard-hitting material, The Longest Night is a visual treat. Filmed in distinctive styles, merging gritty hyper-realism with hypnotic dream-like images, the film looks beautiful.

At the heart of it all is Nöelle Schönwald, who delivers an incredibly powerful and affecting performance as Dana. Completely real, utterly believable, and above all else, sympathetic. From the moment we meet her, as she sashays down the hotel corridor, pausing at the door of her next client to steel herself, and then putting on her game face the moment it is opened, you will be captivated by her. She is brilliant.

When the final credits roll, Calvache widens the scope from Dana’s POV and presents us with the shocking real-life statistics associated with human trafficking. It’s a sobering note to leave with the viewer, but a powerful message to end on. This is a really promising debut. I hope this film finds an audience, and we see more from Gabriela Calveche in the future.