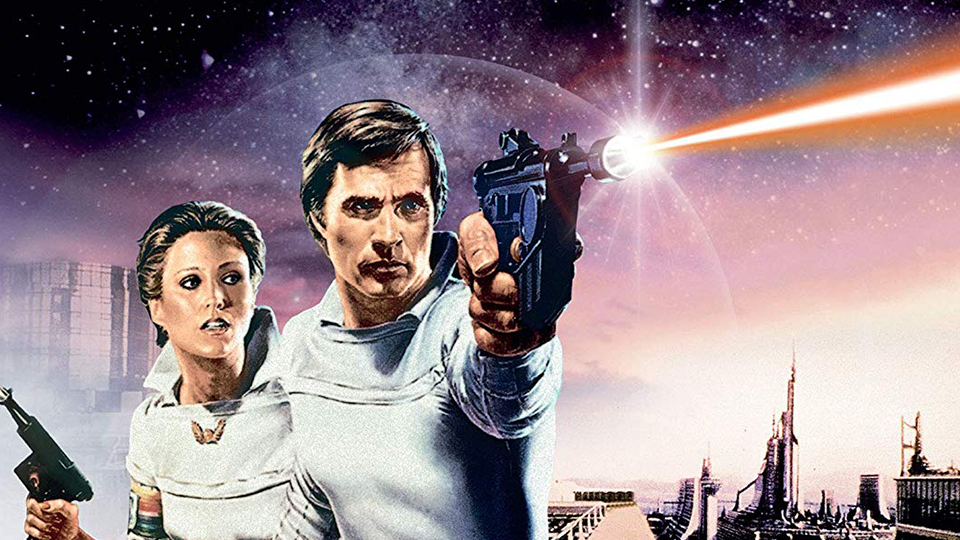 Buck Rogers in the 25th Century burst onto television screens in 1980 and cashed in on the enormous success of Star Wars and Battlestar Galactica (from which it borrowed many design elements), offering high-budget and big concept glamour to science-fiction fans in the US and worldwide.

Gil Gerard plays Buck Rogers, an astronaut sent into space in 1987, only to be frozen in suspended animation for half a millennium before falling back to earth in the late 25th Century. A daft, if intriguing premise allows for a relatable hero to be our guide through the humanity of our future. In this way, like all great science-fiction, the stories hold up a mirror to modern society and explore contemporary concerns.

The show is terrific fun, and well ahead of its time. Gil Gerard is perfectly cast as Buck Rogers. He’s strong, handsomely-chiselled and brave, but also has an endearingly goofy quality, with a disarming manner, long before geeks were allowed to be heroic. There are also strong roles for women. Erin Gray plays Colonel Wilma Deering, a leading pilot in Earth Defense (American spelling), who is Buck’s main ally and will-they-won’t-they? sparring partner. There’s also a recurring female villain in Princess Ardala, played by Pamela Hensley. Actors from ethnic minorities abound throughout each episode, and the depiction of earth’s future is fairly accurate – more multicultural but also more sterile and humourless.

Mel Blanc, the voice of many great Warner Brothers cartoon characters, lends his talents to Twiki, the diminutive robot who is the mildly embarrassing draw for young children. Thankfully, his expanding vocabulary as he learns slang from Buck, and his rather schizophrenic relationship with Dr. Theopolis (well, watch it and all will become clear…) offer some much-needed laugh-out-loud moments of levity.

The pilot episode, presented here in feature length 100-minute format, is a very strong introduction to the series. Buck Rogers is hauled aboard a Draconian spaceship which orbits the earth at a time when an uneasy truce exists between their race and humans. He is unwittingly used as a pawn between the warring species, until he asserts his identity and takes charge of his own destiny. It quickly establishes that, although more technologically advanced, life on earth is far from idyllic in the future, and New Chicago has been built in place of the old city, which was destroyed by nuclear war not long after Buck Rogers’ time. Outside the city is nothing but wasteland, inhabited by mutants. Since the Cold War still had a decade to run when the series was made, it would have preyed on contemporary fears of nuclear fallout (though how on earth does Buck Rogers know how to find the graves of the family members who were still alive when he left for space?)

The design of Buck Rogers in the 25th Century is a triumph. New Chicago is futuristic, but rather cold and austere. This contrasts nicely with the Draconians, who have an ‘eastern’ look inspired by Ancient Persia, where the women are scantily clad, and it’s all rather sultry, seductive and even a little seedy. To balance up the eye candy, producers find plenty of excuses to get Buck Rogers shirtless as often as possible, and there are tight, figure-hugging costumes for both sexes. This series really does have something for everybody!

Another sumptuous aesthetic element is the incredible model work. The attention to detail on the spaceships, and the marriage of design between the sets and the models is commendable, lending the series a cinematic quality, boosted by the fact that it’s shot entirely on film. All of it has been brushed up and dazzlingly restored to high definition for viewers of the 21st Century.

Although the science-fiction influences on Buck Rogers in the 25th Century are obvious, it’s worth also saying that the concept pays tribute to James Bond, especially in the first season. Rogers is, after all, a man out of time, who has no past, no records, no official documents – quite a useful asset as a spy for Earth Defense!

The main problem with Buck Rogers in the 25th Century is that it does, unfortunately, run out of steam. The first season is much stronger than the second. With viewing figures falling off towards the end of its run, there’s sadly no satisfying conclusion. It rounds out with a standalone episode just like any other. This is a shame, as the second season has a few things working in its favour, such as the casting of Wilfrid Hyde-White (Colonel Pickering in 1964’s My Fair Lady), a sweet and charming old character actor. There’s also Thom Christopher as Hawk (a character later shamelessly ripped off by the phenomenally clever Rick and Morty animated series). But the action has been shunted from earth and into space, and the storylines fairly quickly become uninspired.

So who won the battle of the sci-fi giants? Well, Buck Rogers in the 25th Century blasted Doctor Who out of the water for its special effects and cinematic production values, rivalling it with a high concept and charismatic lead actor, but it fizzled out after only thirty-three episodes over two years. Doctor Who was always less glamorous but ran for twenty-six years. Steady and slow wins the race?

Although it wasn’t around for long, flash-in-the-pan Buck Rogers in the 25th Century deserves plaudits for its high production values, prescient storytelling and fine performances. Revisiting it now is, the odd run-of-the-mill episode excluded, a real pleasure. A short life, but one that burned brightly. Buck Rogers in the 25th Century is available now from Fabulous Films.