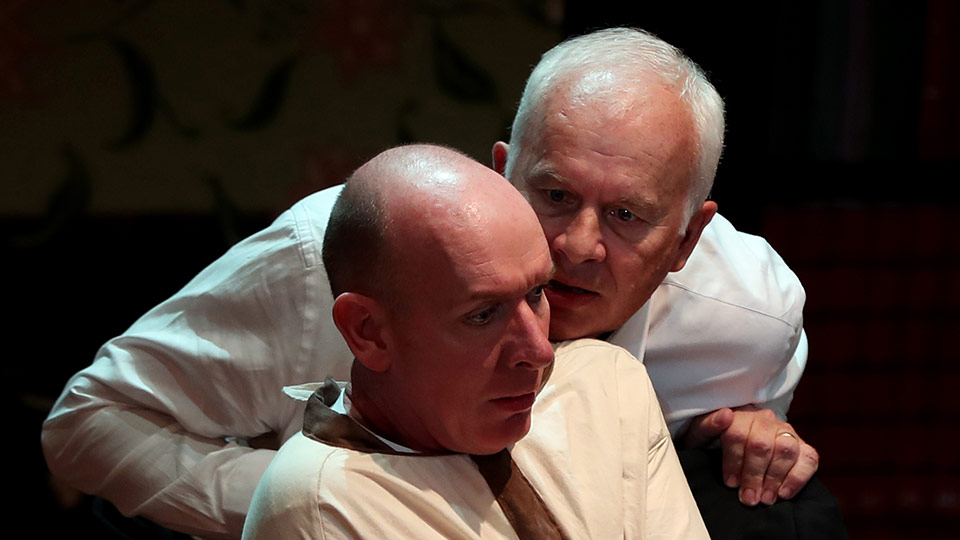 Mindgame is a fascinating play from the pen of the prolific and talented writer Anthony Horowitz, who is best-known as a novelist, but is no slouch when it comes to writing for the stage. Mindgame does what the title suggests, and provides an entertaining evening of unsettling and provocative psychological drama.

We open with a blast of Pink Floyd’s Dark Side of the Moon. What was the central theme of that album again? Oh yes, sanity versus madness. Welcome to the asylum.

Mark Styler (Andrew Ryan) is a writer with a string of hit (if sensationalist) true crime books behind him. He’s settled on the subject matter for his next title: a serial killer known as Easterman who is being detained at a high-security institute for the criminally insane. What he did to his victims was terrible, inhuman, but Styler wants to come to understand the monster, and asks to interview Easterman, or at the very least, his psychiatrist Dr. Farquhar (Michael Sherwin).

After a long journey, Styler finds himself in a madhouse in more ways than one. Why is Dr Farquhar at first unwilling to speak to him? Why is security worryingly lax? Why is such a well-funded institution running with just skeleton staff? And what exactly is in the sandwiches they serve?

Mindgame is a terrific piece of psychological drama that plays on some of our darkest fears. What does it mean to be sane? Or insane? How do we know the difference? How can we prove our sanity to anyone? How do we even know what’s real? Horowitz, whilst offering the audience a play with plenty of bite, has a fair bit of fun unpacking these themes too, leaving Mindgame as witty as it is chilling.

Michael Sherwin is especially a joy to watch. His Dr Farquhar has a touch of the Reggie Perrin about him – somewhat manic, changeable, sadistic even. His at times unexpected delivery of lines and off-beat tempo is often brilliantly effective. Andrew Ryan convinces as Styler, wisely playing his character much straighter, though he strays into over-earnestness too often, and a slightly more relaxed approach in parts would help to ramp up the tension at the dramatic high points. Angie Smith as Paisley has the least thankful task, intermittently appearing on the stage as a nurse with a secret to hide. A few fluffed lines affected her concentration later on, which was a shame.

The overall look and feel of Mindgame is well-conceived. Minute variations in the set are cleverly pulled off and add to the unsettling atmosphere. Audience members can’t help but ask themselves, “Am I going mad or was that detail different a minute ago?” Intermittent lift music, designed to set your teeth on edge, also helps to sustain a disconcerting feeling. Perhaps more could have been done with the lighting, which is simply functional, and a backlit moment behind a screen wasn’t very successful.

Mindgame is delightfully bonkers. With major twists aplenty, it had us chatting all the way through the interval about where it might go next, and tallying up who correctly guessed which reversal after the final curtain call. Just don’t think too long and hard about whether or not what you’ve seen entirely adds up – or you might just drive yourself mad.

“Nothing is as it seems,” Donald Sutherland’s character remarks in the equally-unsettling Don’t Look Now. How appropriate that it is now used as a strapline for Mindgame. It certainly makes for a fun, entertaining and thought-provoking evening.