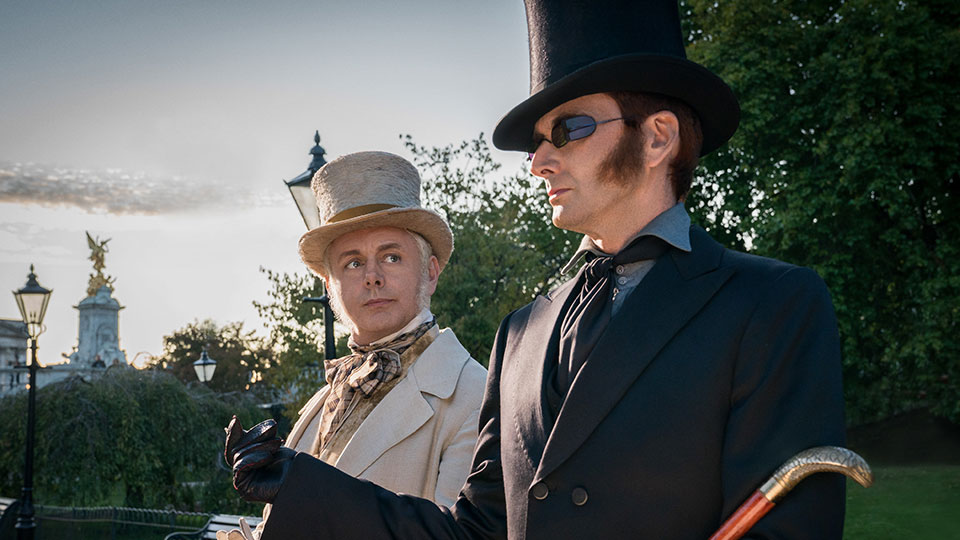 Good Omens is a six-part TV show based on the best-selling novel written in collaboration by Terry Pratchett and Neil Gaiman. The original novel was first released back in 1990, the same year I started secondary school. I know I read it in the early 90s and am fairly sure I owned a copy. I remember enjoying it immensely and that it was rather hilarious but I’d since forgotten much about the story.

Fans of the book have been waiting almost 30 years for a TV or film adaptation. Before Pratchett died in 2015, Gaiman made a promise to him that he’d make the show they wanted. With Good Omens heading to Amazon Prime Video at the end of May I’ve had the opportunity to see the first three episodes. Below are my impressions that I’ve tried to keep as spoiler-free as possible. However if you don’t want anything spoiled then I’d suggest you stop reading here.

Like the book, the show is a comedy that revolves around the birth of the Antichrist and the impending apocalypse. The story, narrated by God (Frances McDormand) who constantly breaks the fourth wall, begins some 6,000 years in the past at the Garden of Eden. Unlike the Bible’s version of the story, Adam (Anthony Kaye) and Eve (Schelaine Bennett) left the garden following encounters with the angel Aziraphale (Michael Sheen) and the demon Crowley (David Tennant). Eve was tempted by Crowley to eat the cursed apple and Aziraphale decided to be nice and give his flaming sword to Adam for protection.

Crowley and Aziraphale are the two central characters and they completely steal the show. The banter between the pair is just sublime. For me Tennant just edges it as the cocky demon who reminds me a lot of Bill Nighy’s character Billy Mack from Love Actually. However, Sheen is similarly brilliant as the fussy angel who is scared to do wrong. Over their 6,000 years on Earth they’ve become surprisingly good friends and found themselves rather enjoying life including fine food, rare books, designer sunglasses and alcohol.

When the son of Satan (Benedict Cumberbatch) is born, Crowley is tasked with delivering the baby to a group of satanic nuns. The plan is to switch the demon baby with the newborn of a U.S. ambassador (Nick Offerman) who will raise him until he brings about armageddon after his eleventh birthday. As you might expect, things don’t go as planned and the demon baby ends up in the wrong place with a normal family who name him Adam (Sam Taylor Buck). Meanwhile, Crowley and Aziraphale try to influence the normal child, Warlock, to be good, thinking they are sabotaging the end of the world for their own selfish reasons.

What follows is a wildly imaginative, bonkers journey through the ages, filling in the backstory of our two leads. It’s unpredictable, full of black humour and delightfully outrageous costumes. Along the way other characters include a witch named Agnes Nutter (Josie Lawrence) who has written a book of prophecies (part of the original title of the book), the Archangel Gabriel (Jon Hamm), a modern day witch hunter called Newton Pulsifier (Jack Whitehall) and an occultist called Anathema Device (Adria Arjona).

View some Good Omens images in our gallery:

Having enjoyed the first three episodes I can’t wait to see what’s in store for the final three. I have a feeling that they are going to be the best parts of the series. For fans of Pratchett, Gaiman or their original book I’d say Good Omens is essential viewing. For everyone else, the brilliant writing, comedy and stellar performances from Tennant and Sheen make it well worth a look.

Good Omens launches on Amazon Prime Video around the world on Friday 31st May 2019. The series is also set to come to BBC Two later in the year where it will air weekly.