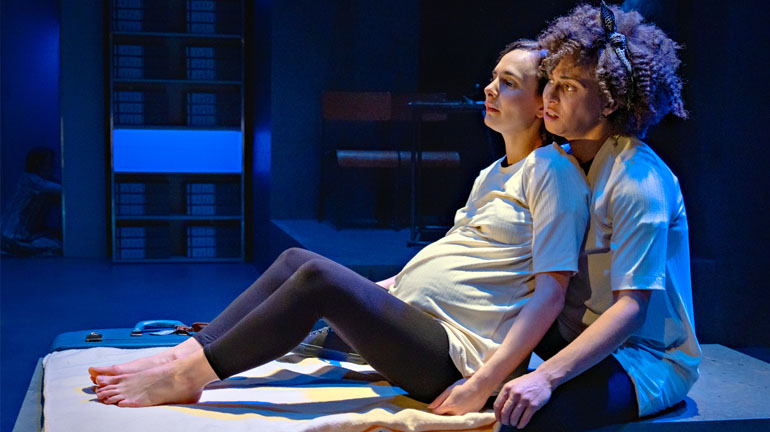 Following the all-male production of Around the World in 80 Days, Leeds Playhouse closes its pop-up season with their first all-female production — interrogating the rights and welfare of young single mothers in the early Sixties.

Amanda Whittington’s Be My Baby is a swift one-act study of the challenges facing teenage mothers in the mid-century, when many faced exile to mother-baby homes to give birth — and forcibly give away — their children. It’s a story many families have hidden within their own histories, yet perhaps due to the perceived shame of the period, remains a story often untold today.

Realised within a nimble 80 minutes, the script isn’t overburdened with dramatic incident, choosing to study its subject through a series of gently-paced conversations and collusions. Brief musical interludes inspired by the hits of Dusty Springfield steer the piece with a period flavour, whilst an angular set with harsh lines gives out an uneasy and unfriendly mood. Foremost, this is a play primarily exploring feelings, sensations and instinct above plot.

Anna Gray as Norma in Be My Baby. Credit: Anthony Robling.

The final outing for the women of the Playhouse Ensemble is a bold one, with dependably charged performances delivered by Tessa Parr and Jo Mousley. Simona Bitmate hands over a sensitively complex performance as Mary, whilst Crystal Condie provides an energetic counter as Queenie. Anna Gray expands the ensemble in a tender portrayal as Norma, another young mother lost within the system.

In a standout performance, Susan Twist delivers an impeccably acerbic Matron, conveying so much so effortlessly. There’s a remarkable clarity and purity to Twist’s diction, which makes you want to listen to her for hours. Even the most arbitrary lines take on a new significance through her delivery. This is another elegant, scene-stealing demonstration from a run of memorable characterisations this year.

Keeping things simple, Jacqui Honess-Martin’s direction embraces a playful use of domestic props to expand the show’s scope. An enterprising manipulation of a bedsheet into a new-born baby is well devised, and literally thrown to the wind as it unfolds back into nothing. It’s a smart visualisation of how illegitimate newborns at the time were quickly swept away, almost invisibly.

Be My Baby is a pointed, poignant and lean piece of theatre which reappraises recent history through a compassionate lens. Whilst not particularly heavy on story, it’s well-resourced in character and feeling, providing a heartfelt insight into the dilemma so many young women faced in the recent past. A gently revealing and thoughtful play with plenty to unpack.