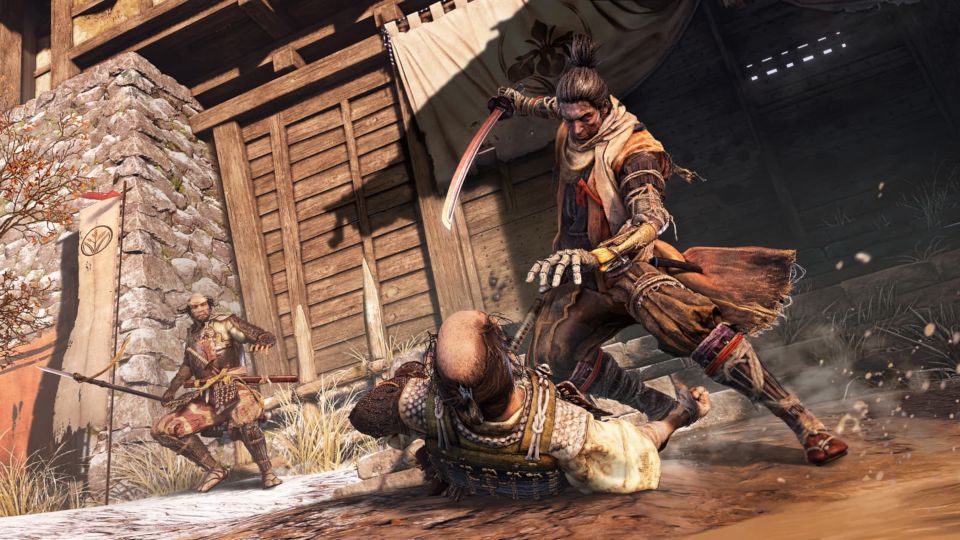 Sekiro: Shadows Die Twice has to be one of the most frustrating games, to the point of nearly throwing the TV out of the window, that I’ve ever played. And I bloody love it. It would be impossible not to mentioned Dark Souls in this review, so there, I’ve mentioned it. Shall we move on now?

Sekiro: Shadows Die Twice puts you in the shoes of Wolf, a one armed Shinobi charged with protecting the Divine Heir. His missing arm has been replaced with a prosthetic that plays a crucial role in the game but more on that later.

Set in ancient Japan, Sekiro is a beautiful looking game with areas including gorgeous forests, mountain tops, temple complexes and even other dimensions. Even the dark murky bits look nice and I was playing on a run of the mill Xbox One. On a high end machine this game would look stunning. Not only does it look good but it plays smoothly, for the most part, too. I only got stuttering in a couple of the later areas where the Xbox was struggling with all the water effects. Other than that my playthrough was like butter, albeit butter that got killed a lot.

If you’ve played other games by FromSoftware you won’t be surprised to hear that Sekiro is hard, very very hard. Forget everything you thought you knew about FromSoftware games as the old muscle memory and style of play is going to hinder you. Treat Sekiro with respect, approach it as though it’s something you’ve never heard of and you’ll fair much better.

As you would expect you start off the game with very few skills and not much equipment other than your sword and your prosthetic arm. This arm comes with a built in grapple hook giving the game a verticality previous FromSoftware titles have lacked. This has opened up a whole new way of exploring and finding ways to take out your enemies. Many areas have multiple ways to get about them and it’s well worth exploring to find all of the hidden bits of loot.

As you progress you earn XP which can be spent on unlocking various skills, all of which will aid you in combat one way or another. You should be warned that if you die will lose 50% of your unspent XP and 50% of any money you may be carrying meaning death comes with a heavy punishment. There are lots of opportunities to resurrect on the spot but this doesn’t mean you will survive long enough to get out of the situation that got you killed in the first place.

See the video below for an example of this:

Throughout the game you will also be finding parts for your prosthetic that allow you to unlock new options that include launching fire crackers to stun enemies, a heavy axe for splitting shields and a poison blade to name a few. All of the attachments can be upgraded and they are often the key to taking down some of the tougher enemies and bosses in the game.

Getting around in the game is a breeze. Right from the start you can fast travel between any sculptors idols that you have found, although it’s fun, and pretty dangerous, to travel on foot as long as you don’t need to travel too far.

The combat is what makes Sekiro shine above so many other games out there. It is sublime and rewards skill over button bashing. The Shinobi art is based on breaking your enemy’s posture enabling you to deliver a deathblow. You can achieve this by being aggressive but also by parrying your enemy’s attacks. This art of parrying is what will make this game much easier, in relative terms, than it would otherwise be.

Oddly, despite knowing this, I still finding myself trying to dodge and out maneuver rather than parrying. Dodging is important, but getting the hang of parrying is essential. To parry you need to press your guard button just as your enemy is about to hit you. If you button bash to try and do this you’ll die very quickly, as precision timing is key.

The boss fights in Sekiro are another area that makes this such a standout game. There are 13 essential bosses to take down plus numerous optional mini-bosses. Some of these encounters are laughably easy but some took me hours to master. These bosses take numerous deathblows to takedown and of course come at you with bigger health pools, much stronger attacks and various abilities all designed to make life hard for you. One of my favourite encounters has to be the Guardian Ape who literally throws his poo at you to try and kill you.

Each boss will require something different from you. Some will need expert parrying skills, others can be made much easier by using the correct prosthetic but all of them pose their own unique challenges. I highly doubt you’ll be taking any of them out without dying on you first playthrough.

There is much to encourage you to attempt multiple playthroughs. There are numerous endings available resulting in different boss fights near the end of the game, you’ll probably have missed at least one of the mini-bosses and you most certainly won’t have seen everything in the game your first time around. Also there’s the reward for completing the game, you get to do it all again in new game plus and everything gets harder.

To sum up, Sekiro is not for the fainthearted. If you want a casual game to pass the time with then this is not for you, don’t waste your time, money or sanity. If on the other hand you’ve played and enjoyed the previous games by FromSoftware you’ll already have an idea of what you’re getting yourself into. It is an absolutely brutal game that will punish your mistakes with a quick death. Stick with it though and when you do succeed you’ll never feel a better high in gaming.