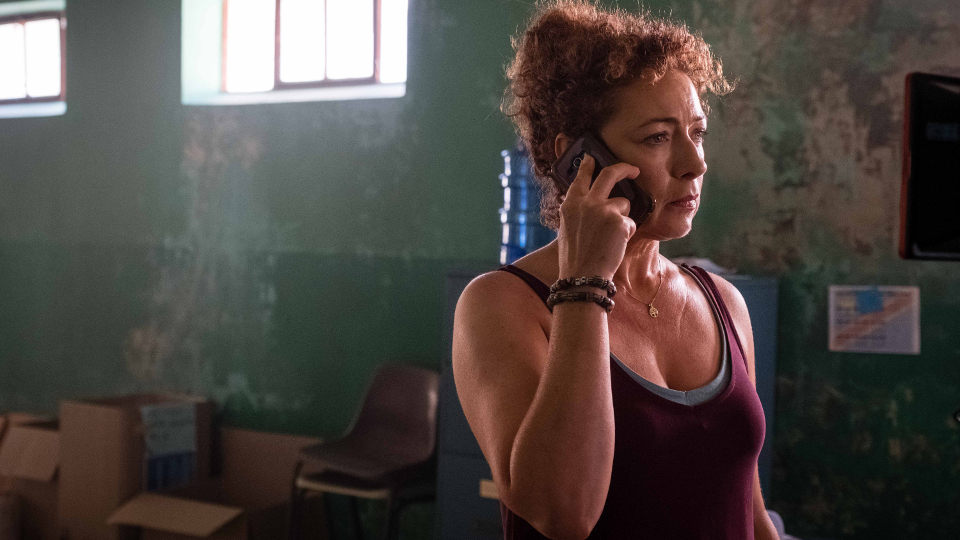 On the fifth episode of The Widow, Georgia (Kate Beckinsale) resorted to extreme measures to learn more about Will’s disappearance.

The episode opened up in Kinshasa in the Democratic Republic of the Congo (DRC), General Azikiwe (Babs Olusanmokun) was interrupted while eating by a knock at his door. He opened it to find a woman stood there, he said he knew her and it was revealed that the woman was Gaëlle (Luiana Bonfim). She was the one he gave the Green Lion bag to that contained the laptop bomb for Sankuru Airways Flight 19.

Before we got any answers to that shock opening, we returned to the end of last episode with Georgia pointing a gun at Pieter (Bart Fouche). She asked where Will (Matthew Le Nevez) was and Pieter replied that he’d told her to go home. He was the one who sent the hire car. Pieter gave up his pistol and said that Georgia couldn’t shoot him because she needed him. She agreed but said she could still hurt him.

She told Pieter that her friend Emmanuel (Jacky Ido), who Pieter met when he was pretending to be Hennie Botha, was killed in the hire car when it blew up. She said Will had been locked in that building, a large truck went past and Georgia used the noise as cover to shoot Pieter in the leg. He complained that he was bleeding but she told him to tie it off and then asked the question again.

This time he talked and said that Will had been there a long time ago. He said a bunch of aid workers got caught up in a storm and came there for shelter. After it cleared up they left and Will went to catch his flight. Georgia didn’t believe him and showed him the photograph. Pieter said Will left his cap behind and that the man in the photograph wasn’t him. Georgia didn’t believe him but Pieter started rambling about the mine. She again tried to get him to confirm that Will was alive and he warned her again to just go home.

Meanwhile, Judith (Alex Kingston) returned home to Kinshasa and once inside she sat at her desk. She placed her glasses down and picked up a spider brooch. A flashback to 7 years earlier showed Judith on a phone call, she told someone that she wasn’t interested and that meeting up wouldn’t change her mind. She then said goodbye and hung up. Joshua (Matthew Gravelle) asked if she was ok and she said it was just a sales call. She took another call and appeared to get some bad news, after confirming it was her all she said was “When?”

Judith’s mother had died and she went to collect her things from St. Agatha’s hospice. She had a meeting about her mother’s estate which was worth almost £200,000 and the following scene showed part of the funeral. While looking through some sympathy cards a woman named Siobhan introduced herself and they chatted. It seems they spent the day together and Judith thanked her for cheering her up. As they were to part ways, Siobhan leant forward and kissed Judith which took her by surprise. She left Judith with her number and walked away.

Back in the present, Judith stood up and walked away from her desk. A man appeared out of nowhere and stabbed her through the chest. She fell to the floor, rolled over and tried to crawl away. She screamed as he grabbed her foot and stabbed her in the back of the thigh. He then proceeded to stab her multiple times in the back before rolling her onto her back and leaving her for dead. Later that day, Joshua arrived and found her barely alive, he called an ambulance.

Back at the mine, Georgia asked Pieter for his phone. He handed it over and gave her his pin code. She unlocked it and began looking through it. He asked her if she ever thought that she might be better off not knowing as ignorance is bliss. She said no as ignorance is just ignorance. Through the window, he saw one of his men approaching the building. He started to shout and suggested that Will might be safer where he was. Georgia escaped out the back as his men came to his aid and he told them to kill her.

Georgia fled into the jungle as they fired at her. She slipped and slid down an embankment and waited as one of the gunmen ran past. As she went deeper into the jungle, Pieter pursued her and picked up her trail, sending one of his men after her. It was beginning to go dark so she took refuge in an abandoned building and headed to the first floor for a better vantage point. As she moved around she was unaware that Pieter was below her on the ground floor and could hear her moving about. He crept up the stairs with his pistol drawn but Georgia was waiting and shot him. Before fleeing she emptied his pockets, taking his wallet, phone and keys.

Another flashback showed a time Judith took a call from Joshua who wanted to know when she’d be back. She told him probably a couple of weeks. When she hung up it was revealed that she was in bed with Siobhan. A different day, Judith met Siobhan from work and they went for a meal. It seemed something was wrong but Siobhan said she’d lost a big contract at work. She them surprised Judith with the spider brooch which had belonged to Judith’s mother but been missing. Siobhan had found it for her in her mother’s belongings. She asked for a favour in return – that Judith stay with her instead of returning to the DRC.

Back in Kinshasa, the man who stabbed Judith downed a quarter bottle of whiskey then knocked on the door of General Azikiwe. Azikiwe spotted blood on his shirt but he said a dog tried to bite him so he stabbed it. Sat outside Azikiwe asked him if the things they had done ever bothered him, the man said he tried not to think about them. He told him about Gaëlle knocking on his door but explained that it wasn’t real and he was seeing things. He also kept seeing a woman cleaning his house.

Georgia looped back to the mine and stole a truck. She was chased by gunmen on foot. A little way down the road she spotted Adidja (Shalom Nyandiko). She stopped and asked her to get in the truck. Adidja did as she was asked and they drove off.

At the hospital, Joshua faced a nervous wait as the surgeons worked on Judith. One of the surgical team asked Joshua his relationship to Judith and if there was anyone else they could call, but he said no. Another flashback revealed Siobhan struggled with her company. Judith offered up the money her mother left her to help Siobhan keep her company afloat. She then revealed that she had spoken with Joshua and planned to stay in the UK and work from there. However, after giving her the money she disappeared and Judith couldn’t contact her. She went by the office and found out that it wasn’t her company but a shared office space. One of the workers explained that he knew Siobhan as Sally Newell. It seems the whole thing was a con and she stole the money Judith gave her.

Georgia and Adidja arrived in Goma where Georgia rented a room. She took another look through Pieter’s phone and found lots of missed calls from a contact listed as ‘JG’. Georgia called the contact which went to Judith’s voicemail! She left a message asking why Pieter had her number.

Elsewhere, Martin (Charles Dance) and Ariel (Ólafur Darri Ólafsson) were on a flight together back to the DRC. Martin asked if Ariel was ok and he said he’d been on many flights since but this was something else. He talked about being on the run since he left the Congo but Martin revealed he knew that he was running before hand too, from fraud. Ariel said he made mistakes looking after people’s money. Due to the problems he borrowed money but feared the humiliation of disappointing everyone more than prison. He ran to Africa because he was selfish and a coward. He said returning to Kinshasa was the only brave thing he had done.

In Kinshasa, Martin received a call from Georgia. She told him that she’d found Pieter, who was now dead, and his phone had calls from Judith. Martin revealed that he was in Kinshasa with Ariel, who had survived the plane crash. Georgia argued that the only survivor was a woman who died. Martin explained that Ariel saw everything and that it was a laptop bomb that brought the plane down. The reports weren’t true and they would get to the bottom of it.

Judith survived the operation and was placed in recovery. Another flashback showed her trying to track down Sally Newell and she discovered that she had worked in patient services at the hospice where her mother died. Judith eventually managed to contact Sally by phone and she told Judith that she had been there for her mother. She took the money because she felt she deserved it more than Judith who only saw her mother every 3 months. Judith hung up on her and went back to the DRC.

When she arrived she made a call to the man who had been calling her to arrange a meet. They did so at a bar and it was revealed the man was General Azikiwe. He needed the precious metals from the mine, taking over the border to Rwanda. Judith offered up not only her aid vehicles but her network of contacts throughout the Eastern Congo. He was suspicious why she had changed her mind and it was the bad experience with Sally that pushed her into it. This is when Azikiwe introduced her to Pieter Bello.

Back in the present, Georgia tried to take Adidja to a centre that would help her. She wasn’t happy with the idea so Georgia let her go with her. Martin called to say that Judith had been attacked and despite surviving the surgery she had died from her injuries. He vowed to find who planted the bomb. He confirmed that Judith had a connection to Pieter and arranged a meet with Georgia at Judith’s house.

At the end of the episode, Azikiwe received news of the attack on his mine. All his soldiers and Pieter were dead but there was news of a white woman, the widow that Judith warned him about. He told his visions of the two women that he killed that he was thinking they could use some company.

Can’t wait for the next episode? Check out our preview of The Widow 1×06 The Spider and the Web.

The sixth episode of The Widow airs Tuesday 23rd April on ITV at 9pm.