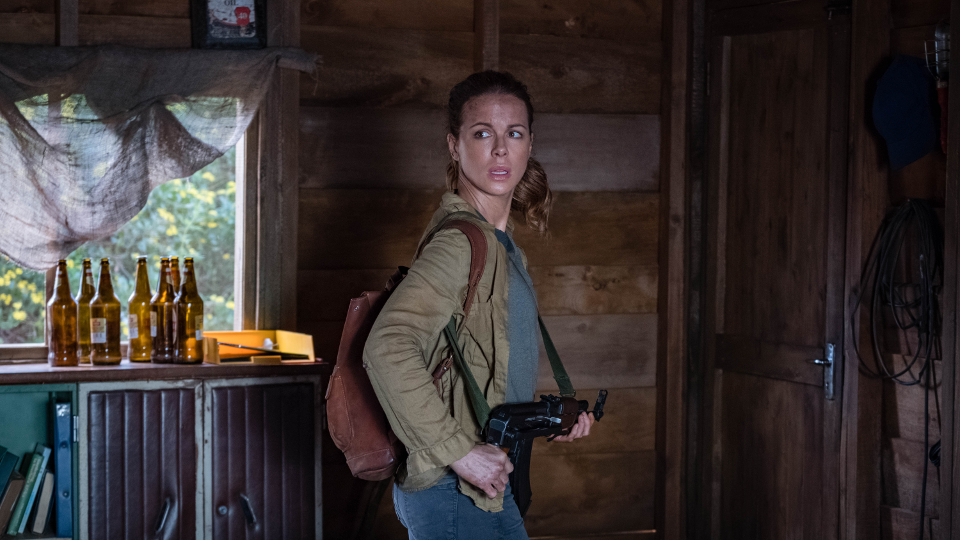 On the fourth episode of The Widow, Martin (Charles Dance) and Ariel (Ólafur Darri Ólafsson) sought to determine the identity of the army general linked to the plane crash.

In the episode a series of flashbacks revealed that Georgia (Kate Beckinsale) and Will (Matthew Le Nevez) had a baby daughter named Violet. They used to trace the letter V on her back with their fingers to send her off to sleep. One day Violet died in her sleep and they struggled to move on for over 6 months. One day it all became too much for Georgia and she attempted to commit suicide.

In the present day, Georgia recovered her wedding ring from the man she killed. She then completed the journey to Kisima with the aid workers. Their she asked around but everyone seemed scared of Pieter (Bart Fouche). One woman spoke up, it was the wife of the man that Pieter had executed by Adidja (Shalom Nyandiko).

The information led Georgia to a mine where Pieter’s militia group had massacred everyone in order to take it over. Georgia ran into Adidja and said she was a doctor. Adidja had her tend to one of her group who had a bullet wound.

Georgia found out that the militia knew Louise (Mathilde Warnier) who had been talking precious metals to Rwanda for Pieter in exchange for cash. Georgia had Louise speak to Pieter and tell him about her. He sent his men out to kill Georgia but while they were gone she got inside his cabin. There she discovered a small locked room that had the letter V scrawled all over the walls. It must had been where Will had been held prisoner. She confronted Pieter and asked what he had done with her husband.

Elsewhere in the episode, in Rotterdam, Martin (Charles Dance) spoke to Ariel (Ólafur Darri Ólafsson) to try and identify the general who put the bomb on the plane. Ariel struggled to remember but later came up with the idea that if they went back to the DRC he would be able to recognise the voice of the general. He thought he could use himself as bait to draw him out.

The next episode is Poteza. As she finally comes face to face with Pieter, Georgia resorts to extreme measures to learn more about Will’s disappearance. Judith’s return to her home brings back memories from her past, but she doesn’t foresee an unexpected twist of fate.

The fifth episode of The Widow airs Monday 22nd April on ITV at 9pm. Preview it with our gallery: