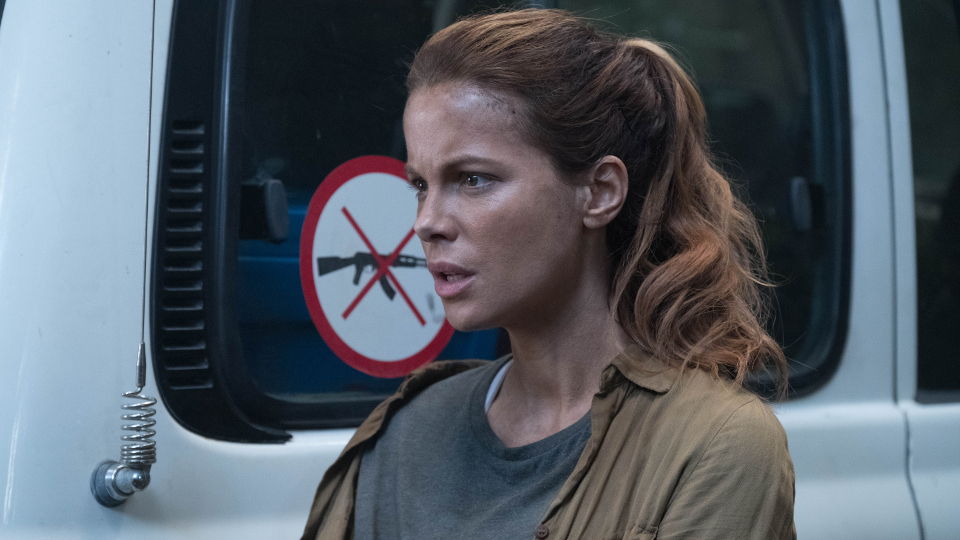 On the third episode of The Widow, Judith (Alex Kingston) arranged a lift for Georgia (Kate Beckinsale) with a group of medical aid workers.

The episode opened up Namoya in the Democratic Republic of the Congo (DRC). Child soldier Molisho (Likho Mango) decided to run away but was stopped by his friend Adidja (Shalom Nyandiko). She asked him what he was doing and he said running and asked if she was going to stop him. She lowered her gun and let him flee. When she turned around she saw that Pieter Bello (Bart Fouche) had been watching her.

Back in the UK, Martin Benson (Charles Dance) took a phone call from Georgia. She was very upset at the death of her friend Emmanuel at the end of last episode. Martin told her to get back to the UK but she refused. She told him she was going to head out to Kisima with Judith and he said it wasn’t a good idea. Once again she pleaded for his help but it took a conversation with his wife to change his mind.

On the flight to Kisima, Judith pointed out the area where Will’s plane went down. When they arrived, Judith managed to arrange a lift for Georgia with the cover that she was a journalist writing about their work in the region. At the local DRC Aid center Georgia found some sketches that Will had drawn on his last trip. Judith said the local militia groups should leave her alone but couldn’t guarantee anything. Judith then revealed that there was a rumour that Will had an affair with the wife of a general in the Congolese army. She said he was terrified that the general would find out. Georgia dismissed it as only a rumour but Judith said it was the only explanation she could think of for his disappearance.

Back with the child soldiers, Adidja was put in a car with Pieter to an unknown destination. They had a friendly chat about his daughter. He then said he’d seen her let Molisho go but that he wouldn’t tell anyone. However, in return he had a task for her at their destination that she must do for him to keep her secret.

When they arrived at a small village, armed men rounded everyone up. Pieter called for a man named Kalehe Mampata (Mavuso Simelane) to come forward. He said that he had done a good job for him that he should be proud of but that things had changed. Kalehe begged for his life but Pieter took a pistol and placed it in Adidja’s hands. She took aim, closed her eyes and shot him dead. They all then left as the man’s wife screamed as she held her dead husband.

At DRC Aid, Georgia met the aid workers giving her a lift who were Tom Jansen (Howard Charles), Louise Chartrain (Mathilde Warnier) and Fabrice (Richard Lukunku). As she left Judith told her not to do anything silly. Louise was the project co-ordinator and rather unfriendly. The played loud French hip-hop on the 4-5 hour journey.

On their journey they were stopped by an old man who told them not to continue on the road they were on. Apparently there was militia ahead and they were the sort who would take their money and medical supplies. He suggested an alternate route for them to take which would be safer. They took his advice but it appeared to be a trap when they found their path blocked by a fallen tree and two armed men appeared and demanded they empty their pockets. Georgia wasn’t carrying anything so they took her wedding ring. After taking their mobile phone, they also took their truck with all the medicine and supplies.

They continued their journey on foot but soon came across their truck. The old man who had deceived them earlier was sat at the side of the track. The armed men appeared and complained that the truck had broken down and they couldn’t start it. They demanded that the aid workers fix it for them and Fabrice was punched in the stomach. With no choice they set to work on repairing the truck.

One of the gunmen beckoned Georgia to him, he touched her face and grabbed her breast. She recoiled and tried to pull away. Fabrice and Tom had managed to fix the truck and asked that they leave them alone. The gunmen discussed taking Georgia with them then dragged her to the truck. She fought back, kneed him in the groin then smashed a large rock into his face. He dropped his gun which she picked up and aimed it at him while he lay on the floor. His accomplice drew a pistol and Georgia put two shots into him. The other man got up and ran away.

Elsewhere in the episode, in Rotterdam, Ariel Helgason (Ólafur Darri Ólafsson) was called in for news about the trial. It was bad news for him as they felt he wasn’t right for the surgery due to the damage to his optic nerve. Understandably upset, Ariel left and we got a flashback to 3 years earlier.

We joined him in Goma before the accident as he took a taxi to the airport for the flight to Kinshasa. On his way inside he saw Emmanuel’s wife Gaëlle (Luiana Bonfim) been given the Green Lion rucksack. As he went inside we also got to see that he was the man who picked up the pen when Will (Matthew Le Nevez) dropped it and give him it back. We also got to see him board the plane where he was sat next to a woman named Dominique (Pamela Nomvete). Last episode, when Beatrix (Louise Brealey) looked into the crash she discovered that the name of the sole survivor was Dominique.

During the flight, Ariel left his seat to visit the toilet. On his way he heard intermittent beeping and realised it was coming from Gaëlle’s bag. He mentioned it to her and she investigated, finding a laptop inside. Ariel was asked by a flight attendant to return to his seat and shortly after he did the laptop exploded, blowing a hole in the side of the plane. The cabin lost pressure and Ariel and Dominique held hands as it plummeted into the jungle.

We got to see the aftermath of the crash with wreckage strewn across the jungle. It was night and when Ariel regained consciousness, he found himself still strapped to his seat but in a lot of pain from his injuries. The only other survivor appeared to be Dominique and she seemed remarkably well. They decided to try and walk to find help or more survivors.

Eventually Ariel could walk no further and had to sit down and rest. He told Dominique what he knew of the crash, about the woman with the bag and the beeping laptop that exploded. He told Dominique to leave him, find help and tell the authorities what happened.

The next day Ariel was found, loaded onto a truck and taken to the local hospital. When he awoke, Dr. Pascal Bourg (Francis Chouler) explained the procedures they had done including a chest tube to drain the internal bleeding. His lungs had collapsed, he had five broken ribs and a severely lacerated kidney that they had to remove. Ariel commented that he couldn’t see properly and the doctor said he thought he had the beginning of retinal hemorrhage in both eyes. It would need to be treated once he was well enough to be transferred to Kinshasa.

Ariel asked about Dominique and the doctor showed him a news article. It showed that Dominique had died from her injuries. There was also a photograph of the man who gave Gaëlle the bag with the bomb. Ariel knew that Dominique had been killed and that he couldn’t ever reveal that he was on the plane or he might face the same fate. So he lied and changed his name. He got out of the hospital and made it across the border as soon as he could but it was too late to save his eyesight. Back in the present, after hearing his story, Beatrix decided to leave saying her life wasn’t this complicated and she wanted things as they were.

Later, Ariel made a call to Beatrix and left her a voicemail. He said he was leaving and apologised for disappointing her. He said it was nice to know her, that he wouldn’t bother her again but wished that the operation was successful for her.

At the end of the episode, as Ariel was leaving his hotel he was told he had a visitor. It was Martin, he introduced himself and said he needed to talk to him about the plane crash. He said he knew who he was and what he had done.

Can’t wait for the next episode? Check out our preview of The Widow 1×04 Violet.

The fourth episode of The Widow airs Tuesday 16th April on ITV at 9pm.